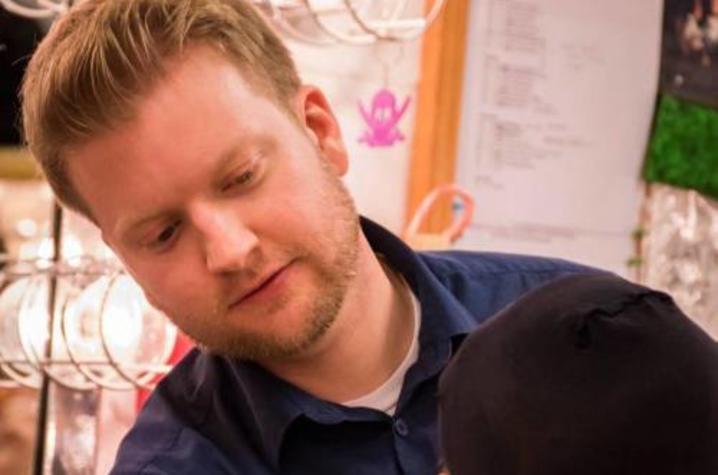 LEXINGTON, Ky. (April 12, 2019) — As University of Kentucky Department of Theatre and Dance embarks on its journey to Far Far Away, the College of Fine Arts sat down with UK theatre alumnus Daniel Townsend to learn a little bit more about his career in makeup and wig design, as well as details on how he helps Shrek become the green ogre we all grow to love.

College of Fine Arts (CFA): You're an alumnus of the University of Kentucky. Can you give a brief description of your time here, what you studied, and how do you think that impacted your current career?

Daniel Townsend: I graduated in 2005, which is crazy to think that it was over a decade ago. My first major was in the studio arts department, but I attended one performance in the theatre department. That performance hooked me into theatre. I studied costume construction and design while in the theatre department, but after taking the stage makeup course I knew that hair and makeup was what I wanted to do. And I am still doing that today as a freelance artist. I received a master's from the University of Cincinnati in wig and makeup design and have worked and taught professionally ever since.

CFA: You are the makeup designer for "Shrek The Musical." How did you come about this position? Are you excited to be back? What's your favorite part of the job?

Townsend: Since my graduation, I have done a few small projects for the department. My professors were very impactful in my life, not just in my career and education. It has always been important for me to keep in contact with them, and some I talk with on a regular basis. I was very excited when I was contacted about designing makeup for "Shrek The Musical." It is the first time that I will have designed anything for the theatre department since before my college graduation. My favorite part of the design has been contributing to the success of the theatre program at UK. Yes, I enjoy the artistic element, but it’s exciting for me to work with the current students.

CFA: How is this production similar and/or different to productions you have worked on before? Is there anything unique or interesting that you think might be intriguing for our readers to learn?

Townsend: The majority of work that I deal with is making wigs or designing hair for theatrical performances. It’s not often that I get called to design just makeup. "Shrek the Musical" is one of those exception shows. There has to be makeup, not only on Shrek and Fiona, but on the fairytale creatures that live in the forest. Often, a performer will play multiple characters, and makeup can help differentiate between those characters. Also, as in "Shrek The Musical," the fairytale characters are so iconic (i.e. Peter Pan, Red Riding Hood, Pinocchio) that to do them justice their faces need to fit with their costume and the environment of the show.

CFA: With a show like "Shrek," how do you transform humans into fantastical, storybook characters? What does the process look like?

Townsend: The first step of every design process is the research. The one thing about designing is trying not to copy notable designs already created. "Shrek The Musical" is already wildly popular. I wanted to familiarize myself with the Broadway production, so I knew what not to reproduce. Once I received the costume charts that described what each costume looked like, I took to Pinterest and created character boards. For animal characters such as the three little pigs or the Big Bad Wolf, I looked to pigs and wolves for inspiration, then I paired those with artistic makeups or pictures of wild hair. Basically, I browse for anything that evokes, in me, the feeling of the character. Once I’ve got several photos I make a detailed sketch of the makeup. For this production, I used watercolor pencils to create my designs, but sometimes I’ll use Prismacolor markers or watercolor paints. As I draw, I assemble the pieces from each research photo to create the final character.

CFA: Probably the big question, how long does it take to turn Shrek green? Can you talk a little bit about that process?

Townsend: For the UK Theatre production, it will take a makeup crew of two about 45 minutes to complete the transformation. It’s not just a little matter of green paint and the look is done. Shrek is actually a very complex character transformation. It starts with two different theatrical prosthetic pieces. The largest is a cowl that goes over the head. The cowl has an oval space for the face to fit through. It also contains two ogre ears and neck rolls. This piece actually drapes over the shoulders and chest to add bulk to the character, but the audience never sees the edges. The second prosthetic piece is the nose, cheeks and chin. This piece also has a hole for the mouth and when it’s positioned will make the face appear bulbus and large. To make application easy, the two pieces will be pre-painted with a combination of green, yellow and brown makeup. Once the foam is applied to the face, the colors will be blended onto the face to match.

CFA: Fiona goes through a complete transformation. If you're allowed to reveal some musical magic, can you describe how it's accomplished?

Townsend: I won’t go into complete detail because, for the audience, this is truly one of those magical moments. I can say that there will be four makeup crew members, along with the army of wardrobe students working to bring the ogress to life. For every fast change there is always an army of people behind the scenes making it come together. The great thing about UK Theatre is that the student body is passionate about their craft; it really shows in the final product.

Townsend: Sure. Since I was a student, the UK theatre department has really evolved. There are more opportunities for students to engage in acting and the technical arts. For my part, I get to expose students to theatrical makeup and show them the value of the profession. Many of them don’t know how careers can evolve after graduation. It is a pleasure to impact the theatre department once again and give back to the department that helped shape me to what I am.

“Shrek The Musical” takes the stage again 7:30 p.m. Friday-Saturday, April 12-13, and 2 p.m. Saturday and Sunday, April 13 and 14, in the Guignol Theatre located in the Fine Arts Building. General admission tickets are $20 and student tickets are $15 with a valid UK student ID. Processing fees will be added during transaction. Tickets can be purchased from the Singletary Center for the Arts ticket office by phone at 859-257-4929, online at www.scfatickets.com or in person at the box office.