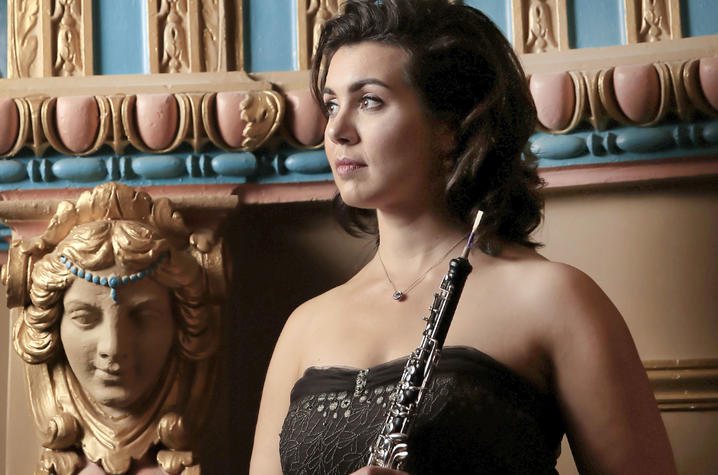 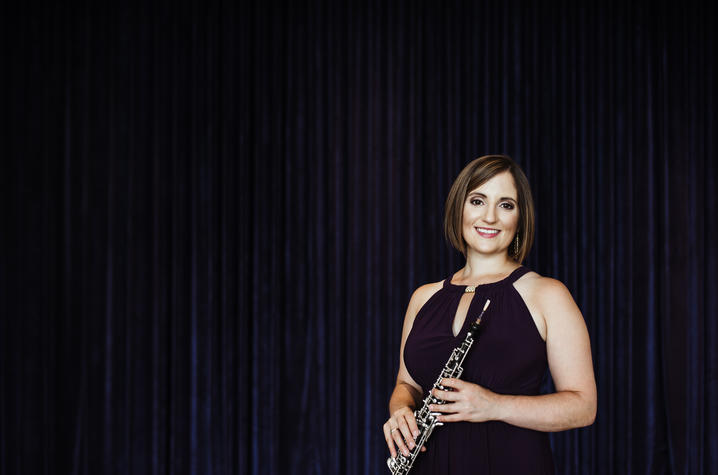 LEXINGTON, Ky. (Jan. 11, 2019) — The University of Kentucky will welcome music scholars and guest artists Jaren Atherholt and Jennifer Potochnic from Kentucky and North Carolina to perform works for the oboe and English horn with the university’s own ToniMarie Marchioni 7:30 p.m. Tuesday, Jan. 15, at the Singletary Center for the Arts Recital Hall for a free public recital.

The Faculty and Guest Artist Recital will feature a selection of works for the oboe and English horn by Carlo Yvon, Jeffrey Rathbun, Benjamin Britten, Wolfgang Amadeus Mozart, Stephen Gryc and Ludwig van Beethoven while spotlighting the musical talent of Assistant Professors of Oboe Jaren Atherholt, of University of North Carolina School for the Arts (UNCSA), and ToniMarie Marchioni, of UK, and Jennifer Potochnic, lecturer of oboe and music history at University of Louisville (UofL).

In addition to her faculty position at UNCSA, Jaren Atherholt is the principal oboist of the Louisiana Philharmonic Orchestra, a position she has held since 2007. Originally from Fairbanks, Alaska, she left home at the age of 16 to pursue oboe study at Interlochen Arts Academy with Daniel Stolper and continued her education at Cleveland Institute of Music and at Rice University.

Atherholt’s credentials include studying with John Mack at the Cleveland Institute of Music and with Robert Atherholt at Rice, two seasons as principal oboist of Sarasota Opera Orchestra, and service as founding executive director of Lyrica Baroque, a chamber ensemble and nonprofit organization based in New Orleans.

ToniMarie Marchioni, oboist at the UK School of Music, enjoys a varied career as a performer, educator, arts advocate and administrator. With performances praised as “excellent” and “elegantly rendered” by The New York Times, she has performed in Europe, South America, Asia and throughout the United States. For the 2017-18 season, she was acting second oboe for the National Symphony Orchestra in Washington, D.C. Marchioni is also a member of the IRIS Orchestra (Memphis, Tennessee) and Decoda (New York, New York).

Appointed to UK’s faculty in 2013, Marchioni is a frequent lecturer/performer at International Double Reed Society conferences and a sought-after clinician and pedagogue. Recent masterclasses and clinics include Indiana University, Cincinnati Conservatory of Music, Vanderbilt University and University of Wisconsin-Madison. Marchioni’s performances and interviews have been broadcast internationally: as a chamber musician on BBC Radio 3's “Composer of the Week” and KUHF’s “The Front Row”; as a featured soloist on the NPR/PRI radio program “From the Top”; as an orchestral musician on NPR’s “Performance Today,” Classical WETA's “Listen Live” and “NSO Showcase,” and PBS’s “Live from Lincoln Center”; and as a “castaway” on WITF’s regional program “Desert Island Discs.” Also, an avid writer, she was a frequent contributor to the Juilliard Journal and has been published in Carnegie Hall’s playbill as a featured writer and program note annotator.

A native of Mechanicsburg, Pennsylvania, she holds a bachelor’s degree from Harvard University, and master’s and doctoral degrees from Juilliard. Her teachers include Elaine Douvas, Eugene Izotov, Pedro Diaz and Mark McEwen.

Jennifer Potochnic has had a successful career as an orchestral and chamber musician throughout the United States and Europe with performances described by the New York Concert Review as “polished, dynamic and riveting” and by the South Florida Sun-Sentinel as “fluent and evocative.” She has held positions with the Palm Beach Opera, Palm Beach Symphony, Jacksonville Symphony, Columbus Symphony and the Louisville Orchestra as well as appeared regularly with the Sarasota Orchestra, Florida Philharmonic and Atlanta Symphony.

Potochnic joined the faculty at the UofL School of Music in 2009 where she teaches oboe, history and courses in arts entrepreneurship. She is a strong advocate for new music with a special emphasis on the repertoire of composer recipients of the prestigious Grawemeyer Award. She has commissioned many works including a recent consortium project, “Inner Voices,” a piece written by Mark Kilstofte in memory of her teacher John Mack.

Currently Potochnic is completing a doctoral degree at the College-Conservatory of Music in Cincinnati. She has also attended Louisiana State University, the Cleveland Institute of Music and Manhattan School of Music. Over the years, she has studied with the finest oboists and pedagogues in the country including John Mack, Mark Ostoich, Elaine Douvas and Joseph Robinson. Potochnic’s oboe d’amore collaboration with trumpeter Mike Tunnell can be heard on the recording “Out of the Forest.”