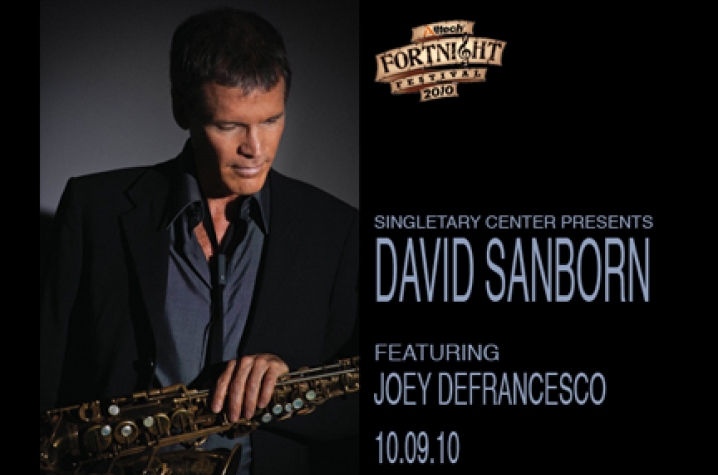 LEXINGTON, Ky. (Oct. 7, 2010) − Six-time Grammy award-winning saxophone player Dave Sanborn swings into town as the next act presented in the University of Kentucky Singletary Center for the Arts (SCFA) Signature Series. This concert, featuring the Dave Sanborn Band and jazz organist Joey Defrancesco, takes to the stage at 7:30 p.m., Saturday, Oct. 9, in the SCFA Concert Hall. This concert is made possible with support from the Alltech Fortnight Festival and the UK Spotlight Jazz Series.

Renowned and revered the world over as one of the greatest saxophone players of all-time, David Sanborn is an artist whose music has inspired countless other musicians while creating a body of work that spans the genres of rock 'n' roll, r & b, pop and jazz. A naturally gifted performer, Sanborn has helped define the saxophone's modern sound while influencing a generation.

Born in 1945, in Tampa, Fla., Sanborn contracted polio at age 3. As a part of his rehabilitative therapy, he was introduced to the saxophone. It was an introduction with consequences quite beyond the imagination of his parents, doctors or anyone else. The selection of the alto sax, a favorite from Sanborn's days spent listening to the radio, would prove to be a pivotal moment in the development of his sound.

Growing up in St. Louis, Sanborn was inspired by the legacy of great Chicago blues artists who would play their way through town. Before he finished high school, he had played with names such as Albert King and Little Milton.

"When I was 17 or 18, and it was time to figure out what to do with my life, I realized that I didn't enjoy anything as much as I enjoyed playing music," Sanborn said. "I felt I had no choice, that I HAD to become a musician. Either that or steal cars."

Sanborn studied music for a year at Northwestern University before transferring to the University of Iowa. By 20, he was married and the father of a son, Jonathan Sanborn, for who each of the artist's records have been dedicated. A phone call from an old friend in San Francisco, drummer Teddy Steward, convinced Sanborn to head for California. It was while in San Francisco that another old friend, Phillip Wilson, who had recently joined the Butterfield Blues Band, invited the saxophonist to Los Angeles to sit-in on recording sessions with the band.

"I got on a Greyhound bus from San Francisco to L.A., took a bus into Hollywood, slept on the floor of Phillip's hotel room and went to the studio with him." Sanborn said. "Just had my horn. I think it was because I looked so pathetic, standing there with my horn, Paul Butterfield said, 'Why don't you just come and play on a tune?' I sat in and I did ok. And I was with Butterfield for almost five years."

Those five years saw Sanborn, as a member of the Butterfield Blues Band, play Woodstock, among many other classic gigs. But the demise of that band only brought the musician new opportunities and within a week he was touring with another legend, Stevie Wonder. Sanborn played on Wonder's "Talking Book" LP, with The Rolling Stones, and then toured with David Bowie, eventually performing his celebrated solo on Bowie's 1975 recording "Young Americans."

It was also in 1975 that Sanborn released his first solo album "Taking Off." The record enjoyed respectable sales and while Sanborn continued working with other performers, such as Paul Simon and James Taylor, he continued flexing his muscle as a solo artist, eventually scoring popular hits with 1980's "Hideaway" and 1981's Grammy award-winning, "Voyeur."

In 1983, Sanborn branched off in a new artistic direction with his first acting role in the Italian film, "Stelle Sulla Citta," for which he also scored the soundtrack. It was also when the musician released his landmark "Backstreet" album, which proved a major hit in the world of contemporary jazz.

Sanborn was awarded his second Grammy in 1986 for the album "Double Vision" and in the late 1980s hosted musical television program "Night Music." Offering up old films of jazz legends, music talk and jams by an eclectic roll call of musicians from different fields, "Night Music" is remembered among music fans as a groundbreaking and genre-bursting show. Produced by "Saturday Night Live" creator Lorne Michaels, "Night Music" brought artists as diverse as Sonny Rollins, Leonard Cohen, Hank Crawford, Conway Twitty, Sonic Youth, Al Green and the Pixies together on one program.

Throughout the 1990s and into the present, Sanborn has continued to tour and record having amassed a wide fan base around the world. The albums "Pearls," "Songs From The Night Before," and "Essentials" reflect the essence of an artist at peace with his own sound and development, yet eager to explore the possibilities of his instrument and his abilities.

To check out a selection of audio and video of Dave Sanborn, visit his website at www.davidsanborn.com/videoaudio.html.

Tickets for the David Sanborn concert are based on seating location and range from $25 to $32. A processing fee will be added upon completion of transaction. Tickets can be purchased through the Singletary Center Ticket Office at (859) 257-4929, online at www.singletarytickets.com, or in person at the ticket office.