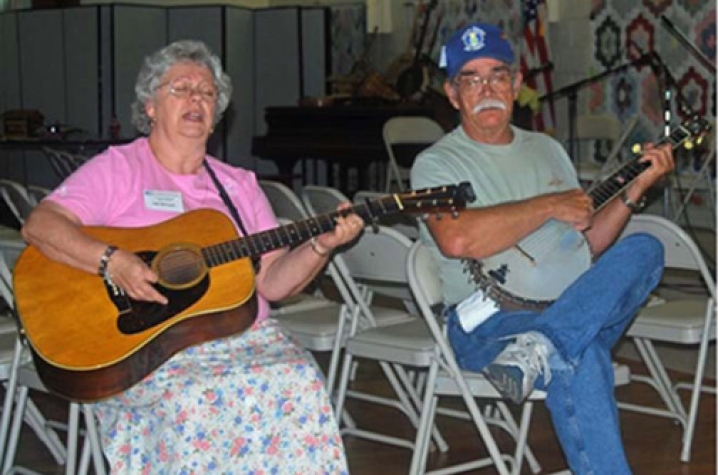 LEXINGTON, Ky. (Oct. 27, 2010) − The traditional sounds of Appalachia are sure to attract a large crowd to see Ada and Jimmy McCown at the next "Appalachia in the Bluegrass" concert. The Ada and Jimmy McCown free public concert is scheduled for noon Friday, Oct. 29, in the Niles Gallery, located in the University of Kentucky Lucille C. Little Fine Arts Library and Learning Center.

Jimmy grew up in a musical family on Pond Creek in Pike County, Ky. In the late 1940s, Pike County was filled with accomplished banjo players, many of whom played a rhythmic old time clawhammer style. Jimmy was inspired by the surrounding banjo players, but his main influence was his grandfather Boyd, who taught him how to play.

Years later after serving in the U.S. Air Force, Jimmy went on to master the three-finger bluegrass banjo style. To develop his own sound, Jimmy explored unique methods within the clawhammer style, methods he recalled from his grandfather and learned from other old time banjo legends.

"I also play fiddle, and I could never accept the fact that the banjo had to be a 'back up' instrument," said the multi-instrumentalist. "So, I began trying to play the melody to the songs and realized this wasn't possible without dropping my thumb into the scale." Jimmy had become identified with this style of melodic drop-thumb playing, that his grandfather called "double note" banjo. In 1977, Jimmy decided to add an extra string to make his banjo a six-string banjo.

After marrying Ada, Jimmy taught her how to play guitar. From 1968 to 2003, the couple had their own Bluegrass band that recorded six albums and toured the U.S. and Canada.

"During that time," Jimmy says, "I never lost sight of the mountain music of my childhood."

Ada and Jimmy have been inspirations and teachers to many aspiring string players. Jimmy has been on the faculty of Banjo Camp North. Additionally, he and Ada have taught at the Cowan Creek Mountain Music School, in Whitesburg, Ky., and the Hindman Settlement School, in Hindman, Ky.

The McCowns have been featured at several festivals, including the Appalshop Banjo Days; the Carter Family Fold in Hiltons, Va.; the Kentucky Folk Life Festival; and the Old Songs Festival in Albany, N.Y. While in New York they shared the stage with Jane Rothfield and played house concerts.

To listen to a sample of Ada and Jimmy McCown performing, visit YouTube at www.youtube.com/watch?v=LXhNi-mFwuY.

The annual "Appalachia in the Bluegrass" concert series, presented by UK's John Jacob Niles Center for American Music, explores and celebrates traditional music of the Appalachian region. A variety of traditional Appalachia music has been represented through the past few years; from old time sounds of a mountain banjo player to blues-infused styles of music. The Niles Center is a collaborative research and performance center of the UK College of Fine Arts, UK School of Music, and UK Libraries.

This year's concert series is also sponsored by the Office of the Provost and the Appalachian Studies Program.

For more information on the Ada and Jimmy McCown concert or the "Appalachia in the Bluegrass" concert series, contact Ron Pen, director of the Niles Center by e-mail to Ron.Pen@uky.edu or visit online at www.uky.edu/FineArts/Music/Niles.