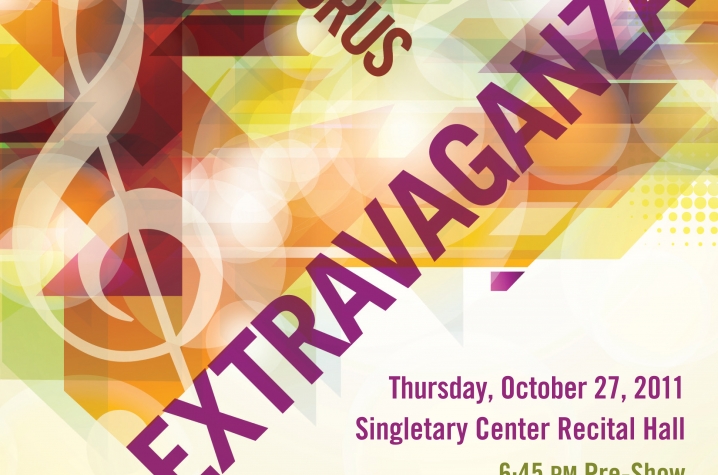 LEXINGTON, Ky. (Oct. 26, 2011) - The University of Kentucky Men's Chorus and Women's Choir are preparted to kick off their concert seasons showcasing the university's vast vocal talents. The men are up first up this week with the fifth annual Men's Chorus Fall Extravaganza scheduled for 7:30 p.m. Thursday, Oct. 27. UK Women's Choir will take the stage the following week at 7:30 p.m. Friday, Nov. 4. Both concerts will be presented at the Singletary Center for the Arts   Recital Hall.

The Men's Chorus Fall Extravaganza has become one of the most popular concerts at UK in its short history. The event will feature the nationally renowned 80-voice UK Men's Chorus, as well as UK's popular a cappella group the acoUstiKats and the RedShirts from Western Kentucky University.

Not only will the Men's Chorus Fall Extravaganza feature college talents, but two high school a cappella groups will treat crowds to a pre-concert show at 6:45 p.m. The pre-concert performance will feature the Rainmen from Trinity Christian Academy and Great Scott from Scott County High School.

UK Men's Chorus, directed by Jefferson Johnson, has been making national news as one of the elite college choirs in the nation. In the last four years, they have been selected to perform at national conventions such as the Music Educators National Conference (MENC) in Salt Lake City; the National Collegiate Choral Organization (NCCO) in San Antonio; the Intercollegiate Male Choruses (IMC) in Oxford, Ohio; and, most recently, the American Choral Directors Association (ACDA) National Convention in Chicago, the college choir equivalent of playing in a Final Four.

Following the Extravaganza, the talents of UK Women's Choir take center stage. Lori Hetzel, conductor of the UK Women's Choir, has been selecting a variety of choral pieces that will challenge the women for the opening concert of the season.

"As women, we never can take the back seat in life and by challenging the women in the classroom they will be able to apply this same principle to all the areas of their lives," says Hetzel.

Featured at the concert will be solos by undergraduate vocal performance majors. Hetzel sees it as a way of showcasing the talent of the upperclassmen before they graduate. Additionally, a selection from the choir's third international tour to England, Ireland and Wales will also be incorporated into the concert.

Along with the performance, the UK Women's Choir is excited to launch a clothing drive at the fall concert to collect women's clothing for the Bluegrass Domestic Violence Program. Audience members are encouraged to bring women's clothing to the concert, which will be donated to the organization.

The UK Women's Choir fall concert will also include a pre-show performance by UK's female a cappella group Paws and Listen at 7:10 p.m.

Tickets for the Men's Chorus Fall Extravaganza and the UK Women's Choir concert are $10 for general admission and $5 for students and children. To purchase tickets to either concert, contact the Singletary Center ticket office by phone at (859) 257-4929, online at www.singletarytickets.com, or in person at the venue.

UK Men's Chorus and UK Women's Choir are part of the UK School of Music in the UK College of Fine Arts  . The School of Music has garnered national recognition for high-caliber education in opera, choral and instrumental music performance, as well as music education, composition, theory and music history.