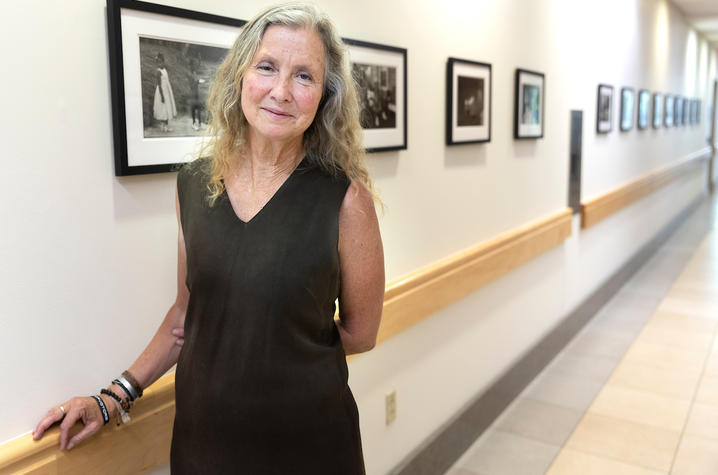 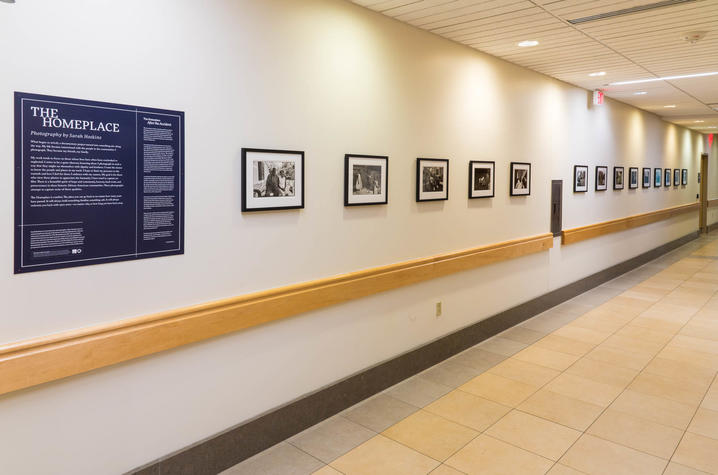 LEXINGTON, Ky. (Aug. 4, 2021) ­— When photographer Sarah Hoskins was contacted by Jason Akhtarekhavari, the manager of Arts in HealthCare for UK HealthCare, about exhibiting her photographs in one of the hospital galleries, neither of them knew it was a stunning coincidence.

Hoskins is a renowned photographer whose works have appeared in National Geographic Traveler, Politico and The Wall Street Journal and are in the permanent collections of institutions such as the Smithsonian Institute and The Center for Photography at Woodstock. Her series titled “The Homeplace” is an ongoing project — a series of photographs of people in historic African American communities in the Bluegrass region.

Akhtarekhavari learned about this series and contacted Hoskins about exhibiting the series in one of the hospital galleries. What he couldn’t have known was the Illinois native had been a patient at UK nine years earlier.

“Jason called me and said, ‘I found your work online,’” Hoskins said. “It’s funny because it just seemed strange because he’s here, the work is here, and I was treated here. It was just this really strange personal connection.”

“The Homeplace” started as a documentary series of the African American settlements that sprang up in the decade after the Civil War. These villages, or hamlets, as they have come to be known, were originally inhabited by freed slaves who were needed to work on the area farms in and around the Lexington area. Today, many of the residents are descendants of the freed men and women who founded them. In some cases as many as seven generations of a family have lived in succession on a “homeplace.”

In documenting these families and communities, Hoskins grew close to the people she met and photographed.

“What began as strictly a documentary project turned into something else along the way,” said Hoskins. “My life became intertwined with the people in the communities I photograph. They became my friends, my family.”

And her family showed up when she needed them most.

In 2012, Hoskins and her daughter where driving to Tuskegee University where she was to deliver a lecture about her work photographing Rosenwald schools — schools built in the early 20th century for the education of African American children. They planned to stop on the way and photograph one such school in Tennessee. It was raining, Hoskins recalls. She went to make a right hand turn when their car was struck by driver going 70 miles per hour.

They were transported to a nearby hospital, but Hoskins felt intuitively that something was wrong. She immediately called friends who drove two hours from Georgetown to pick up Hoskins’ daughter and their belongings as Hoskins was flown via helicopter to Albert B. Chandler Hospital in Lexington on the University of Kentucky campus. Another friend, Derek, met her there so she wouldn’t be alone.

Hoskins later wrote about the experience. “I am being wheeled through the emergency room of UK hospital in Lexington, Kentucky. I am brought into yet another emergency room. I can still only look up. I see the eyes that are Derek’s, the same eyes his daddy had. He strokes my hair that is matted and covered in dried blood. His warm coal colored hand holds my cold pasty white one. The nurse says, 'Only relatives are allowed in here, how are you two related?' I hear the smile in Derek’s voice. 'It’s a long story.'”

When Hoskins was approached by Akhtarekhavari to display her series in the Chapel Gallery in Chandler Hospital, she felt it was meant to be.

“I have a personal connection to this hospital,” she said. “I mean, my life was saved here. The people in these photographs, they all came here and took care of me and my family.”

The mission of the Arts in HealthCare program is to create an environment of care and to focus on the spiritual, emotional and physical well-being of UK's patients, family, caregivers and staff. The program recognizes the arts and the artists as powerful and positive forces in the healing process.

“I like the idea of an exhibit in a health care facility, because I like to get my work out to everyone,” said Hoskins. “Because not everyone goes to museums. I like the idea of people walking by and seeing my work that way.”

From the day he took over management of the Arts in HealthCare program in 2018, Akhtarekhavari knew he wanted to make a concerted effort to expand efforts around diversity, equity and inclusion.

"The arts can be a powerful bridge that connects people in a diverse, equitable and inclusive way," Akhtarekhavari said. "As a member of UK HealthCare’s Diversity, Equity and Inclusion Council and a member of UK’s central campus DEI Workgroup, I am constantly reminded of the ways in which the arts can help to not only heal the body and mind, but how the arts can also serve as an avenue for healing the long-festering wounds of our society, institutions, cities and our nation.”

As an example of this, Akhtarekhavari points to a recent exhibit by African American photographer Ellie Lee Weems, which shares a commonality with the new Hoskins exhibit.

"(Weems' work) featured beautiful portraits that captured a sense of time and place for a particular African American community in midcentury Florida," he said. "This new exhibit by Sarah Hoskins follows in the footsteps of Mr. Weems, but explores the African American community in Central Kentucky from a unique perspective and in more recent time.”

The exhibit is located on the first floor of the Chandler Hospital atrium, outside the chapel and will be on display through October. Hoskins, who now lives nearby in Louisville, hopes, in spite of COVID restrictions still in place, that people from the community can come and see themselves on display and feel pride for their families and their homes. And for those experiencing the work for the first time, Hoskins knows there’s something for them as well.

“'The Homeplace' is comfort,” she said. “The place you can go back to no matter how many years have passed. It will always hold something familiar, something safe. It will always welcome you back with open arms — no matter why, or how long you have been away.”