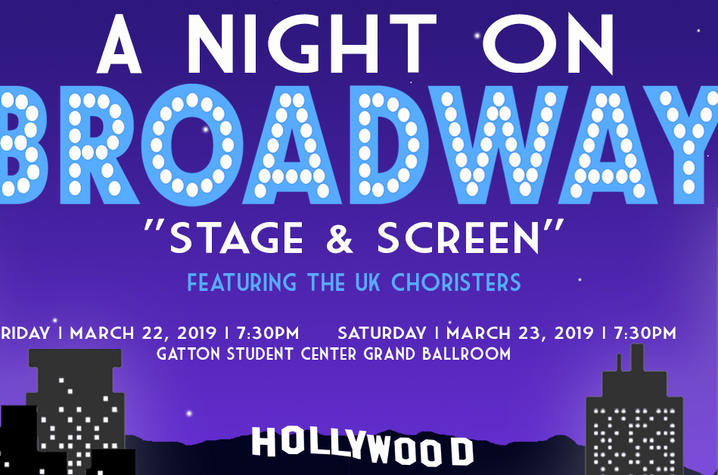 Tickets are now on sale for UK Choristers' "A Night on Broadway" concerts March 22-23, at the Gatton Student Center.

LEXINGTON, Ky. (Feb. 15, 2019) — The University of Kentucky Choristers will once again enchant audiences with their annual performance of “A Night on Broadway” March 22-23, at the Gatton Student Center Ballroom. Tickets are on sale now for the popular campus concert.

With this year’s theme of “Stage & Screen,” this family friendly event will feature musical theatre tunes that have made the transition from the stage to the cinema screen including songs from old Hollywood classics like “West Side Story” and newer productions like “La La Land.” The show will feature soloists, small ensembles and full company numbers that showcase the full-breadth of talent within the UK Choristers.

After a few years at Singletary Center for the Arts, “A Night on Broadway” will return this spring to UK’s newly renovated Gatton Student Center on Avenue of Champions. Audiences will be treated to an amazing concert with a little movie magic mixed in at a brand-new venue.

The oldest performing organization on campus, the UK Choristers represents a wide variety of majors. The 80-voice mixed choir of underclassmen specializes in choral repertoire of all periods and styles, both a cappella and accompanied. In addition to its own concerts, the ensemble performs a major work each year with the UK Symphony Orchestra and has also been featured with the Lexington Philharmonic Orchestra in the “Unplugged and Untied” Concert Series. Choristers performs regularly on and off campus as well as tours frequently throughout the region.

The UK Choristers perform under the direction of Elizabeth Wilson, adjunct professor of choral music, who, in addition to serving as the primary conductor for the ensemble, also teaches courses in vocal music methods and conducting, supervises student teachers, and acts as one of the faculty advisors for the a cappella group Paws and Listen. Prior to coming to UK, Wilson was director of the women’s choir and a voice instructor at Georgia Institute of Technology after serving as choral director for both Pope and Wheeler High Schools in Cobb County, Georgia. She earned a bachelor’s degree in music education from the University of Georgia and a master’s degree in choral conducting from Georgia State University.

“A Night on Broadway” will be in the spotlight 7:30 p.m. Friday and Saturday, March 22 and 23, in the Gatton Student Center Ballroom. Tickets are $10 for students, $15 for staff and faculty, $25 for general admission, and $35 for a VIP package that includes parking. Tickets can be purchased from the UK Student Involvement Box Office and online at https://ukytickets.universitytickets.com.

UK Choristers is a part of the UK School of Music at the UK College of Fine Arts. The school, currently celebrating its 100th anniversary, has garnered a national reputation for high-caliber education in opera, choral and instrumental music performance, as well as music education, music therapy, composition, and theory and music history.