Fans of the Broadway juggernaut "Hamilton" will recognize those lyrics as the Tony Award-winning musical's depiction of America, as well as the show's protagonist. But those familiar with the story of University of Kentucky theatre graduate Patrick Garr might also find it an appropriate description of the up-and-coming actor/dancer now appearing as Samuel Seabury and Man 2 in the ensemble of the Angelica Tour of "Hamilton."

A native of Lexington, Garr found his passion for dance at a very young age watching Irish clogging on TV. To nurture that interest, and help her son learn proper techniques so he wouldn't hurt himself, Garr's mom put him in ballet-tap-jazz combo classes around the age of 3.

By third grade, Garr knew he wanted to dance more. He began competing and auditioned for Lexington's School for the Creative and Performing Arts, which he attended as a contemporary dance major from fourth grade through high school. At SCAPA, Garr took advantage of all the creative training opportunities, learning as many dance styles as he could, adding vocal and acting classes, and participating in and auditioning for plays.

But Garr didn't stop there. He sought out classes and performance opportunities around Lexington, attended the Governor's School for the Arts, and traveled to New York to train. While studying with a UK Opera Theatre young artists training program, Garr got the chance to travel to the Junior Theatre Festival. It was there that he not only took home male performer honors, but also made the decision to pursue the arts as his career choice, saying he realized then "I'm never happier than when I'm performing."

With the objective to make a career for himself in the arts, Garr weighed his college options and chose the university in his own backyard.

“I decided to go to UK after a lot of thought. I really found that I could craft the program to what I wanted it to be," the 2016 graduate said. "And the best thing I think about the program at UK is that you get so much concentration on a lot of different areas because you can do a dance minor, a vocal performance minor and get your BA in theatre and the musical theatre certificate."

Garr was able to continue expanding his skill set as one of the first students to pursue a musical theatre certificate at UK — a program of classes from the Department of Theatre and Dance and School of Music tailored for individuals wanting to pursue the field.

“Nancy (Jones), Lyndi (Franklin Smith) and Jeromy (Smith), all three of them, really pushed me to be a part of the musical theatre program, and it was phenomenal to be able to work with all of them and so many other professors and guest artists coming in.”

Garr moved through his coursework at UK quickly and decided to graduate a semester early when Susie Thiel, director of the Dance Program, told him it was time to take the next leap. The day after Christmas 2016, Garr — with the help of his family — moved 13 hours away to New York City.

In the Big Apple, he quickly realized the life of a working actor and dancer centers on auditioning. "Auditioning in New York is definitely its own profession in and of itself. The job is not getting the job, the job is auditioning, because you can get 100 auditions and 10 callbacks and get one yes from those 10 callbacks."

As Garr settled into the rhythm of auditioning, finding side jobs, and making friends who shared information on creative projects, he landed a job in fall 2017 dancing at Broadway Dance Lab (now Dance Lab New York) where choreographers create new work.

Then in February 2018, opportunity came knocking not once but three times. Garr booked "Jerome Robbins' Broadway" at the Muny, a couple of weeks later he booked "The Music Man" and the following week he got called in for "Prom," which has the same casting team as "Hamilton" and "Mean Girls." After that Garr was called in for "Mean Girls" to audition for the vacation swing. After two auditions, Garr got the call he was waiting for while walking down the street — he'd debut on Broadway in "Mean Girls."

"That (first) bow I will never forget — standing on the stage in the August Wilson Theatre on 52nd Street looking out. I will always remember I sat all the way house right, stage left to see 'Groundhog Day' there the year before with my manager and my parents, and then I was performing to that exact house for my Broadway debut."

Six months later, Garr received another life-changing phone call. This time it was the hottest musical tour in the world.

“Getting that call to be on 'Hamilton' was thrilling. I was in complete disbelief ... I asked when I was leaving, and she told me they wanted me there in four days. I was like, 'Oh gosh, okay this is happening. It’s real.'”

A musical on the life of founding father Alexander Hamilton with music, lyrics and book by Lin-Manuel Miranda, "Hamilton" won 11 Tony Awards, including best musical in 2016. It continues to dominate the world of musical theatre, with productions on Broadway, in San Francisco, Chicago and London, as well as two tours running across the U.S.

Garr joined the "Hamilton" Angelica Tour in Cincinnati, where he began six weeks of rehearsals. His first appearance as Man 2 and Samuel Seabury, which includes a dueling duet opposite Hamilton, followed on April 9, in Detroit's Fisher Theatre. Garr rarely leaves the stage, appearing in 2 hours and 45 minutes of the 3-hour show.

Just last Tuesday, Garr returned to Kentucky with the tour as it began its three-week residence at The Kentucky Center for the Arts in Louisville — a bonus part of his new gig.

"Being in my home state is absolutely incredible, especially getting to share this show with them. It was the best moment ever. Stepping on the stage opening night was like feeling my debut all over again."

And Garr hopes any aspiring UK actors and dancers in the audience take his cue to pursue their dreams in the arts.

"Never limit yourself because your limits are limitless at the end of the day. You can do anything that you put your mind to, and you have all of the resources at UK to do that." 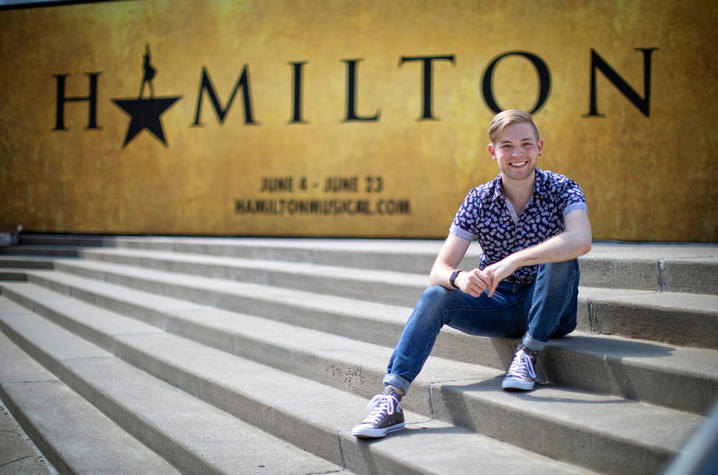 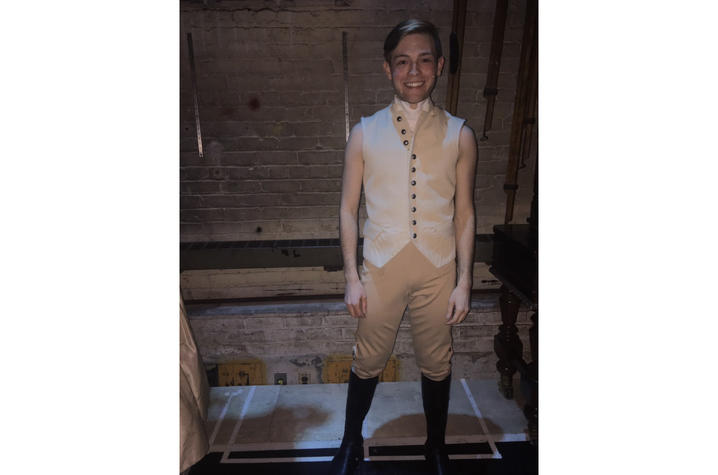 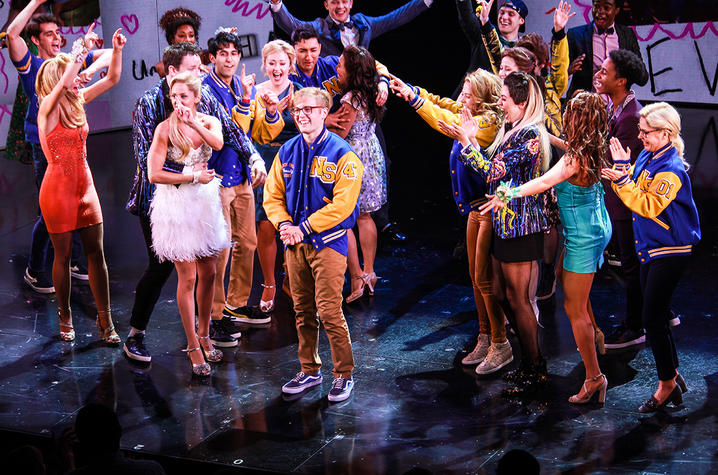 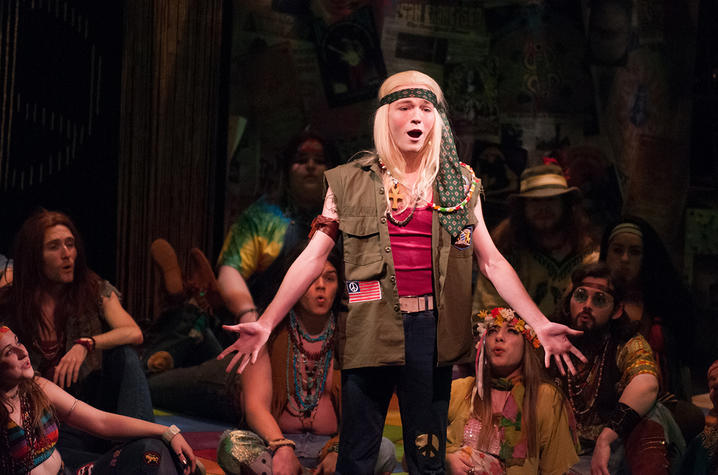 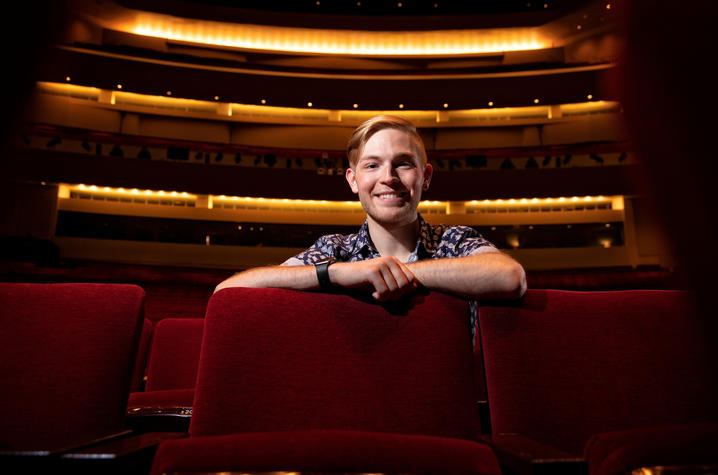