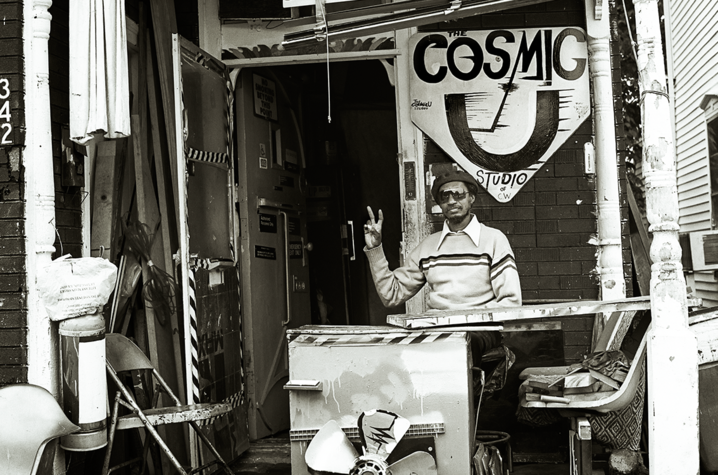 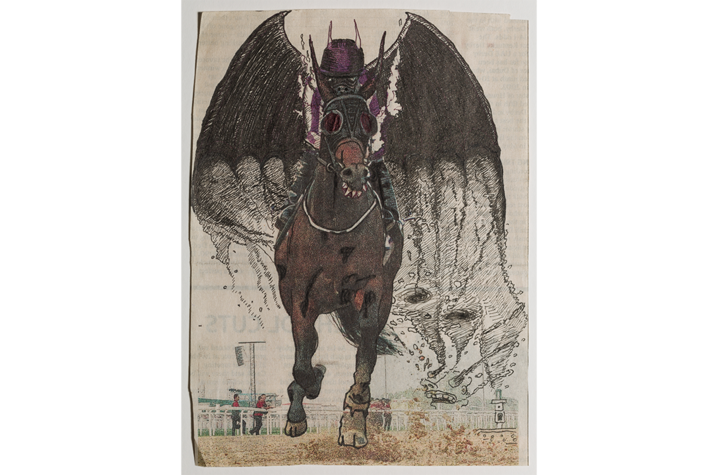 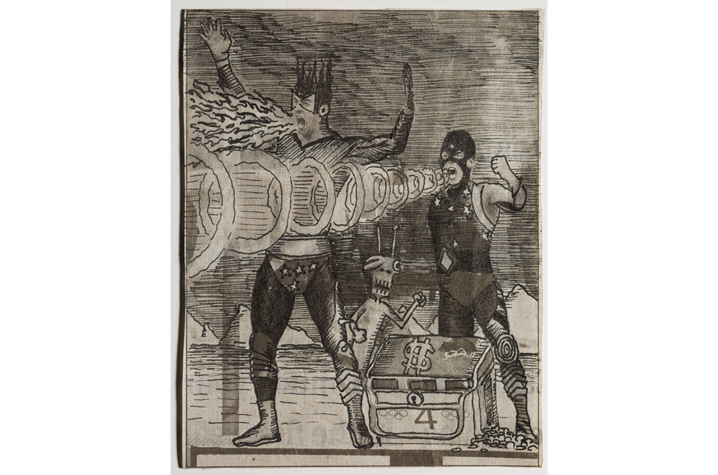 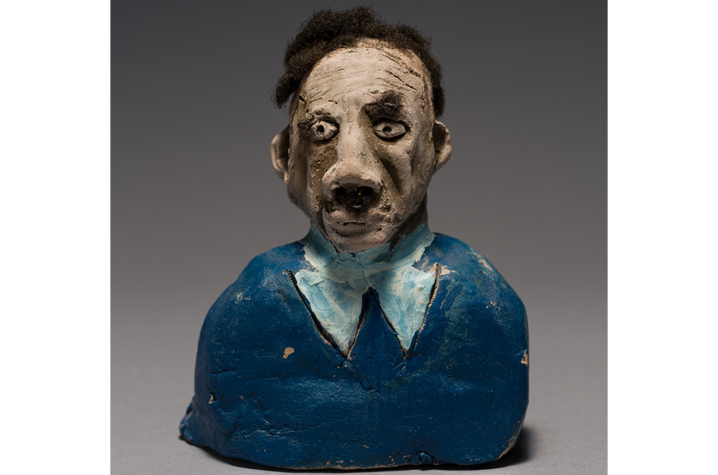 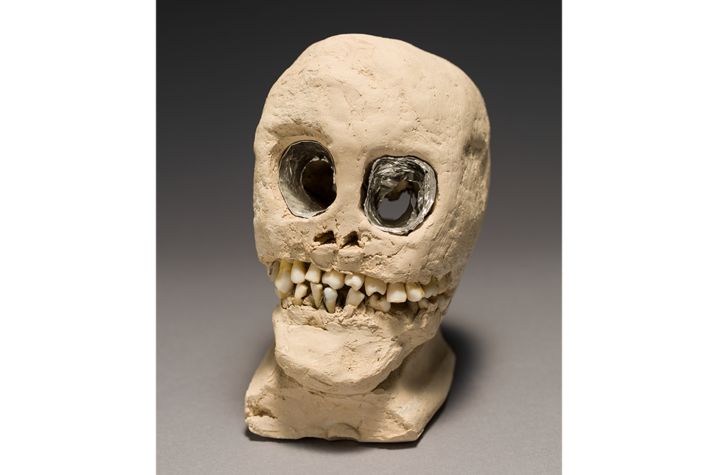 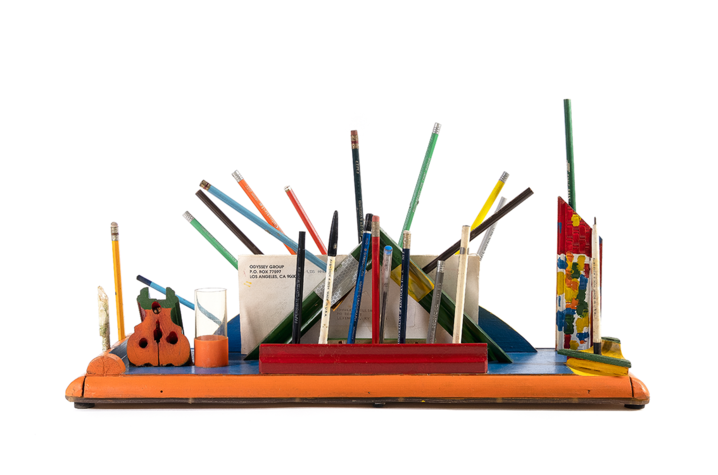 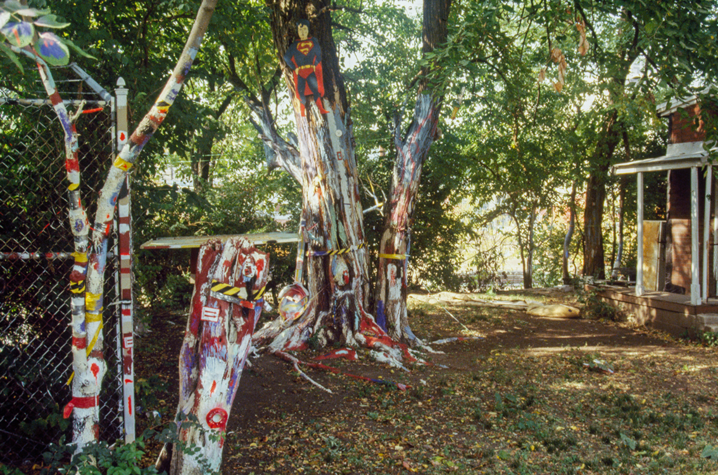 Both exhibits will run through Nov. 26, and are free and open to the public.

“The museum thrives on connecting powerful art and curious audiences, and telling stories about how creativity operates,” said Stuart Horodner, director of the UK Art Museum. “With Charles Williams, James ‘Son Ford’ Thomas and David Farris, we have three largely self-taught artists who transform common materials (tree stumps, discarded plastic, clay, hair, and newspaper photographs) into visions of transcendence, power and empathy. Williams was a Lexington resident whose work did not garner much attention during his lifetime, but his comics and assemblages are beginning to be appreciated by the artworld. Thomas was a legendary Blues musician whose figurative sculptures have been celebrated in recent years; and Farris is a Kentucky musician whose drawings have never been exhibited before.”

Read more about each exhibition below.

"The Life and Death of Charles Williams"

This exhibit will represent both a homecoming and celebration of the late Charles Williams (1942-1998), a Kentucky-born artist who created paintings, sculptures and drawings inspired by superhero and space travel comics from his youth.

Born in Blue Diamond, Kentucky, near Hazard, Williams taught himself to draw by copying comic book figures like Superman, Dick Tracy and Captain Marvel. In the early 1960s, he enrolled at the Breckinridge Job Corps Center in Morganfield to learn practical job skills. Williams seems to have thrived in the program where he honed his writing proficiency, made photographs and even developed his first regular comic strip, titled “J.C. of the Job Corps”, which appeared weekly on the back page of the Breckinridge Bugle — the camp newspaper.

While working as a full-time janitor at the IBM Corporation in Lexington, Williams continued to develop his artistic practice. He created comic narratives including the “Amazing Spectacular Captain Soul Superstar,” a caped superhero who fights against the perpetrators of the intergalactic slave trade, and an entire miniseries called “The Cosmic Giggles” which recounts the experiences of aliens visiting Earth and observing racism, disease, economic inequality and other problems specific to our planet.

He maintained an elaborate yard show, painting the trees around his house and embellishing them with cutouts of Mighty Mouse, Batman and others. He also made hundreds of pencil holders — sculptures of all sizes and forms — with holes drilled to accommodate all sorts of writing instruments, mostly gleaned from the desk drawers of IBM employees after they had gone home for the day.

Williams worked avidly until his untimely death in 1998, the result of AIDS-related complications and starvation. A few months later, an organization called Moveable Feast Lexington was founded in his memory and tasked itself with providing hot meals to people living with HIV/AIDS in the region.

The exhibition is curated by Phillip March Jones, artist, writer and curator based in New York City. Jones is the founder of Institute 193, a nonprofit contemporary art space and publisher in Lexington. He served as the inaugural director of the Souls Grown Deep Foundation in Atlanta, and in October 2020 he founded MARCH, a curatorial platform and gallery in NYC.

“Charles Williams’ work has always felt essential to me,” Jones said. “In life, his talent was fully realized but never shown in breadth — until now. As for my role, the exhibition is not so much curated but salvaged from the dustbin of history, a gracious display of what little remains.”

“The Life and Death of Charles Williams” will feature over 100 objects made by Williams between the early 1960s to 1998. It has been presented previously at the Atlanta Contemporary Art Center in Georgia, and Intuit: The Center for Intuitive and Outsider Art, in Chicago. This exhibition at the UK Art Museum is sponsored by VisitLex.

Learn more about Williams in this episode of KET’s “Kentucky Life.”

This exhibition will bring together two accomplished musicians whose unique visual art focuses on the human body and utilizes everyday items in surprising ways.

James “Son Ford” Thomas (1926-1993) grew up in Mississippi and learned to play blues guitar by listening to the radio. His job as a gravedigger had a profound effect on his clay sculptures of animals, portrait busts and skulls, often adorned with teeth, hair, beads and foil. He claimed to rely on dreams to inspire his songs and precisely sculpted beings, and both are marked by qualities of melancholy and resignation.

David Farris is a Lexington-based drummer and member of several local bands including Italian Beaches, Candy & the Yams and Club Dub. He maintains an active drawing practice, altering newspaper images of sporting events with ink and filling notebooks with line drawings and animation sequences. He regularly posts short video sequences on Instagram that document his domestic experiments in percussion. He approaches aural and visual creation with a sense of mastery and restlessness, stating, “Once I’ve played a drum beat enough times for it to sound good and I can use it, or if I’ve drawn some images enough to use them, then it’s time to try something new.”

The combination of Thomas’ sculptures and Farris’ drawings recognizes that artists often have signature content that can be understood no matter what outlets of expression they use. “Mortal Coil” offers meditations on being and becoming, the abject and the everyday. The exhibit was made possible thanks to Linda and George Kurz for the loan of their “Son Ford” Thomas sculptures.

Later this summer, the UK Art Museum will open additional exhibitions, including “Louis Zoellar Bicket: Wrapped and Waxed,” “Marlene McCarty: Thicker than Water” and “RAUSCHENBERG: A Gift In Your Pocket: From the Collections of Friends in Honor of Bradley Jeffries.”

The UK Art Museum’s current hours are 10 a.m. to 5 p.m. Tuesday through Friday, and noon to 5 p.m. Saturday. The museum is closed Sundays and Mondays.

The mission of the UK Art Museum, part of the UK College of Fine Arts, is to promote the understanding and appreciation of art to enhance the quality of life for people of Kentucky through collecting, exhibiting, preserving and interpreting outstanding works of visual art from all cultures. Home to a collection of over 5,000 objects including American and Europe paintings, drawings, photographs, prints and sculpture, the Art Museum presents both special exhibitions and shows of work from its permanent collection.