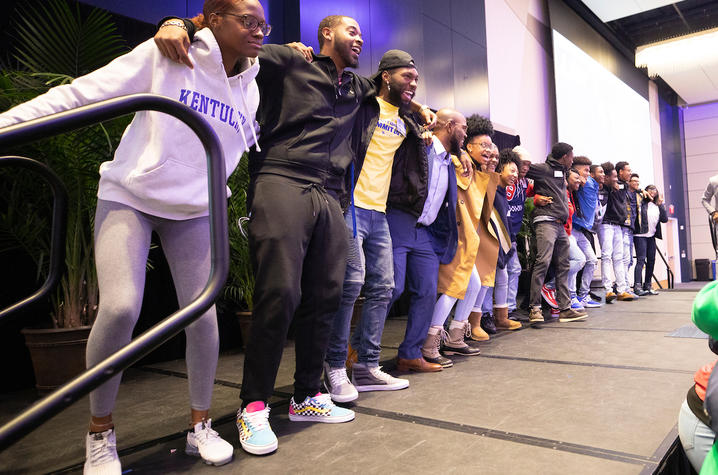 With every passing holiday season comes a multitude of mixed thoughts and emotions: tranquility for some, excitement for others, and maybe even grief or loneliness. Although not tangible, each response to the season is real and valid; and while fleeting, they are intrinsic reminders of the humanity we all bring to the table.

In the last year, we’ve reached milestones that would not have been possible without the support of several units across campus: dining, event planning, campus IT, and more. Their work extends far beyond our larger events and activities, but permeates our daily experiences as members of this community.

This year, we’ve commemorated the 70th anniversary of integration on UK’s campus. Lyman T. Johnson, the first African American student who, through legal means, gained admission to UK, paved the way for other minoritized students to be admitted. Mr. Johnson’s tenacity showed us that the journey—our journey—toward a more diverse, more inclusive environment, is possible.

The Campus Pride Index, a national benchmarking tool for colleges and universities that self-assesses LGBTQ*-friendly policies, programs, and practices, named us a top 25 campus for LGBTQ* safety and inclusion. And, we received five out of five stars for overall campus climate.

UK was also named among the Best Employers for Diversity in the country, according to Forbes magazine—ranking 41st on the list and the only Southeastern Conference school to be included.

From hosting Trevor Noah of “The Daily Show” in honor of our 70th year of integration, to celebrating Diwali and Navratri with UK’s Indian Student Association, to recognizing Trans Week with a series of reflective, informative, and celebratory events – we are continuing to recognize the importance of weaving inclusivity into the fabric of our University.

And for that, I thank each and every one of you.

I hope your break is one that provides rest and comfort, knowing that you have a second home waiting for you when you return.

And to our December graduates, congratulations on a job well done. I trust that you will take your education and use it to transform lives and communities everywhere – the same way you’ve transformed mine.