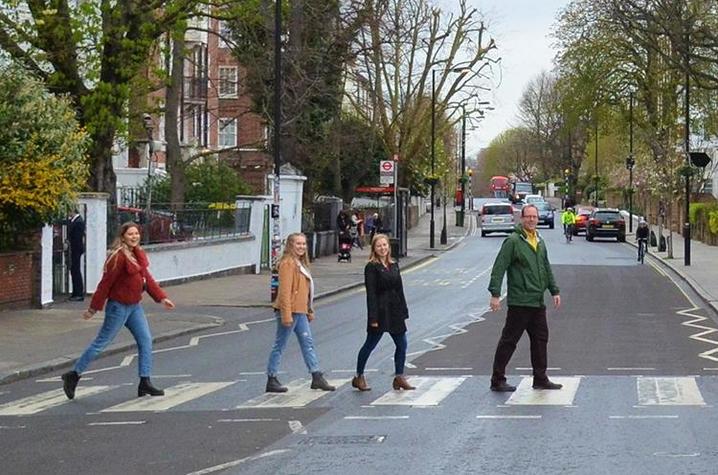 LEXINGTON, Ky. (June 4, 2021) — An international travel series featuring a professor and three students from the University of Kentucky College of Agriculture, Food and Environment will air beginning 2:30 p.m. EDT Sunday, June 6, on KET, with new episodes airing at the same time each of the following two Sundays.

“Traveling abroad really made me appreciate everything that UK had to offer,” said Rosenzweig, a Long Island, New York, native who has since graduated from UK. “I got more involved on campus after I returned from London. I don’t think college would have been the same for me, if I had not studied abroad.”

This is Swanson’s second season of the travel show. In the first season, he and a group of 10 UK students explored areas of Western Kentucky. Albright was also in the cast of the first season.

While in London, Swanson taught the students how to record and reflect on their travel experience. Students submitted weekly videos as part of the class. They also practiced interviewing each other about their feelings and experiences. While in London, the students had the opportunity to take additional classes at Arcadia University’s London Center.

“The student-produced videos add a lot of rich content to the series,” Swanson said. “Since they were in London for the whole semester, they had a lot more time and freedom to explore on their own compared to the first series where the students only stayed in the area for a week.”

Brian Volland, UK agricultural communications videographer, shot footage of the group on location in London, provided video editing and was the co-executive producer.

“It was a rewarding experience to work with such an enthusiastic and motivated group of students,” he said. “I appreciated the access they granted us into their adventures and their willingness to discuss how the opportunity changed and benefited their lives.”

Students visited many locations in London that are not typical tourist destinations but have a special meaning or interest to them. For example, as merchandising, apparel and textiles majors, Albright and Archambeau toured some of the European fashion hot spots. While the group was based in London, the students took side trips to numerous countries in Europe. Some of these trips are featured in the series.

For Rosenzweig, who was a hospitality management and tourism major, it was an opportunity to sharpen her travel skills and connect with her family’s heritage and history. She toured Paris, where her grandfather was raised, and other places in Europe that resonated with her Jewish roots.

She was also accompanied by family through some of her journey, and viewers will get to see those family dynamics. Her sister, Clara Rosenzweig, who is also a student in the UK Department of Retailing and Tourism Management, visited her during Spring Break, and they toured France together. Her parents and two brothers visited her in London on another occasion.

“It was a really big deal for my family to come visit me while I was in London, because my family doesn’t travel,” Rosenzweig said. “It was so special to be able to share the place I had fallen in love with.”

Doug High was a co-executive producer and director on the first season and served as a consulting producer on the second series.

“The transformative power of travel is still on full display in these students, and their unique perspective and demographic lens really makes this not-your-dad's travel show," High said. “What we hope to illustrate more than anything else, is to see the evolution in these young people through the power of travel, as they explore and spotlight venues off the beaten path and, ultimately, grow from the experience. It's rewarding television.”

Swanson plans to do more travel shows featuring UK students in the future and is in the planning phases of another season based in Kentucky.