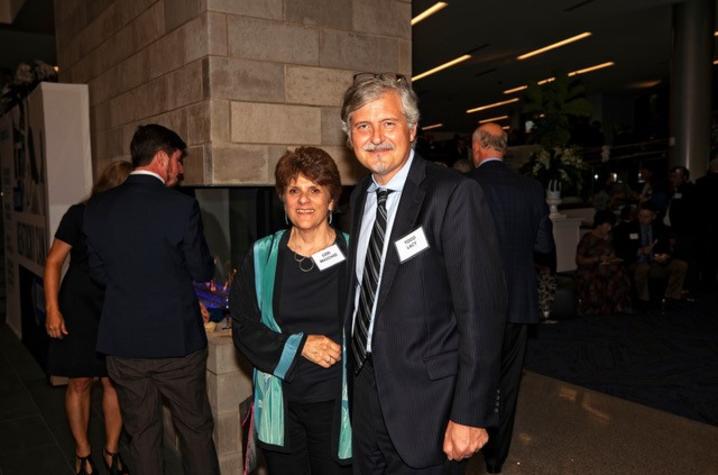 LEXINGTON, Ky. (Nov. 20, 2019) — When Todd Lacy was a student at the University of Kentucky in the 1980s, he was an English major planning to go to law school. That is, until his English class attended a Shakespeare play presented by the Theatre Department in UK's College of Fine Arts. The underlying theme of "As You Like It" was love at first sight, and as he watched the story unfold on stage, Lacy fell in love with all things theatre, and his journey at UK began to change course.

His passion for theatre has taken him around the globe working on some of the most major theatrical productions of all time, and now, he is supporting the college that launched his dream career. He gives annually to the Department of Theatre and Dance to be used for student productions.

"UK is a special place. I feel an obligation, a duty and an honor to give to the institution that laid the foundation of what I've become today," Lacy said. "I love the idea that I am helping them make theatre. I spent so much time in college collaborating with students to make great work, and it can sometimes be a struggle with limited resources.”

"When Todd shares his stories of early career challenges to recent successes with our students, he emphasizes the impact that his UK education had in preparing him to fully take on each opportunity,” said Mark Shanda, dean of the College of Fine Arts. “He is an outstanding example of what it means to be a Wildcat."

While working on his master's degree at UK, Lacy completely immersed himself in all facets of the theatre business. He spent long hours working with the theatre department, filling in wherever he was needed in many different capacities. He directed shows at Briggs Theatre as well as stage managed multiple productions and worked as a tech director on summer projects at the Guignol, all of which gave him a broad understanding of the needs and challenges of theatre.

Like many, Lacy's path didn't take him straight to his dream job. He had to climb the proverbial ladder, first opting to go to Washington, D.C. to look for opportunities. He scoured trade publications, sometimes working for no pay or managing productions on a paltry budget.

When he felt he was ready for bigger challenges, he moved to New York for employment opportunities and to make connections. He and two other UK theatre graduate friends produced their first show "off, off, off Broadway, way off Broadway" on a $5,000 budget.

"We put on this show downtown, and that's where I caught the producing bug because I realized, here we were putting together a team of people, hiring a director, hiring the creative team, hiring the actors, working on the marketing, the PR, the business side of the show and the box office revenue, and I fell in love with that,” Lacy said. “And that is when I decided to move away from stage management and directing to pursue a path in general management/producing.”

He landed a gig working for Broadway producer Cameron Mackintosh, first as an office manager and then in the general management office that oversaw all of Mackintosh's shows.

After that position, he became an assistant to Barbara Darwall, who was a general manager on the musical "Chicago."

“She became a real mentor to me,” Lacy said. “I learned a lot from her.”

Darwall eventually left to work for Disney Theatrical as an associate producer for the "Hunchback of Notre Dame," which was being produced in Germany. Disney had just launched "The Lion King" there as well, and Lacy followed Darwall to Disney to work as production manager on Darwall's team.

"I got to work with James Lapine, Alan Menken, Stephen Schwartz … names that I couldn't even believe I was around and working on productions that they were doing. It was incredibly exciting."

While at Disney Theatrical, Lacy worked his way up to associate producer for "The Lion King." He oversaw the launch of the United States tours and international productions in Australia, Netherlands, Shanghai and South Africa.

More opportunities opened up for Lacy when a former colleague at Disney, Michael Cassel, contacted him about an opportunity. Cassel is producer and CEO of the Michael Cassel Group, a live entertainment company that produces some of the world's greatest musical and theatrical productions in Australia, Asia and around the globe. When Lacy accepted a position as Cassel's head of production, he and his wife, Jennifer, and son, Jake, moved to Sydney, Australia.

The Michael Cassel Group is producing the worldwide touring production of Disney's "The Lion King." The show has played in Manila, Singapore, South Korea, Taipei, Bangkok and Hong Kong. They are also producing "Harry Potter and the Cursed Child," currently in Melbourne, and are in production for "Hamilton," which will open March 2021 in Sydney.

When Lacy reflects on his Shakespeare class at UK years ago, he said he never knew his love of theatre, film and music could ever be a career.

"I absolutely had an epiphany after seeing that play, like a light bulb went off and everything fell into place. My career choice is absolutely passion-driven," he said.

In the play "As You Like It," Shakespeare draws a metaphor that "All the world's a stage … and one man in his lifetime plays many parts." One might conclude that Lacy's life indeed has played out on a stage, and the many roles he's played while on his journey have taken him from passion-driven theatre student to a name synonymous with some of the greatest theatrical productions of all time all over the world.

To learn how you can support students and help the College of Fine Arts to continue to be a vibrant part of the community, contact Lisa Blackadar at 859-257-3145 or lisa.blackadar@uky.edu.

For more information about Kentucky Can, visit kentuckycan.uky.edu.