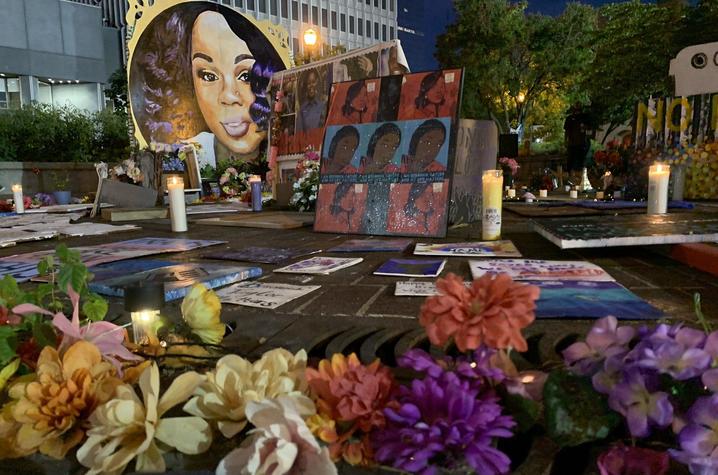 On the anniversary of Breonna Taylor's death, UK experts reflect on changes being made and those that remain to be addressed. Photo by Karyn Czar/WUKY.

LEXINGTON, Ky. (March 12, 2021) — Last year, on March 13, an unarmed Breonna Taylor — a former UK student — was shot and killed by police in her Louisville apartment. The killing was widely decried as unjustified and unconscionable.

Along with a series of killings of other unarmed Black people in other American cities in the spring and summer of 2020, Taylor’s death sparked a year of social unrest, deep questioning about the depths of systemic racism, and potential and actual policy reforms, designed to hasten change on campus, in the Commonwealth and across the country.

In Kentucky, for example, the state legislature is considering prohibiting some no-knock warrants; making considerable investments in Louisville’s west end, which has suffered from the corrosive effects of segregation and racism for decades; and forming a statewide commission that will examine issues of equity and equality.

UK, too, is examining its past and thinking about its future. Last summer, President Eli Capilouto announced the formation of a sprawling Diversity, Equity and Inclusion process — spanning nearly 20 projects and more than 500 people across campus, which you can read more about here: www.uky.edu/president/sites/www.uky.edu.president/files/2.19.21_-_a_progress_report_on_our_diversity_equity_and_inclusion_efforts.pdf.

“We are a place always motivated by a continual commitment to reflection and renewal,” he said. “We are willing to promote our progress. We also must be willing to just as readily confront and interrogate those times in our past and our present where our deeds did and do not match our words.”

In that spirit of reflection and renewal, UKNow asked subject matter experts across campus three basic questions as the campus and country mark the one-year anniversary of Taylor’s death:

Progress at UK, but still more to do

Anastasia Curwood, a history professor and inaugural director of UK’s Commonwealth Institute for Black Studies, said “that many white friends and colleagues have become much more aware of the fact that racism persists in our lives. They are beginning to understand that time alone is not the antidote to racism; active antiracism is necessary.”

More specifically, UK has “announced unprecedented initiatives to address issues of systemic racism,” ranging from a $10 million investment in a research alliance to address racial inequities to the formation of the Commonwealth Institute of Black Studies, said Rafael E. Perez-Figueroa and Kathryn Cardarelli, professors in the College of Public Health.

You can read more about each of those initiatives here:

At the same time, they said, UK reorganized its leadership and central administration to better reflect and focus on issues of diversity, equity and inclusion. You can read about that reorganization here: www.uky.edu/president/sites/www.uky.edu.president/files/8-31-2020_0.pdf.

Recently, a number of DEI projects have been given a greenlight, including moving forward with a comprehensive diversity master plan; creating an art fund in which 1% of all capital projects $1 million and above will be designated for diverse art; and the hiring of UK’s first supplier diversity manager.

The College of Public Health, as only one example of college and unit work across the campus, has organized a series of events to foster “an anti-racist academic environment (and) address the role of structural racism in tackling health inequities in the U.S.,” Perez-Figueroa and Cardarelli said.

It’s a recognition, they said, that “colleges and universities are uniquely positioned to address structural racism and to prepare the next generation of leaders to address these challenges.” At UK, the commitment to DEI “must be continuously assessed and the findings must be transparent. The whole university community must engage in ensuring those actions align with the creation of a more inclusive campus.”

But to some, change — to the extent it is occurring at UK and in Kentucky — is not happening quickly enough.

DaMaris Hill, an associate professor of creative writing, English and African American studies, said the university, the state and institutions such as government “have not engaged in a process of reconciliation with the broader community …”

“I am talking about the Black community and beyond the collective identity of people,” Hill said. “Around the world police brutality in the United States is viewed as a human rights violation. Black people were not protesting Breonna Taylor’s death in isolation. Many people of many ethnicities and races around the world recognized the injustice associated with her death.”

Hill believes a “reconciliation process should begin on campus and throughout the state.” And that requires “truth sharing” and “trust building” as part of that process. “Symbolic gestures, such as capital investments, are great ways to start, but these gestures can be viewed like wrapping a broken bone with gauze. More reflective and justice engaging work should be done.”

While still a persistent problem, racial economic inequality has been a point of some progress in the last several years, said Michael W. Clark, an associate professor of economics and director of the Center for Business and Economic Research in the Gatton College of Business and Economics.

The COVID-19 pandemic and resulting economic recession, however, stopped the progress, Clark said.

“Recessions having a disproportionate impact on minorities is not a new issue,” he said. “While the COVID recession was unusual, it simply magnified longstanding economic and social challenges. These challenges include significant racial differences in employment, income and wealth that contribute to greater economic insecurity for portions of our population.”

Long term, Clark said, as the country emerges from a recession, it will be critical to “develop policies that effectively address the systemic causes of racial gaps.” That will require a more complete understanding of “how factors such as discrimination, school access and criminal justice affect racial economic gaps that will help policymakers develop more effective programs to reduce these gaps.”

Numerous states across the country are examining police reforms, said Cortney Lollar, an associate professor in the Rosenberg College of Law who teaches and researches in the areas of criminal law, procedure and evidence.

By last October, she said, six states had passed laws banning or restricting chokeholds, and other areas were beginning to require the use of police body cameras during search warrants. And still other states and cities “have undertaken reforms related to the increased transparency of police disciplinary records and the purchase of military grade equipment for their police forces.”

Unfortunately, Lollar said, the momentum from last summer around criminal justice reform “seems to have waned over the winter months.” Cities such as Minneapolis and Seattle that were contemplating changes to police budgets have backed off.

Going forward, even more consideration needs to be given to rethinking what we ask police to do and how we pay for those initiatives, she said. Much of police work is actually concerned with calls that don’t relate to crime, such as mental health checks or addiction issues.

“A shifting of the duties we expect police to undertake would obviously involve the need to expand the infrastructure of social service agencies as well as to think more deeply about the best way to help those navigating issues of mental illness, addiction and poverty,” Lollar said.

Lollar added that more concrete proposals — such as banning chokeholds, prohibiting no-knock warrants, increased use of body cameras and using restorative justice alternatives — are important reforms that need to be implemented.

“Racism will continue to infect all aspects of our culture if we all … do not acknowledge the presence of racially different treatment in all areas of society,” Lollar said.