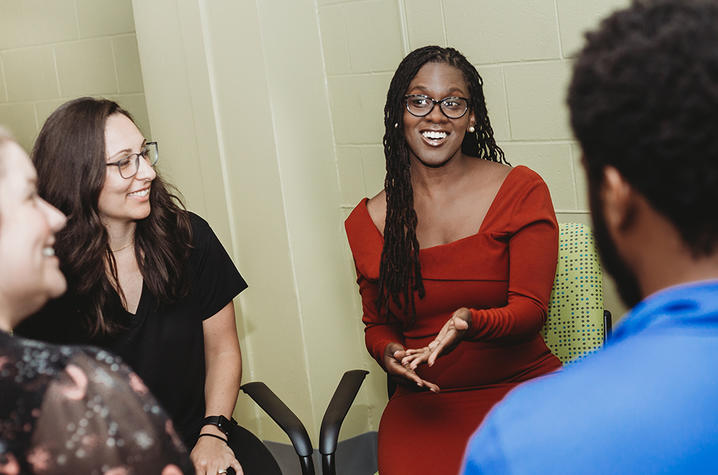 Anti-racist trainings are led by Candice Hargons, a professor in UK’s College of Education.

LEXINGTON, Ky. (Feb. 16, 2021) — The University of Kentucky is moving forward with its anti-racist trainings, rolling out additional training to the Board of Trustees, members of the Diversity, Equity and Inclusion (DEI) leadership team, workgroups, project leads and executive sponsors starting this week.

Led by Candice Hargons, a professor in UK’s College of Education, the training program is in response to a campuswide initiative to “change the culture” as a community united against systemic racism.

As anti-racism protests swept the nation in 2020, it is clear that returning to “business as usual” will not yield the results the American people are marching for. While the university has for many years implemented diversity trainings for its employees, the university acknowledged that more must be done.

So that we can begin to move the conversation from what it means to be non-racist to one that is focused on being actively anti-racist, new methods of teaching have been put in to place.

“This training weaves in encouragement, models of identity development and intentional care to help people sustainably work toward anti-racism,” Hargons said. “Most diversity and inclusion trainings avoid identifying, comprehensively defining and acknowledging the impact of systemic, interpersonal and internalized racism. Anti-racism training addresses fear and courage, how systemic racism has organized everything from neighborhoods to syllabi and it integrates intersectionality. Additionally, this training integrates psychological research to help participants understand their resistance to adopting an anti-racist mindset and how that has psychosomatic origins.”

The two-day training session was initially presented to senior administrators in August. Over the course of six hours, Hargons said administrators were engaged, willing to be transparent about the need to strengthen their anti-racist efforts and focused on creating implementation plans and next steps in terms of additional training on campus.

President Eli Capilouto, who was among the initial group to receive the anti-racist training, felt deeply impacted by what he had learned and encouraged that the training will help move the campus toward a more inclusive and equitable space for all.

“The anti-racist mindset workshops led by Dr. Candice Hargons are important opportunities for participants to learn more about how they can help ensure we are a community where all are accepted and afforded the same opportunities to succeed,” Capilouto said. “Dr. Hargons creates spaces that encourage open and honest conversations among colleagues. We are grateful for her invaluable expertise, and we appreciate the time and talent she has dedicated to this work.”

As the trainings continue with administrators and external stakeholders, Hargons hopes that the changes made on campus are quantifiable and a shift is made in the way diverse members of the campus community are viewed.

“I want the outcome of these trainings to be qualitative and measurable change in the way staff, students, administrators and faculty of the global majority (racially/ethnically marginalized people) are treated, respected, compensated, recruited and retained.”

While Hargons’ responsibility is to train those who have policy making positions, she notes that the university has amazing administrators, like George Wright and Nicole Martin, who are building out a process for the entire campus to receive similar training.

“No matter where you are in the area of race relations, or anti-bias behavior, Dr. Candice Hargons’ session is so informative, that you will learn that you still have things to unpack which initiates deeper growth,” said George Wright, interim vice president for institutional diversity and senior advisor to President Capilouto. “In my case, I have been a scholar on race relations in the historical and contemporary contexts for more than three decades, and I learned a great deal. It is important that everyone on campus receive this training in this type of environment, where one’s peers not only will learn from the person conducting the training but from each other.”

With the creation and expansion of the anti-racist training program, the university is moving in the right direction, however, the struggle for racial justice and equality is far from over. Last year’s protests led by Black Lives Matter supporters echoed the ongoing plight of the oppressed, similarly to those organized by Martin Luther King Jr. just decades ago. As we celebrate Black History Month, it is important to look at how far we have come, but equally as important to look at how far we still must go.

Serving as a steppingstone in our journey to become a community truly united against systemic racism, Hargons' training is just the beginning.

“Racial equity can't be achieved through a two-part training,” Hargons said. “The training is the catalyst for sustainable anti-racist action, and it provides key information on the process and necessary accountability structures to transform UK.”

The university in June announced a campuswide initiative around Diversity, Equity and Inclusion. UK community members are involved in several projects and initiatives — from increasing diverse faculty, student and staff pipelines to a more intentional diversity master plan around the physical campus. To learn more about this master plan, click here.