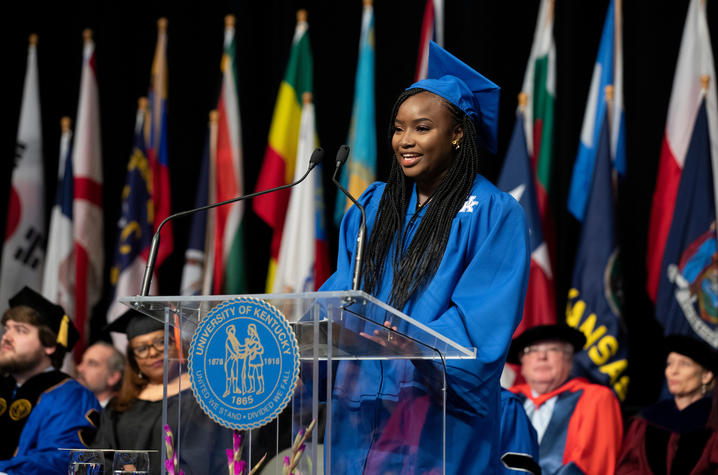 LEXINGTON, Ky. (March 3, 2020) — Following tradition, each of four University of Kentucky Commencement ceremonies in May will feature a selected student speaker to deliver a three- to five-minute address to the graduates in the Class of 2020. Applications for student speakers are being accepted now through Friday, March 27 at 5 p.m.

Students interested in applying must be receiving a degree from UK at one of the May Commencement ceremonies. Applicants must have contributed to the university through campus and community activities or through their chosen field of study. Additionally, candidates must show affirmation of public speaking ability and be willing to present their address to the Commencement Speaker Selection Committee. Interviews for finalists will be held April 1 and 2.

Application materials include a resume with detailed activities, work experience and accomplishments achieved during the applicant's study at UK. A summary of no more than three typed, double-spaced pages of the applicant's proposed speech and a completed online application are required.

Incomplete applications are unable to be considered by the selection committee. Documents are required to be submitted in PDF format with the applicant's first and last name.

Applications are available online at https://www.uky.edu/commencement/speaker.

UK Commencement ceremonies will be held at Rupp Arena.