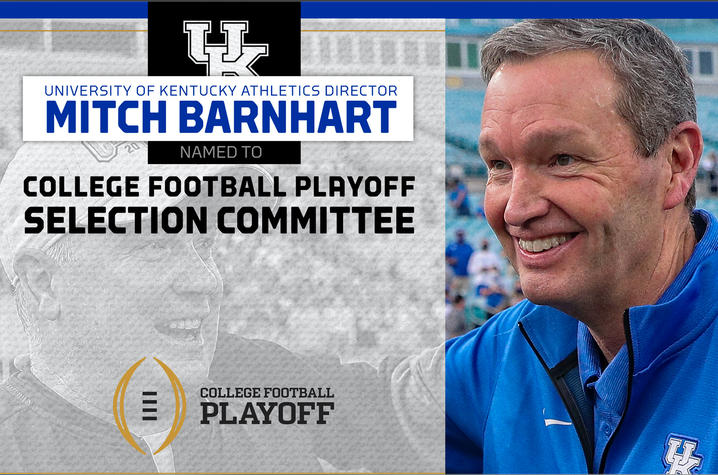 LEXINGTON, Ky. (Jan. 28, 2021) — University of Kentucky Director of Athletics Mitch Barnhart has been named to the College Football Playoff (CFP) Selection Committee for a three-year term, as announced Tuesday by Bill Hancock, executive director of the CFP.

“Mitch, Boo, Chris, Will and Joe will continue the integrity that has been the committee’s hallmark through our seven seasons,” Hancock said. “Their knowledge, experience and character, along with their love of the sport of college football, will make the transition seamless.”

The five new members will begin their terms in the spring. They replace Joe Castiglione, Ken Hatfield, Ronnie Lott, Todd Stansbury and Scott Stricklin, whose terms have expired.

In being named to the CFP Selection Committee, Barnhart adds to his leadership and impact in college athletics:

Barnhart has served on numerous other committees and boards for the NCAA and the National Association of College Directors of Athletics. Most notably he has worked on the NCAA Division I Council, been chair of the NCAA Competition Oversight Committee and was a member of the NCAA Division I Baseball Committee. He was an original member of the SEC Network Content Committee, which was integral to the launch of the largest new cable channel in television history.

In 2019, Barnhart was named Athletic Director of the Year by the Sports Business Journal. His legacy at UK includes helping develop administrators who have gone on to become athletics directors at nationally prominent universities, including Greg Byrne of Alabama, Mark Coyle at Minnesota, Rob Mullens at Oregon, Scott Stricklin at Florida, John Cohen at Mississippi State, Kevin Saal at Murray State and DeWayne Peevy at DePaul.