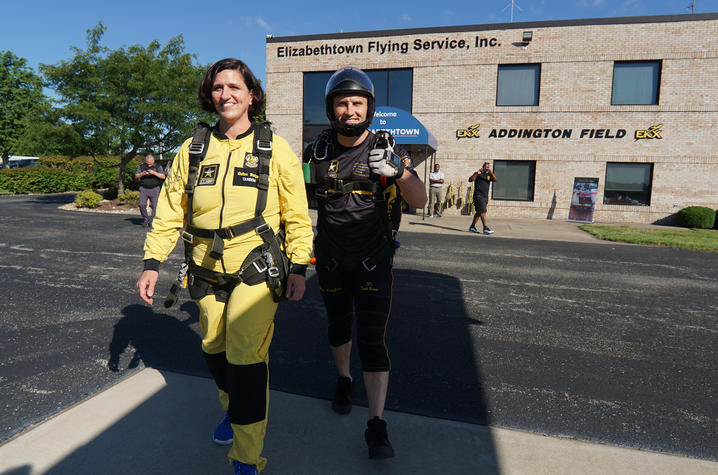 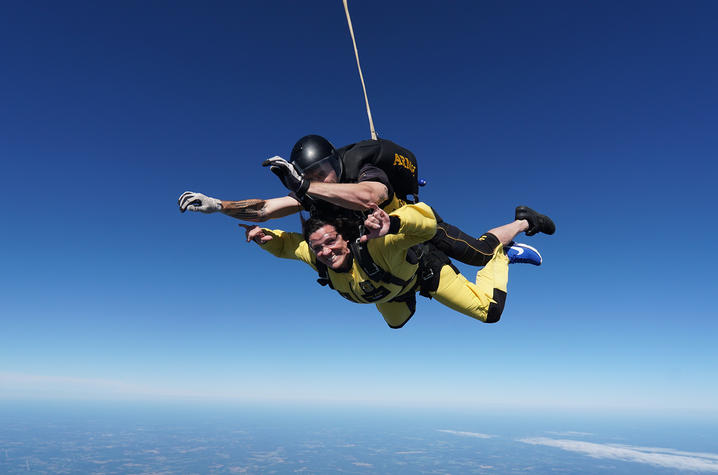 LEXINGTON, Ky. (Aug. 2, 2022) — When Beth Austin got the offer to jump out of an airplane, like any sane person, she was in disbelief.

“I honestly thought I was misreading the email,” Austin admitted.

Austin received the opportunity of a lifetime. She was selected to participate in the U.S. Army Golden Knights annual tandem jump and leap from a military aircraft at 13,500 feet.

After some deep breaths and a few more reads of the email, Austin was all in.

Just as Austin is all in as the new director of the Veterans Resource Center (VRC), housed in the Office for Student Success at UK.

The VRC provides support to UK's military and veteran population. Its goal is to ensure that their transition to college is as smooth as possible.

Appointed this spring, Austin brings a rich background in higher education and personal experience with the military to the position.

“Beth is a wonderful addition to the VRC staff,” Marianne Young, assistant vice president for Student Development and Support, said. “She brings a wealth of experience as a student advocate, career advisor and is a passionate champion of veteran student success on campus."

UKNow spoke with Austin to discuss her new role as director, her goals for the future of the resource center and, of course, her tandem jump.

UKNow: Can you tell me about your background and how your experiences brought you to this position?

Austin: I bring a combination of both personal life experience and professional career experience to my new position as the director of UK’s Veterans Resource Center. Marrying an active-duty service member and then immediately moving 5,000 miles from home as a pretty young woman was an eye-opening experience, to say the least. I quickly realized the military community has its own unique culture and challenges, and I wanted to be the best military spouse I could be. Throughout my 26-year career, I have worked in the areas of academic advising, career counseling, family resiliency and readiness and volunteer program management, all within the military community. At different times, I have been known to brief a group of 500 U.S. Navy sailors on the deck of a ship, deliver a command education plan to a commanding officer, manage a military children’s movie night, present a “military spouse 101”-type training and partner with military chaplains to present a marriage enhancement workshop. My goal has been to use my own experiences and professional training to support the military community.

UKNow: How do you plan to move the VRC forward as the new director?

Austin: My vision for UK’s Veterans Resource Center includes increasing our visibility in order to serve our students veterans and military-connected students more broadly. I am planning to implement some programming based on input I have received from our veteran population, such as personal finance and career development interests. We are expanding our promotional and marketing efforts by using channels such as Canvas and social media. I am carefully thinking about whom we are serving and why so we can meet our community where they are and meet their needs today. Additionally, I look forward to bringing Integrated Success Coaching for student veterans and military-connected students to the VRC starting this fall.

UKNow: What challenges do you think veterans face in the higher education space and how do you hope to support those students as the new director?

Austin: Veterans have varying motivations for going to college. Higher education is the very reason that some enlisted in the military, and so they are thrilled to start college after leaving the military. Others enroll in college because they have found there is a degree requirement in the civilian world for the job similar to what they did in the military. No matter what brings them to higher education, one of the most challenging things for veterans is navigating a system that is very different from what they are used to in the military. Whether the student veterans are 22 or 52, it is apparent that they are different from most of the other students around them. The college campus culture is very different from the military culture of structure, hierarchy and brotherhood/sisterhood.

As the new director of the VRC, it is my mission to support student veterans from their transition into UK, throughout their academic journey and their preparation for their next steps after graduation. With the network of campus and community partners, I will support student veterans and their families by ascertaining what they need for their success, and then connecting them to the appropriate resources.

UKNow: What would you tell a student veteran skeptical about getting involved with the VRC?

Austin: I would tell the skeptical student veteran that the Veterans Resource Center is a welcoming and friendly place to be. We have a great team of VA work study students who are student veterans or children of veterans, and we are all there to welcome and assist all student veterans.

UKNow: Is there anything else you would like the campus community to know about you or the VRC?

Austin: About me, I am very serious about my work, but I am someone who loves to have fun!

The Veterans Resource Center is a hidden gem in the first level of Erikson Hall. I want to expose that gem! I guarantee that there is at least one service we offer that would be a surprise to members of the UK community.

I invite all student veterans and military-connected students to grab a coffee, use our computer lab, get their questions answered, or just hang out in our lounge. We are planning some great programming and events for the upcoming academic year, so please stay tuned.

UKNow: Tell us more about the tandem jump with the Golden Knights Parachute Team! How did that come about, what was the experience like and what was the goal of the jump?

Austin: When I assumed my role as VRC director in March, I immediately started forming relationships with campus partners. One of my first contacts was Allen Back, UK Army ROTC recruiter operations officer. We had discussed some ways we can partner to support military-connected students. So, when I received an email regarding the tandem jump with the U.S. Army Golden Knights Parachute Team, I honestly thought I was misreading the email when I received the offer from Allen. I quickly went through the stages of disbelief, denial, anxiety and finally excitement.

I immediately understood what an amazing opportunity was being offered to me. Sure, there is skydiving, but a tandem jump with an elite military parachute team is next level.

My goal for the jump was primarily to overcome my fears and anxieties around flying. I have spent a large portion of my life being safe and careful. Following a milestone birthday at the beginning of this year, I decided to do things to challenge myself. I am so thankful that this tandem jump opportunity came along.

The experience was one of the most fun and exciting things I have ever done. And it was also terrifying! I have to say that the U.S. Army and Army ROTC took very good care of me throughout the entire process. I still can’t believe I completed a tandem jump, and it was such an honor to do so with the U.S. Army Golden Knights! I have been asked several times if I would do another tandem jump. Yes, just tell me when and where!

For more information on the VRC and the Office for Student Success, visit their website.