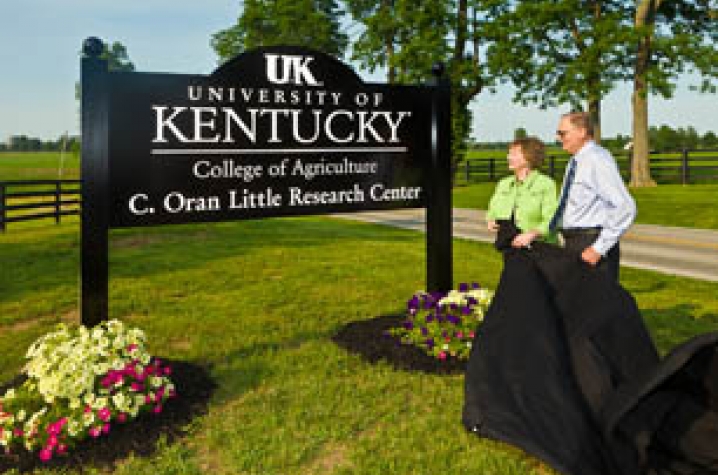 VERSAILLES, Ky., (June 7, 2011) — The University of Kentucky College of Agriculture hosted an event on June 3 honoring its former dean, C. Oran Little, at the research center that now bears his name.  The UK Board of Trustees named the college’s Woodford County farm in his honor earlier this year.

Little was dean from 1988 through 2000, and he led the charge to acquire a new research farm to replace one being repurposed by the university. His stated goal was to develop a cutting-edge research and education facility that made possible programs encompassing, but reaching far beyond, traditional production agriculture studies. UK purchased the farm in Woodford County in 1991, and Little continued to work with key officials to get the aging farm structures replaced with modern research buildings.

Little, his wife Myrtle and their family were joined at the event by friends, UK colleagues and others who helped secure the farm for the college. New signage reflecting the name change has been erected at several of the farm’s entrances along U.S. 60 and U.S. 62.

Throughout his 12-year term as dean, Little was fully engaged in the planning, design and development of the new research farm.

“Continuing to be a recognized part of the College of Agriculture through this action is a tremendous honor,” Little said.

Today, the center is a vital part of the college’s research, teaching and extension missions. Undergraduate and graduate students rely on the farm — through teaching, internships, employment and research projects — to gain hands-on experience integral to agricultural education. Farmers from across Kentucky and many other states attend field days, demonstrations and other extension events held at the farm throughout the year.

The center plays a pivotal role in the college’s research efforts. It is home to hundreds of research activities relating to beef, sheep, swine, equine, environmental stewardship and more. The center is also home to the U.S. Department of Agriculture-Animal Research Service, Forage-Animal Production-Research Unit. Its researchers partner with college faculty on research projects.

“Dean Little was not only an outstanding leader for the College of Agriculture; he was also a nationally recognized animal scientist,” said Scott Smith, dean of the college. “This makes it particularly appropriate that this great research facility be named in his honor.”