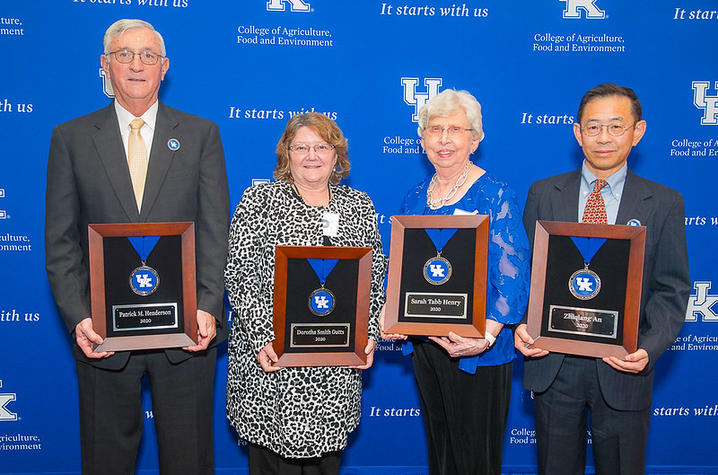 The University of Kentucky College of Agriculture, Food and Environment Hall of Distinguished Alumni’s newest members are (from left) Patrick Henderson, representative of the late Dorotha Smith Oatts, Sarah Tabb Henry and Zhiqiang An.

LEXINGTON, Ky. (Jan. 13, 2020) —The University of Kentucky College of Agriculture, Food and Environment inducted four new members into its Hall of Distinguished Alumni Friday. This year’s recipients include a leader in the field of antibody engineering for cancer therapies, an agricultural educator and advocate, college administrator and home economics leader, and devoted educator and advocate of The Arboretum.

Zhiqiang An, of Houston, received his doctorate in plant pathology in 1991 and has worked in the private sector and academia on drug discovery programs. Today, he is the director of the Texas Therapeutics Institute at the Brown Foundation Institute of Molecular Medicine and the Robert A. Welch Distinguished University Chair in Chemistry at the University of Texas Health Science Center. A holder of 17 patents, he leads a team of scientists focusing on the discovery and development of therapeutic antibodies and antibiotics to treat human diseases including cancer and infectious diseases.

Sarah Tabb Henry, of Lexington, received a bachelor’s degree in home economics in 1956 and three additional degrees in education. Henry’s career included being a high school home economics teacher, a supervisor for the Kentucky Department of Education and university professor. She served as assistant dean of the former UK College of Human Environmental Sciences for 13 years and upon retirement as special assistant to the dean. She continues to be a strong advocate for education and has established the Tabb-Henry scholarship fund in the college.

The late Dorotha Smith Oatts earned a bachelor’s degree in home economics education in 1946 and a master’s degree in home economics in 1950. She was an educator and coordinated the development of a consumer and family life skills program for post-secondary institutions in the 1970s. When she retired in 1982, she turned her attention to her love of gardening, providing leadership during the establishment of The Arboretum, a partnership between UK and Lexington-Fayette Urban County Government. Oatts provided the challenge gift for the fundraising drive to build The Arboretum’s visitors center that bears her name. She continued her support of The Arboretum until her death in 2018.

The biennial Hall of Distinguished Alumni awards are a joint program of the College of Agriculture, Food and Environment Alumni Association and the college. It is the highest alumni award the college bestows.