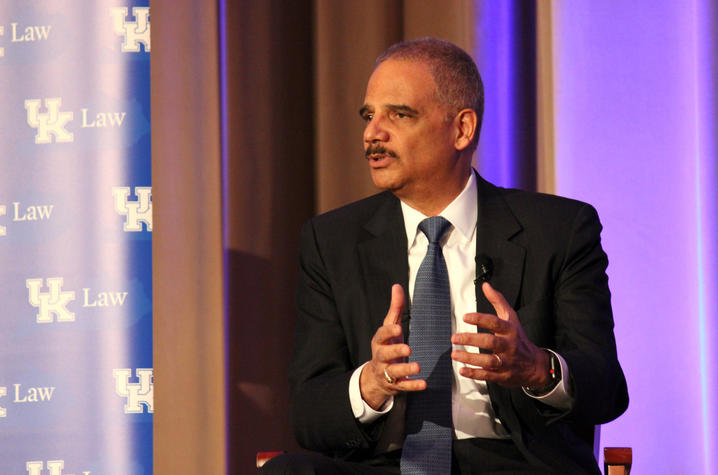 LEXINGTON, Ky. (Feb. 8, 2018) — Much like University of Kentucky College of Law students, former U.S. Attorney General Eric Holder, the first African American to hold that office, saw law as a way to make an impact.

"Through law and working through the system I thought I could be a force for change," he said Tuesday evening on campus.

Holder spoke to a crowd of UK students, faculty, staff and alumni as well as community members in Memorial Hall. Former Kentucky Gov. Steve Beshear was also in attendance. Holder's visit was part of the College of Law's Roy R. and Virginia F. Ray Lecture Series.

Lawyers, among others, have been at the forefront of movements that made this nation great, he said.

Holder weighed in on current issues and shared his experiences as a law student, a black man in the profession and attorney general. Having served in government for more than 30 years, Holder also shared what shaped his view of government. It was something familiar to all law students: the study of constitutional law.

"It's history through a legal prism," he said. "You can chart the progress of this nation through an understanding of constitutional law — how the system acted appropriately or inappropriately."

Holder served for six years as the 82nd attorney general of the United States under former President Barack Obama. Since leaving the Justice Department, he has rejoined the law firm Covington & Burling LLP as a partner advising clients on complex investigations and litigation matters. He is also spearheading an initiative focused on gerrymandering and redistricting.

During the talk, moderator Melynda Price posed a question from UK Law students about this work going forward and Holder's ultimate goal.

"To make sure everybody who wants to cast a ballot has the opportunity to do so," he responded. To "let the people chart their own course."

Earlier in the day, Holder also met with UK Law's Black Law Students Association and members of the local John Rowe Chapter of the National Bar Association at a luncheon celebrating Black History Month. In addition to recognizing Holder's achievements, the groups also recognized trailblazers in the local legal community.

"We were honored to have Mr. Holder in the heart of the Bluegrass and appreciated him taking the time out of his busy schedule to meet our students and share his experiences," said UK Law Dean David A. Brennen.

Building on Theodore Parker's words that were often echoed by Martin Luther King Jr. — "The arc of the moral universe is long, but it bends towards justice" — Holder left the audience with this final thought:

"That arc bends toward justice, but only when people like you put their hands on that arc and pull it."