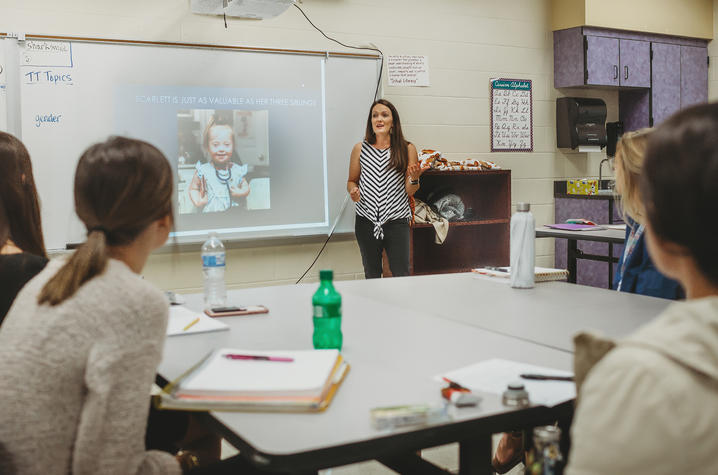 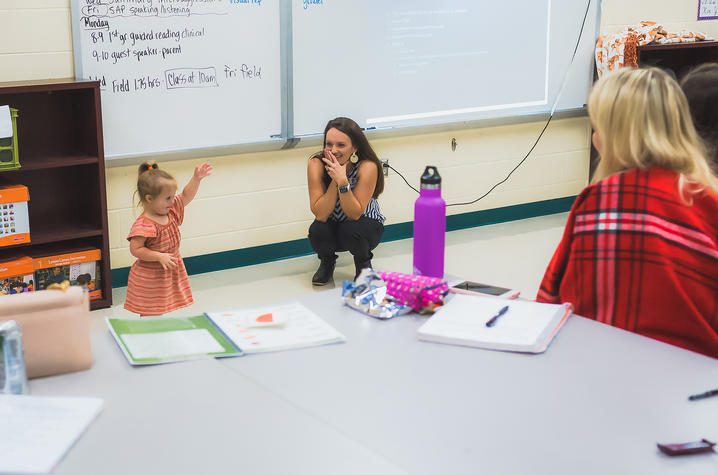 Yost became a teacher when she graduated from the University of Kentucky College of Education. However, she didn't imagine the most important lessons she would someday impart would come, in many ways, from what she would learn from her own child — nor did she predict that what her daughter would teach her would be used to help future educators.

When you give birth to a fourth child in six years, you go to the hospital half-expecting it to feel like a vacation. At least, that’s how Yost saw it. With three children at home, she looked forward to having alone time, with trays of hospital food and someone else doing the dishes.

Prior to having children, Yost worked as a middle school mathematics teacher. She was at ease in the classroom, guiding pre-teens as they learned formulas and equations. As easily as numbers came to her, there was one calculation Yost had not given much thought during her fourth pregnancy — the chance of having a baby born with an extra chromosome.

In October 2016, she felt the familiar signs of labor and went to the hospital. The pregnancy had gone well, and she labored easily. Out came a pink, beautiful newborn named Scarlett. As Yost cradled Scarlett to her chest, she began peppering her with hugs and kisses. She stroked her daughter’s skin, saying how much she loved her and welcoming her to the family.

Scarlett had entered the world weighing 6 pounds, 5 ounces and was 18 inches long. She had big, rosy red cheeks and tiny ears. After a few minutes of bonding with Scarlett, Yost looked up at her husband and asked if he thought she could have Down syndrome, expecting him to suggest she stop being anxious.

Her husband is a physician and Yost knew his “maybe” was a probable “yes.”

The mathematics teacher was entering a world some only know by statistics, rather than personal experience. In fact, Scarlett was the first person with Down syndrome Yost had ever met. As anxiety set in, she began calculating the impact this news would have on her family.

“We had our family waiting in the lobby to meet the baby and we didn’t know what to do,” Yost said. “We told them we are pretty sure she has Down syndrome. We all cried and were devastated.”

The next day, three friends visited Yost in the hospital. Instead of focusing on her diagnosis, they just wanted to snuggle Scarlett, dress her in cute hats and take turns holding her.

“Their visit helped change the tone for us,” Yost said. “We realized, oh wait, she is here and she is valuable. We are not mourning her. She deserves to be celebrated like everyone else. She is awesome. The doctors can manage her medical care, but we are going to focus on celebrating her.”

Not long after bringing Scarlett home, Yost connected with the Down Syndrome Association of Central Kentucky. She credits the organization for providing her with the vital friendships and support needed for this unexpected journey, and encourages teachers to connect with the organization’s resources if they have a child in class who has Down syndrome.

“It’s now nearly three years later, and Scarlett is amazing,” Yost said. “She is so cute and so smart. She has made our lives richer and fuller, and she has made her siblings amazing people. It has been the most amazing journey.”

As a former UK cheerleader, Yost is at ease in front of an audience and has been doing everything she can since her daughter’s birth to raise awareness. She is particularly passionate about reaching people who may never have interacted with an individual who has Down syndrome. Returning to her teaching roots, she visits classrooms to give children the experience of meeting Scarlett — someone who is very much like them, but who also happens to have Down syndrome.

As an alumna of the UK College of Education, Yost felt meeting with future teachers was a logical next step in raising awareness. Scarlett showed off her skills to the college students, and Yost played a video of Scarlett cheering “C-A-T-S cats, cats, cats!” while waiting in the exam room at a recent doctor appointment. While teaching may need to be adapted to meet Scarlett’s needs, Yost wants teachers to set their expectations high for Scarlett, rather than seeing Down syndrome as something holding her back.

As Scarlett gets closer to entering kindergarten, Yost is focused on helping the transition go smoothly for both Scarlett and her teachers, who she knows will help set the tone for how Scarlett is received by her classmates.

“I want her to be a valuable member of her classroom and community,” Yost said. “I want her to be included, to have friends, to learn, and to be happy. We all have strengths and weaknesses. I want to help her find her strengths to be successful in life.”

It is the goal of faculty in the College of Education to equip future teachers to offer students a welcoming, equitable learning environment.

Kim White, an associate clinical professor of elementary education at UK, heard Yost's story and knew her students needed to hear it. White and her elementary education colleagues in the Department of Curriculum and Instruction have been revamping curriculum to have a social justice lens. As they develop lessons around inequities related to gender, race, ability, ethnicity and class, they are on the lookout for real-world examples to help students develop radars to notice inequities and ways to avoid perpetuating them.

“We are infusing current readings and research into our classroom management course around the themes of inequities related to gender, race, ability, ethnicity and class,” White said. “We are taking each category and doing a deeper dive into what it looks like in our lives, and in classrooms in particular.”

“One example I gave students seemed to really open their eyes about how subtle these issues can be. They may go into a classroom and say to a child ‘Oh, you look so cute today. Look at that bow in your hair. It matches your outfit. Is that new?’” White said. “You are pointing out to this one child these new things and how she looks. But, there are other children in there hearing that, and maybe getting new outfits isn’t part of their reality. They are taking all of that in and it is becoming part of who they think they are, and they may feel they don’t measure up. It is very subtle, but it is an example of how classism can appear in a classroom.”

The students in her courses are developing their own radar for what bias looks like so they won’t repeat it, White said.

“I’ve been honest with my students about the journey I am still on,” White said. “The more I learn about implicit bias, the more I am aware of what goes on all around me. I’m still with my own bias lenses, and I’m still learning. On this journey, I have learned so much about my privilege that I just never thought about before, because I had never been challenged on that. That’s what we want to help our students do as well.”