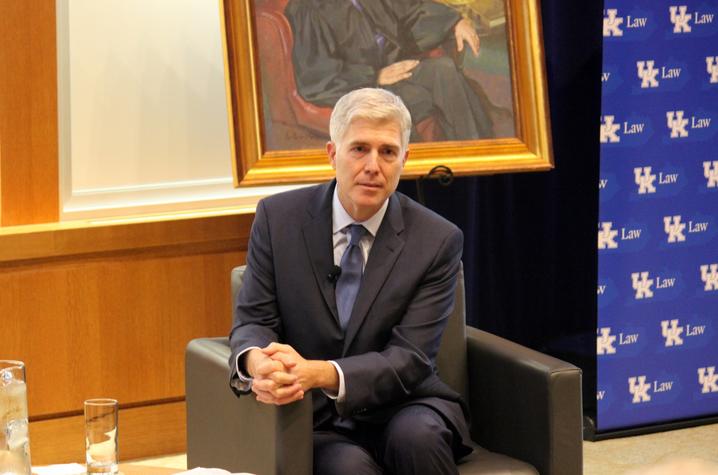 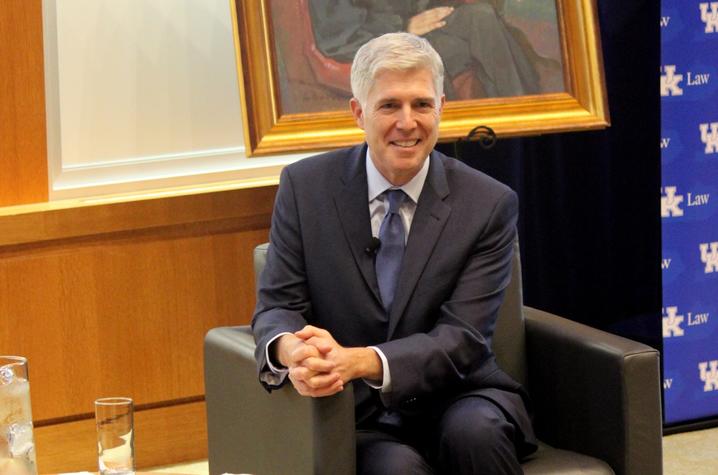 During his talk, he offered a few pointers to UK Law students in the crowd.

"Give back a little bit. If you’ve made it to an institution like this, you’ve been blessed and have a lot to offer your fellow citizens," he said.

Justice Gorsuch was here as part of the John G. Heyburn II Initiative for Excellence in the Federal Judiciary.

“The Heyburn Initiative enhances the academic experience for our students by providing them with the opportunity to listen to, and engage with, some of our nation’s top leaders in law. The College of Law is one of very few law schools to offer this type of access to speakers of the highest caliber on an annual basis,” said David A. Brennen, dean at UK Law. “This initiative continues to help UK Law carry on its tradition of excellence and we were honored to host Justice Gorsuch for his first public lecture for a law school since being appointed to the Supreme Court.”

After being introduced by U.S. Senate Majority Leader Mitch McConnell, the justice spoke to a packed crowd in the Gatton College of Business and Economics' Kincaid Auditorium. UK Law Professor Paul Salamanca served as moderator and posed several questions to the justice on different topics, including his relationships with other justices and advice for law students.

"Practice law so that you can look back after a 30-year career and be proud,” he told UK Law students and practitioners in the audience.

Justice Gorsuch was born in Denver, Colorado, Aug. 29, 1967. He and his wife Louise have two daughters. He received a B.A. from Columbia University, a J.D. from Harvard Law School, and a D.Phil. from Oxford University. He served as a law clerk to Judge David  B. Sentelle of the United States Court of Appeals for the District of Columbia Circuit, and as a law clerk to Justice Byron White and Justice Anthony M. Kennedy of the Supreme Court of the United States. From 1995-2005, he was in private practice, and from 2005-2006 he was Principal Deputy Associate Attorney General at the U.S. Department of Justice.

He was appointed to the United States Court of Appeals for the Tenth Circuit in 2006. He served on the Standing Committee on Rules for Practice and Procedure of the U.S. Judicial Conference, and as chairman of the Advisory Committee on Rules of Appellate Procedure. He taught at the University of Colorado Law School.

President Donald J. Trump nominated him as an Associate Justice of the Supreme Court, and he took his seat on April 10, 2017.

In addition to his talk Thursday evening, the justice also participated in a forum Friday morning with approximately 130 law students, moderated by James C. Duff, director of the Administrative Office of the U.S. Courts and former UK basketball player.

For more information about the John G. Heyburn II Initiative for Excellence in the Federal Judiciary, visit www.heyburninitiative.org.