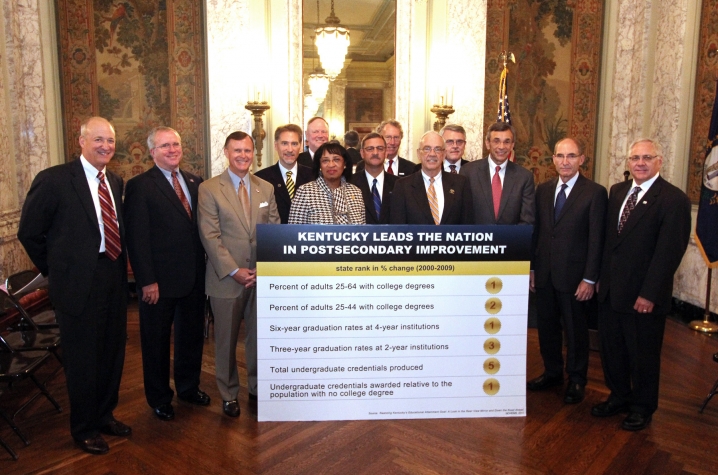 FRANKFORT, Ky. (Sept. 7, 2011) — Over the past decade, Kentucky has improved faster than any state in the nation on key higher education performance measures, according to a report issued by the National Center for Higher Education Management Systems of Boulder, Colo.

"Realizing Kentucky’s Educational Attainment Goal: A Look in the Rear View Mirror and Down the Road Ahead" measures Kentucky’s rate of improvement on key metrics from 2000 to 2009.

The report found that Kentucky ranked first among all states on three metrics, including the rate of improvement in the percent of working-age adults with college degrees, six-year graduation rates at four-year colleges and universities, and the number of undergraduate credentials awarded relative to the population with no college degree.

The announcement was made at a news conference attended by Gov. Steve Beshear and other dignitaries instrumental in the passage of the Kentucky Postsecondary Education Improvement Act of 1997 (House Bill 1). The landmark legislation was signed into law by former Gov. Paul E. Patton, who now serves as the chair of the Council on Postsecondary Education.

“We are here today to acknowledge and celebrate the tremendous progress that has been made by Kentucky’s postsecondary system on key measures of educational performance," Beshear said.  "This kind of success would not be possible without the dedication of many leaders, educators and volunteers who made higher education improvement a priority. Better education – and better access to education – are keys to sustained economic growth for our state.  Investing in higher education is not only an investment in our students, but also an investment in our economy and future economic competitiveness.”

Council President Bob King said, “This progress validates the vision of HB1, which created a new set of expectations for postsecondary education tied to higher levels of degree production, economic growth and greater opportunity for all citizens.

“While we are improving at a faster rate than other states on these measures, Kentucky still faces challenges that we will focus on over the next several years, including college and career readiness, achievement gaps, and better connecting the work of higher education with the state’s economic needs.”

The report’s key findings are described below.

The report is available at http://cpe.ky.gov/planning/NCHEMSreport.