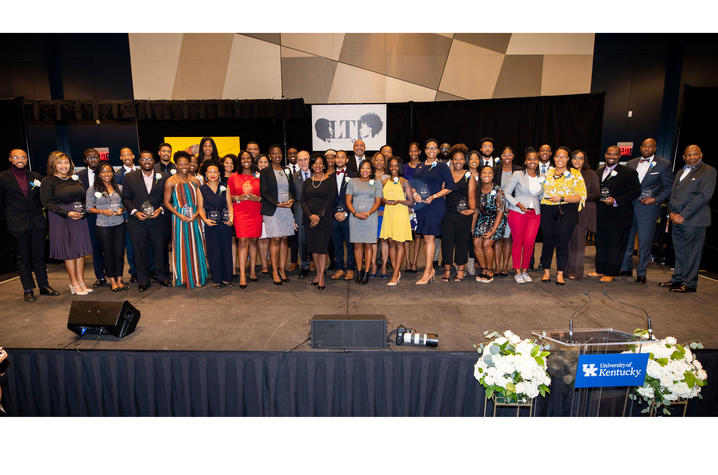 UK’s academic colleges and units selected one African American alum whose faith, hard work and determination has positively affected the lives of people on the UK campus, the city, state or nation. These individuals received the Lyman T. Johnson Torch of Excellence Award. These units also chose an African American student within their respective colleges/departments whose academic achievement and ability to impact the lives of others warrant them the Lyman T. Johnson Torch Bearer Award.

Taunya Phillips, UK Alumni Association president, emceed the event. Imar Lyman Hutchins, grandson of Lyman T. Johnson, was the event’s keynote speaker. A collage portrait of Johnson created by Hutchins was also unveiled. The piece will be on display at the UK Art Museum through Dec. 8 and will then go to the Muhammad Ali Center in Louisville as part of its “Inheritance” exhibition. The artwork will then be returned to UK later next year when it will be installed permanently in Lyman T. Johnson Hall at UK. Read more on Hutchins’ artwork here.

College of Agriculture, Food and Environment

College of Arts and Sciences

Gatton College of Business and Economics

College of Communication and Information