LEXINGTON, Ky. (May 9, 2019) — It was a day that exceeded all expectations and showed the generosity of the University of Kentucky community. One Day for UK, the university’s first giving day, raised more than $1 million on April 17 — benefiting colleges, programs and causes across campus.

“One Day for UK was an outstanding day for the university,” Anne Lichtenberg, director of annual giving, said. “It was inspiring to see our community come together. The UK family truly showed what Kentucky can do.”

“It was exciting to see alumni, faculty, staff, parents, students and friends support a variety of causes at the university,” Sarah Fitzgerald, associate director of annual giving, said. “I want to thank everyone who participated in our first One Day for UK. It has set the bar for all future giving days.”

The day also raised awareness about the diversity of places and programs to support. “We had great participation across the board,” Fitzgerald continued. “Both small and large units benefited from the day, and it was nice to see where people gave. The turnout was overwhelming and showed how much people love UK.”

All of the day’s funds supported Kentucky Can: The 21st Century Campaign, the university’s comprehensive campaign to increase scholarship support, to fund innovative research, to advance health care, to strengthen the alumni network, to enhance UK’s athletic programs and to grow the university’s endowment. UK is already more than halfway to its $2.1 billion campaign goal.

“When we launched the campaign in September, we said that Kentucky Can would ensure UK’s future and would bring momentous change to the Commonwealth,” D. Michael Richey, vice president for philanthropy and alumni engagement, said. “In eight months, we have already seen the impact of the campaign. With lead gifts, donors have ensured more students have access to a UK education. Corporations and individuals have enhanced our research, allowing UK to tackle some of the biggest problems facing our state, nation and world. And alumni throughout the world have established endowments that will sustain and grow UK well into the future."

One of Kentucky Can’s goals is to increase alumni giving by 21 percent. Alumni participation rates show the loyalty and dedication of a university’s alumni base. Higher giving rates indicate a broad base of support for an institution, positioning it for future success. Alumni giving also impacts national rankings, the university’s reputation and future enrollment, and it shows corporations, foundations and other donors that UK is a wise investment. As a result, high alumni giving rates can attract additional private support that will strengthen UK’s endowment and provide necessary funding for future programs and initiatives.

UK is currently ranked 13th in the nation in alumni giving participation among the 50 flagship universities — the primary, most recognizable public institution in a state — and 33rd among the 484 public universities that participated in the Council for Aid to Education’s 2017 Voluntary Support of Education Survey.

“These are incredible statistics that truly show the loyalty and dedication of our alumni base,” Richey said. “One Day for UK could elevate those rankings, making UK one of the top 10 state flagship universities and one of the top 20 universities nationally for alumni participation.” 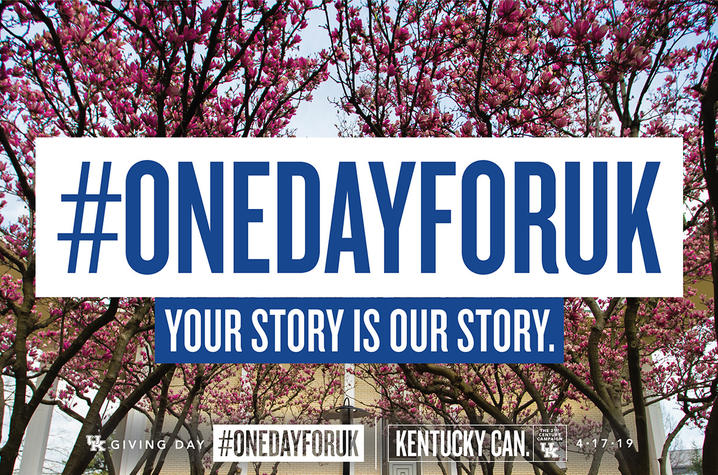