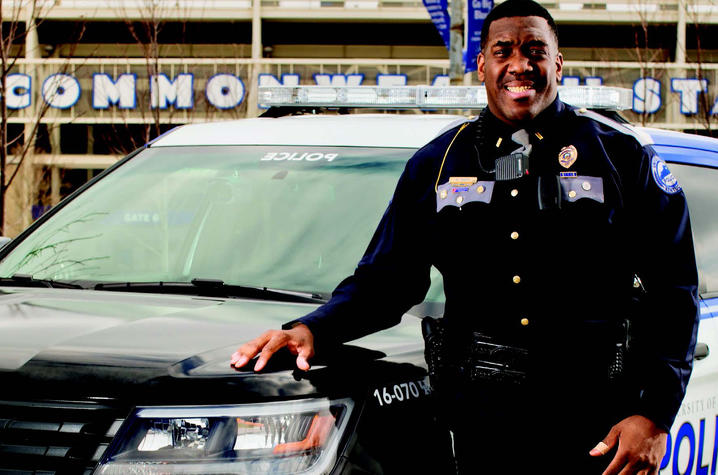 LEXINGTON, Ky. (Feb. 27, 2018) — When Eric Scott (2008, College of Communication and Information) saw his football career come to an end after two years in the National Football League, he knew two things: He wanted to finish his master’s degree, and his future career was not going to have him stuck behind a desk.

He had no idea that mission would lead him to where he is now … as a lieutenant in the UK Police Department.

Scott, who played football at UK from 2003-2007 and then played two seasons for the NFL’s Tennessee Titans, has been with the department for eight years. He says it has been the best career he could have hoped for. Scott did not know it at the time, but his interest in law enforcement began during his playing days at UK. Kevin Franklin, a captain on the force, was one of the officers assigned as security to accompany the football team on road trips.

Scott says Franklin became a good friend and mentor at UK, and they reconnected when Scott returned to Lexington to finish working on his master’s degree.

“When I got hurt, I decided to come back to Lexington,” Scott said. “I went to a career fair because I was looking for a graduate assistant job to pay for the second half of my master’s (degree). As soon as I walked in the door, I saw this giant FBI banner. All the investigative stuff they did drew my attention.

“I had done internships with Wells Fargo, and I was completely miserable behind a desk. When I saw that FBI banner, it intrigued me. Next to the banner was the UK Police Force banner, and behind it were Capt. Kevin Franklin and Maj. Nathan Brown. So when I saw those two there, I kind of hit it off with them,” explained Scott.

Scott told Franklin he was looking to finish up graduate school, and the police force interested him. He found out the force was hiring, which meant Scott could pay for his schooling as a UK employee.

“For me, it was kind of a sign. I could not only come here to get school paid for, but they’ll give me a salary, as well. I had never thought about applying for a law enforcement job before, but as soon as I saw them I knew this was what I was supposed to be doing,” Scott said. “I was basically looking for the complete opposite of a desk job, and policing was that for me.”

Scott’s athletic career prepared him for what law enforcement entailed.

“You have to stay fit. Teamwork is involved. There are a lot of characteristics in athletics that are similar to policing,” he said. “It was an immediate attraction. I will say it does take a lot of patience. In football, every play lasts about three-and-a-half seconds. So if you are frustrated, you have three-and-a-half seconds to take out that frustration. In law enforcement, you have to remain patient and professional and understand no matter the situation, you have to remain cool. That’s one of the differences from sports.”

That patience was tested once Scott joined the force. He tended to be a little too recognizable, especially when dealing with students, many having been his friends just a few years earlier.

“It’s quite the scene when it’s me at 6'4", 280 pounds, hopping out of a cruiser and walking toward a person and telling them to stop whatever they’re doing,” Scott said. “And then a buddy sees me and goes, ‘Hey, how you doing, Eric?’ It can ruin the whole presence of being professional and firm.”

Scott, who has three daughters, is happy with his life and career in Lexington now, but he is looking ahead. He has thought about joining the FBI or U.S. Marshals Service in the future.

Scott has also been able to give back to an athletics program that he credits with helping him become the man he is now. From 2009-2016, Scott traveled with the football team full time and part time with the basketball team on road trips. Aside from providing security for the head coach, Scott says he tried to show players different sides of the police than some of them were used to seeing.

“I was a resource for players, kind of an advisor, and gave them guidance,” he said. “With my background, the players trusted me. Those guys, it’s hard for some of them to trust the police with their backgrounds. It was one of the coolest details I’ve had at the university.

“UK Athletics has bent over backward for me in my career and has been an awesome resource. I’ll forever be in its debt. They took a kid from Atlanta at age 18 and helped turn him into a man. With Rich Brooks, Joker Phillips and Mitch Barnhart and their guidance, I’ll forever be indebted to them for helping me grow and get to where I am today.”