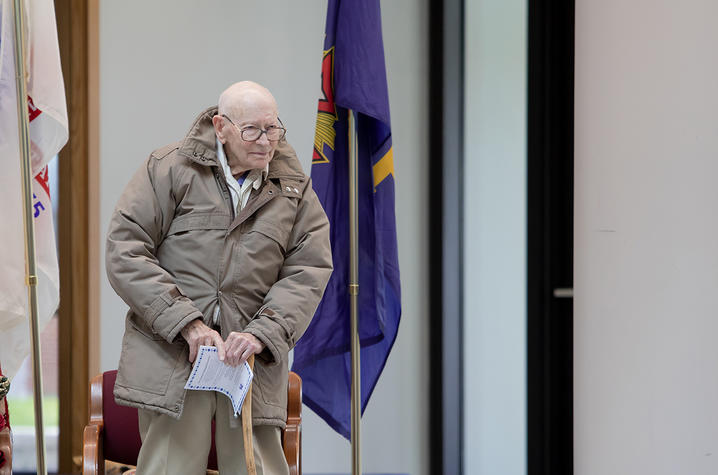 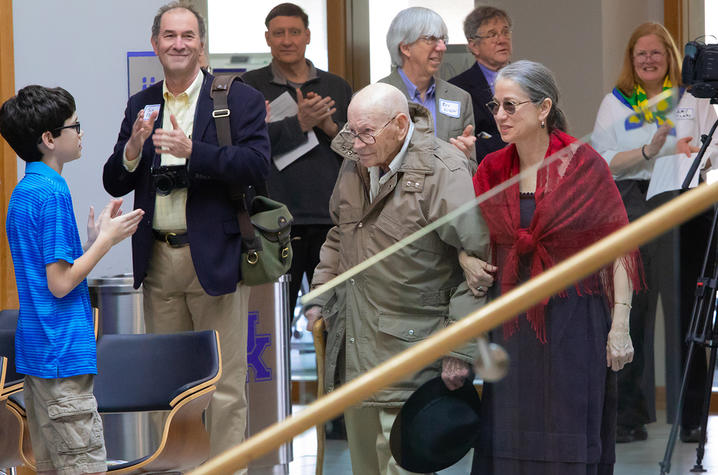 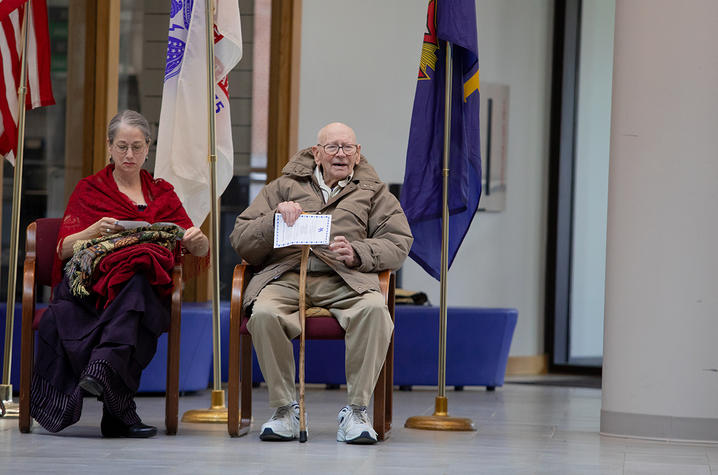 Family, friends and colleagues threw a surprise party in his honor. Festivities included a military honor guard and the singing of “Happy Birthday to You” and the Army song by the UK Department of History's faculty. One of Roland's doctoral students, Thomas Appleton, presented a resolution commending Roland on behalf of UK President Eli Capilouto.

Roland, the son and grandson of teachers, holds a bachelor's degree from Vanderbilt University, a master's degree from George Washington University and a doctoral degree in history from Louisiana State University.

As a former captain in the United States Army, Roland's achievements reach far beyond the classroom. The Tennessee native was among the ranks of the greatest generation of citizen-soldiers who liberated the world from Hitler's tyranny in World War II.

Roland was deployed in the European theater with the 99th Infantry Division that fought in the Battle of the Bulge. He earned the Purple Heart for being wounded in battle and the Bronze Star for meritorious service.

Following his military career, Roland was a lecturer and guest professor at the United States Military Academy at West Point. He later came to Lexington from Tulane University in 1970. He is one of the most recognized authorities on the Civil War, and his lessons to students about war were often based on his own experiences.

Roland also held several visiting professorships and lectureships at the University of Alabama, Army Military History Institute, Army War College and the Franklin D. and Eleanor Roosevelt Institute at Middelburg in the Netherlands.

Roland is also a renowned author. His memoir, "My Odyssey Through History," compares World War II with the Civil War. The book, published in 2003, provides firsthand accounts about growing up in the South during the Great Depression, soldiering in World War II and teaching college history.

Roland also used his knowledge of the battlefield to author several books on the American South including: "Louisiana Sugar Plantations During the Civil War," "The Confederacy," "Albert Sidney Johnston: Soldier of Three Republics," "A History of the South," "The Improbable Era: The South Since World War II," "An American Iliad: The Story of the Civil War," "Reflections on Lee: A Historian’s Assessment," "Jefferson Davis’s Greatest General: Albert Sidney Johnston," "New Perspectives on the South" and, most recently, "History Teaches Us to Hope: Reflections on the Civil War and Southern History."

Roland retired from UK in 1988 at the age of 70, but he has remained an active scholar, author, editor and lecturer into his 90s.

"It was a privilege for the Department of History to honor the accomplishments of Professor Charles P. Roland. Since he retired, many of our current faculty and students know of Professor Roland because of the graduate student scholarship endowment in his name. This event allowed us to honor him in person not only for his service in the United States Army during the Second World War, including at the Remagen bridgehead, but also for his outstanding career as an historian of the U.S. South," said Professor Karen Petrone, chair of the Department of History. "His work on the American Civil War was informed not only by his own war experience in the Second World War, but also by his contact, as a young man, with the aging veterans of the Civil War. We are delighted to celebrate the accomplishments of Professor Roland’s life."

Named in his honor, the Charles P. Roland Fellowship, established in 1988, supports outstanding UK students in the history department who are pursuing research interests in American history, especially the history of the Civil War, race relations and the American South.

You can donate to the History Development Fund online.