LEXINGTON, Ky. (May 10, 2020) — Chynna Hibbitts is well known for student leadership within the University of Kentucky J. David Rosenberg College of Law. She’s president of the UK Student Bar Association, communications editor for the Kentucky Law Journal, recipient of the Lyman T. Johnson Torch Bearer Award for the college and participated in the dedication of the new Rosenberg College of Law Building – all as a single mother.

“Everything that I’ve done since she’s been born has been to provide a better life for her. And I have to stop and think about every decision I made in law school about where I’m going to work, how much is it going to provide, because I’m not just taking care of myself — I’m taking care of her. She’s always at the forefront of my mind when I’m making decisions.”

If all had gone to plan this semester, the law graduate would have been at the Singletary Center for the Arts, seated side-by-side with her classmates, anxiously awaiting her name to be called, and for interim Dean Mary J. Davis to welcome her to stage with a very symbolic piece of paper in hand. She would have hugged classmates, thanked faculty members, and said goodbye to the people who have changed her life these last three years.

But this semester did not go as planned, much like Hibbitts’ own journey to this moment in her life.

Law school was not a part of her initial career path. After graduating from high school, Hibbitts headed to college at the University of Louisville. But after two years, she took a pause to move back home and spend time with family.

Hibbitts has long held a deep passion for sports, and during that break she moved to Atlanta and worked for several semi-professional and minor league teams. But soon after, her mother was diagnosed with colon cancer a few months into Hibbitts’ pregnancy with daughter Maiya.

So, in 2013, Hibbitts packed up and headed back to her hometown of Prestonsburg, Kentucky. She wanted to complete her degree, but at the time, most institutions were not offering online education opportunities and paying out-of-state tuition was not an option.

It wasn’t until she moved back home and started working with one of the four free legal aid programs in Kentucky, the Appalachian Research and Defense Fund of Kentucky, that she began to think about law school as a possible career path.

“Over the course of the first year I worked there I was dead set against becoming a lawyer. In the beginning it was simply something to pass the time while I was finishing my undergrad degree, but it became so much more than that.”

She adored her role at the “AppalReD,” but worried about the responsibilities and pressure of working on the legal side of things. That all changed when she began working on cases, performing client interviews and observed first-hand the impact the organization was having on families.

Hibbitts was tasked with orating a speech on the organization’s founder, John Rosenberg, a Holocaust survivor, U.S. Air Force veteran and esteemed attorney.

“Reading his story, coupled with what I was doing at the firm, sparked my interest in thinking about law school. Seeing what John, and his wife Jean, have done with their lives — putting so many ahead of themselves — is a level of service I wanted to strive to reach, and that is how I ended up going to law school.”

She was able to finish her general education requirements at a local community college and returned to UofL to complete her bachelor’s in communication and sport administration in 2017.

After she had made up her mind about attending law school, the decision of “where” came much easier. From the moment she visited the UK campus and the law school, she felt that this is where she was meant to be.

“I chose the Rosenberg College of Law because it felt like the place I would be comfortable for three years. Many students are afraid they will end up as a number at law school, but our community is so small that it is more like a family. It has been great to have this as a home away from home.”

Throughout her law school career she has been blessed with the “best babysitter,” in her mother, who has taken care of granddaughter Maiya these last three years.

Right before Hibbitts left Prestonsburg to start law school in Lexington, her mother was diagnosed with breast cancer.

“I felt a lot of guilt because I was already planning to leave and she was supposed to take care of my daughter. But she told me that if I didn’t go now, there may not be a chance for me to go back.”

The first year of law school was a challenge for Hibbits, as it can be for many law students, adjusting to the amount of coursework and a new schedule. She and her mother worked out a FaceTime schedule so that she could check in each evening, and on the few occasions that Hibbitts needed to bring her daughter to class, she was warmly welcomed.

“I could never have made it through without my mom, and even when I had to bring Maiya to school she was welcomed with open arms.”

“A lot of people think having a child in law school is a liability, but I have found that having those skills as a parent has helped me manage personalities, excel in time management and just be an overall better person because of it.”

Although she and her classmates will not have the opportunity to have a commencement ceremony in person at the moment, she will still be a member of the first graduating class of the newly named J. David Rosenberg College of Law. This particular class has made school history, beginning their studies across the street from the law building during two years of construction, and ending their final semester scattered across the country, finishing classes from home.

“I am so proud of myself and my classmates because law is one of the most rigorous programs that you can go through, and we did it. To conquer that while being displaced for two years and during a global pandemic speaks volumes of the resilience and determination to make a difference in the legal field.”

Hibbitts had the privilege of speaking at the dedication ceremony for the new law building during the fall 2019 semester in front of a crowded courtroom, standing beside alumnus and donor J. David Rosenberg. Earlier in the year, Rosenberg and his wife Dianne gave a $20 million dollar gift to the College of Law.

“Getting to speak at the event was a tremendous honor. To be the voice of the entire Rosenberg Law student body was a bit nerve-racking, but I took the responsibility with a lot of pride. I cannot wait to see how this gift elevates the way the Rosenberg College of Law is viewed throughout the Commonwealth and the nation.”

Now that Hibbitts has conquered law school, she is setting her sights on the future, and another degree.

This summer she will take the Kentucky Bar Exam and will work at a litigation firm in downtown Lexington. In the fall she will begin a master’s program in recreation and sport administration with a focus on intercollegiate athletic administration. She hopes to merge her two passions, athletics and law, into one fulfilling career.

“It’s been amazing to have such a positive support system in our faculty, staff and administration and I do not say that lightly. You can’t go everywhere and feel the way I felt when I came here. I want to be a vision that the law school can say ‘look if she can go through this and make it, anybody can.’ And that’s probably what I’m most proud of: I set those goals, I accomplished those goals, and now I’m graduating, and I got to fulfill everything I set out to.” 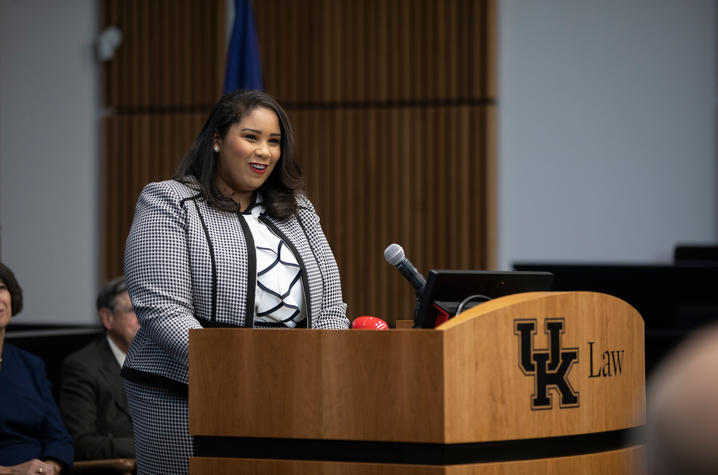 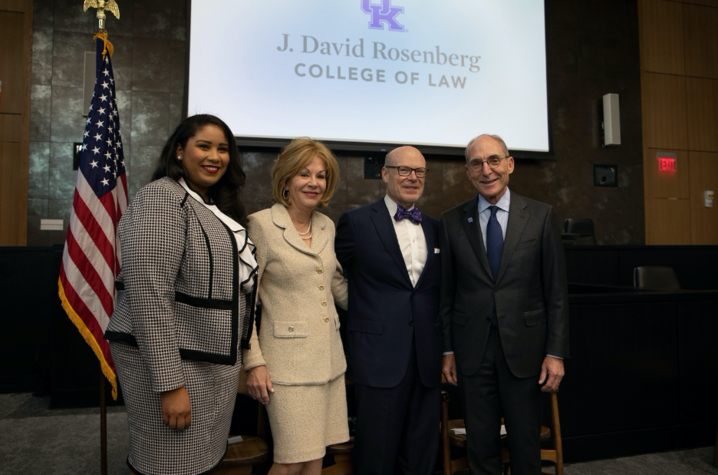