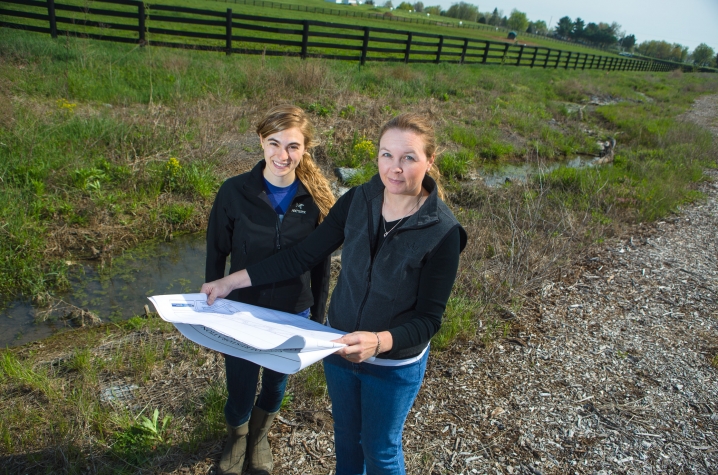 LEXINGTON, Ky. (May 28, 2013) — At the University of Kentucky’s North Farm, a stream reach runs between two horse paddocks on the Maine Chance/Spindletop Farm. Newly planted trees and wildflowers align the banks of the stream, which contains a modest amount of water. Classified as an intermittent stream, it is fed from a spring at a nearby farm and flows about three months out of the year.

In 2010, it was merely a forgotten rut in the earth, something that had once been a stream yet now was dry and largely void of vegetation and wildlife. That was when Carmen Agouridis, a biosystems engineering professor, saw the reach as an opportunity to get her Biosystems and Agricultural Engineering class (BAE 532) some real-world experience in all phases of the stream restoration process.

“This was a fun project that had participation from undergraduate and graduate students as well as faculty in biosystems and agricultural engineering, civil engineering and forestry,” Agouridis said. “In the span of about two and a half years, we were able to restore a stream on UK’s property.”

The first part of the project involved a stream assessment. Students surveyed the bed, noting its width, depth and shape, and they accounted for the materials in the bed as well as nearby vegetation. After submitting a formal analysis, they developed a conceptual design plan proposing the best way to fix the stream.

Around that time, Agouridis received a Natural Resources Conservation grant that would allow the class’s proposal to become a reality. First, however, Agouridis needed to secure permits from the federal government and the Kentucky Division of Water in order to move forward — a task that took six months to complete.

Once the permits were granted, Agouridis and her spring 2011 BAE 532 students were ready to bring in the heavy equipment for digging. Unfortunately, it rained. And rained.

In fact, 2011 was the wettest year on record for Lexington. The dump trucks could not get to the restoration site and the project had to be temporarily shelved; however, the summer of 2012 offered favorable conditions and the work resumed.

Sam Lee contributed to the proposed design as an undergraduate student in 2010. When Agouridis was able to start digging, Lee was a civil engineering graduate student. Agouridis recalls he was eager to participate in the construction process as much as possible.

“The contractor we used, Eric Dawalt, was an alumnus of the Department of Biosystems and Agricultural Engineering, so he helped teach Sam how to use some of the university’s equipment,” she said. “He got to be quite good on it.”

In all, the class restored approximately 900 feet of stream. The project represents UK’s dedication to classroom learning that produces real-world results.

“Students got to participate in all phases of the project,” confirms Agouridis. “They did what anyone would have to do: survey, design, obtain permits, build and provide a post-construction assessment. When the flowers are in bloom this summer, it will look great.”