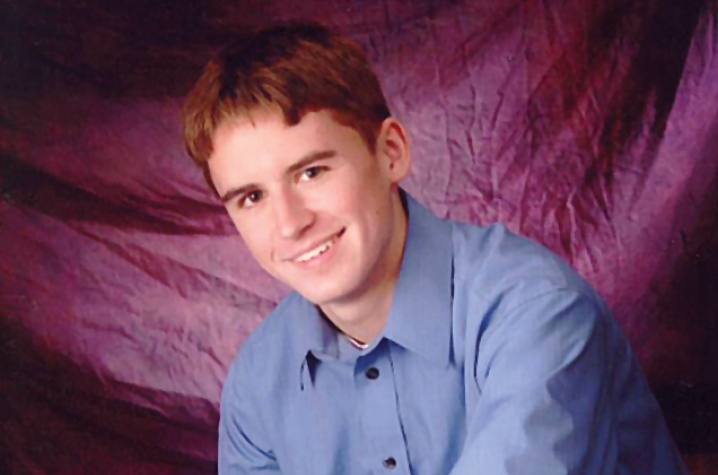 "He felt that as one of the older students, he was responsible for the younger guys on the retreat. For him, that meant he should drive to the facility," Rob recalls. "That was Tom: always thinking of others and looking to serve."

On Sunday morning, as the caravan of students was returning to Lexington on I-75, a part broke on the vehicle Tom was driving, sending it into the opposite lane where it collided with a tractor trailer. The crash took not only his life, but also the life of freshman engineering student Bradley Hall.

In the days following the accident, Tom's friends shared story after story with Rob and his wife, Valerie, about their son's heart and character. "There were so many people who told us about things Tom did for them," Rob said. "Those stories gave us a clear picture of someone who really lived his faith.

"Any parent would have been proud of Tom," Rob shares. "Once he earned a B in calculus, and I fussed at him because he was so good at math that the B was likely due to not putting enough time into his studies. But as his friends and those he touched said things like, 'Tom helped me with my homework,' or 'he came to visit me in the hospital' or, 'I dropped out of the church and he was the only one who would call me,' I understood that my son spent his life doing other things more important than calculus."

The impact Tom had on those who knew him inspired Rob and Valerie to create a scholarship in Tom's memory. The Thomas B. May Memorial Scholarship will furnish approximately $3,000 per year to an engineering student starting with the fall 2012 semester. Once the scholarship is fully endowed, the yearly amount will be $4,000.

"Receiving a scholarship does so much for young people," explains Rob. "It increases their self-esteem and confidence and allows them to avoid getting buried under student loan debt. Education is important, but not everyone can pay for it."

Director of College Advancement, Jeff Snow, notes the poignancy of the Mays' gift when he says, "Sometimes philanthropy is born from painful events. Tom was a model student and human being with an innate drive to serve others. Whether volunteering to help students during freshman move-in or answering a call to gather a group of students to respond to a pressing need, people who knew Tom knew he would answer the call with enthusiasm. We anticipate that this scholarship will touch others' lives through Tom's remembrance."

The May family legacy began when Tom's father, Rob, received a bachelor's degree in civil engineering from UK in 1974. Tom's older brother, also named Rob, received a bachelor's in electrical engineering in 2000, and Tom's youngest brother, Scott, is currently pursuing a degree in computer science (Tom's two sisters also attended UK). Because the Mays are funding an endowed scholarship, Tom's presence in the College of Engineering will remain in perpetuity.

"We believe Tom's life deserves to be remembered and the scholarship is consistent with his character as a servant," Valerie said. "I remember how relieved I was when Tom was awarded scholarships, and we believe it would make Tom happy to know he was helping people."

For information regarding how you can make your own contribution to the Thomas B. May Memorial Scholarship, please contact Jeff Snow in the Office of Engineering Advancement at (859) 257-9191 or jnsnow@engr.uky.edu.