LEXINGTON, Ky. (July 16, 2012) — In a lengthy television interview being broadcast across most of the state, University of Kentucky President Eli Capilouto is touting the university's "bright future" even in the midst of a challenging budget and economy.

"We are fulfilling our promise … You should be very optimistic about the future," Capilouto says during the 30-minute program produced by UK. "We are making the hard decisions to secure that future, to win that future for Kentucky."

The broadcast, titled "UKNow In Depth ― Fulfilling the Kentucky Promise," is the result of a partnership between WKYT-TV in Lexington and UK's Public Relations and Marketing department.

The show contains an interview with Capilouto discussing the university's budget and agenda for the future, along with stories about students, faculty and staff at UK that underscore what the president calls "The Kentucky Promise." UK's recently adopted $2.6 billion budget contains more than $40 million in reallocations, but also millions of dollars in investments in scholarships, financial aid and campus construction to support research and teaching.

Capilouto also is pledging to create a 5 percent merit raise pool for faculty and staff for the 2013-2014 year, while holding tuition increases to no more than 3 percent that year as well. The program aired on Saturday, July 14, on WKYT in Lexington, and on Sunday, July 15, on WYMT in Hazard. A third broadcast is scheduled at 5 p.m. on Sunday, July 29, on WBKO in Bowling Green.

"I have tremendous respect for the tough decisions Dr. Capilouto and the university are making right now, decisions that many institutions and businesses are making to ensure a brighter future for employees and their families," said Wayne Martin, regional vice president with Gray Television and president and general manager of WKYT-TV in Lexington. “As corporate citizens in this state, we want to be a part of the solution by giving our viewers insight into the complex decisions being made.” 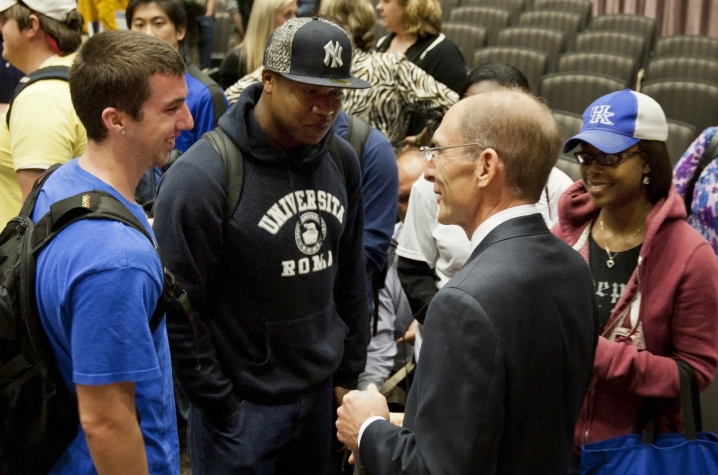