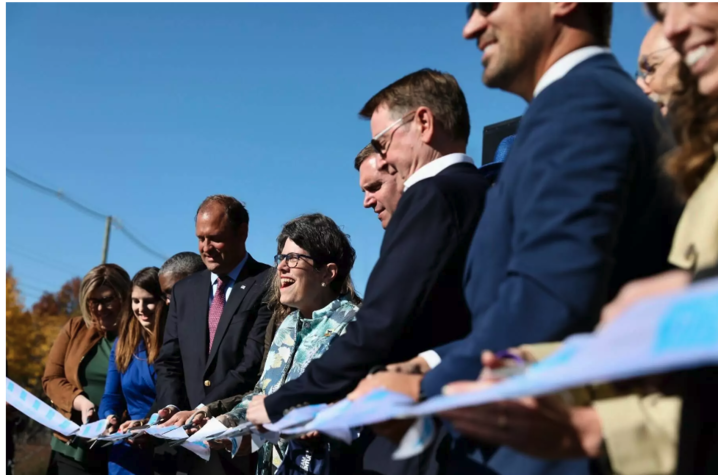 The trail follows the historic path of the Town Branch Creek which is buried in a culvert under Vine Street. The creek emerges behind Rupp Arena and will be the primary feature of Town Branch Park, which is still in development. The project started back in 2020 and was funded by a $21 million federal grant.

The commons and park in their current iterations were pitched in a design competition jointly hosted by the University of Kentucky, the UK College of Design and the Lexington Downtown Development Authority (LDDA), which at the time was led by Jeff Fugate, associate professor of Extension and program director for the Urban & Environmental Design Program in the School of Architecture.

“I’m proud of the role that University of Kentucky graduates had in bringing this project from SCAPE’s vision to the reality that we are celebrating this month,” said Ned Crankshaw, College of Design acting dean and professor of landscape architecture for the College of Agriculture, Food and Environment.

Several other members of the UK community were involved in the project’s planning and creation. Former College of Design Dean Michael Speaks was instrumental in initiating the college’s involvement, along with UK alumna and Director of Project Management Brandi Peacher. In addition, Crankshaw was on the jury that selected SCAPE’s proposal.

While SCAPE was responsible for the project’s master plan, design firm Gresham Smith worked onsite daily to bring those ideas to life. According to Erin Masterson, “We were the prime consultants who led the engineering and construction documentation phase. We led the transportation and landscape architecture and teamed with the sub-consultants Strand, Element Design, and EHI Consultants. We were also involved in the construction phase of the project where we worked with the contractor to make sure the design intent was built.”

Element Design, a local landscape architecture and civil engineering firm comprised of all UK graduates, collaborated with Gresham Smith to develop the final hardscape, landscape and water feature design as well as detailing for the pedestrian spaces along the commons. As explained by Element partner Ramona Fry, “Element was also responsible for the site design and landscape architecture at the Central Bank Center/Rupp Arena project, helping to foster a truly collaborative design approach between project teams in creating these distinct public spaces with a shared material and landscape language.”

In addition to the paving and stone details that give the Town Branch Commons its unique identity, robust landscape plantings were a critical goal. “The Town Branch Commons design team worked together to implement several creative design strategies to increase soil volume and quality. Element provided the final soil mix designs throughout the corridor to create larger volumes of soil and space for the landscape and trees to thrive, including special bioswale mixes, soil cells and structural soil mixes to meet the unique and changing condition along the commons,” Fry said.

Design students also participated in the project. Ryan Hargrove, associate professor and director of undergraduate studies for landscape architecture led studios related to the Town Branch Commons. "The first-year studio worked closely with SCAPE, audio engineers and other design consultants to create a series of audio podcasts, which are best described as ‘landscape narratives,’” he explained. “SCAPE’s approach of using audio as a part of the design process rather than a medium to describe design products was incredibly innovative. It was a wonderfully beneficial experience, as the students were able to craft rich and creative stories that helped bring the landscape to life for many listeners.”

On the morning of Oct. 13, Gov. Andy Beshear joined Mayor Linda Gorton and Congressman Andy Barr to officially open the Town Branch Commons Trail. The ribbon-cutting was held on the trail near The Met, on East Third Street.

As Peacher explained, it will run through Midland Avenue and Vine Street and make a direct connection to city center. A two-and-a-half-mile loop through the north side of downtown provides access to 22 continuous miles of trails.

Kentucky Secretary of Transportation, former Lexington mayor and College of Design supporter Jim Gray spoke at the event as well. Looking back on his time as mayor, Gray credited the original project managers and others involved. “There’s nothing more important than an idea whose time has come,” said Gray, quoting Victor Hugo. "We had the wisdom to hire SCAPE landscape architect Kate Orff, whose vision really pulled it together. But it took a community to make this happen. Lexington already has a wonderful quality of life, and this just added to it.”