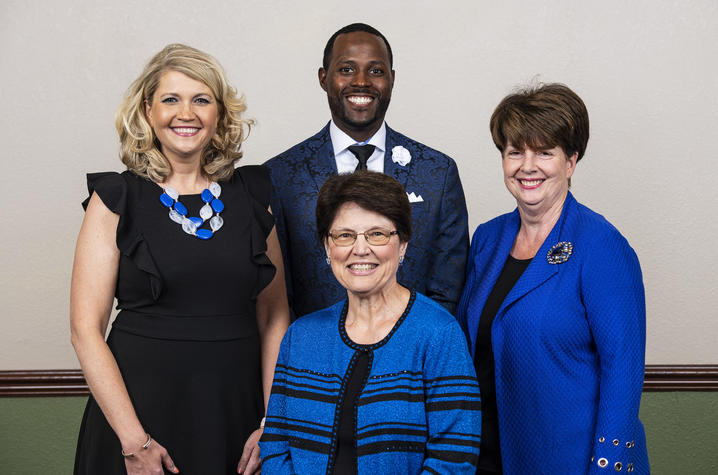 Mary L. Shelman of Belmont, Massachusetts, was elected president of the UK Alumni Association. She received a bachelor’s degree in chemical engineering in 1981 and an MBA from Harvard Business School in 1987. She has been serving as treasurer of the UK Alumni Association this past year and has held several committee leadership positions including chair of Budget, Finance & Investments, Nominating for Board, Diversity and Group Development, and Alumni Service Awards committees. She was also vice-chair of Communications, Membership, and Nominating for Board committees. She is also a 2021 recipient of the UK Alumni Association Distinguished Service Award. Shelman is an internationally recognized thought leader on the global ag-tech and agri-food system. She has consulted, taught and presented at conferences in 20 countries. She is past president of the International Food and Agribusiness Management Association and past president of English At Large, an adult literacy organization. She is a Life Member of the UK Alumni Association and a Wildcat Society member. Shelman is a native of Elizabethtown, Kentucky, where she still owns a farm. She is married to Nathan “Chip” Cohen and they have one son, Alexander "AJ" Shelman-Cohen.

Antoine S. Huffman of Prosper, Texas, was elected president-elect of the UK Alumni Association. He received his bachelor’s degree in telecommunications in 2005. While at Kentucky, he was a three-year starter for the Wildcats football team, becoming a UK NCAA record holder. He was also a member of the UK Athletic Association Board of Directors. He served three years as the Student-Athlete Advisory Committee president, two years as chairman for the UK Athletics Outreach Committee and was a member of the ODK National Leadership Honor Society. In 2005, Huffman became the first African American to be crowned UK Homecoming king. He is active in the community with Habitat for Humanity, Boys and Girls Club, the Salvation Army, and is a motivational speaker at local churches, schools and special regional events. From 2002 to 2005, the Atlanta, Georgia, native was nationally recognized for his community service, academics and athletic achievement. In addition, he was a finalist for the Wuerffel Trophy. He received the ARA Sportsmanship Award, two-time ESPN The Magazine Academic All-America, four-time NCAA Academic All-American, four-time SEC Academic honor-roll, and named a member of the Good Works Team. Huffman has served as chairman for the Membership, Communications, Club Development, and Nomination committees within the UK Alumni Association and served two terms as president of the Greater Nashville UK Alumni Club. He is in the medical field as a regional director of sales for the Southwest and he and his wife, Jessica Kibbe Huffman, who is a UK College of Education graduate, are Life Members of the UK Alumni Association. They have two sons, Jayden and Adonis.

Jill H. Smith of Lexington, Kentucky, is secretary of the UK Alumni Association. She earned a bachelor’s degree in marketing and management from the University of Kentucky in 2005 and a master’s degree in career, technical and leadership education from the University of Kentucky in 2011. She joined the UK Alumni Association in 2006 as a program coordinator and held four other positions at the association before becoming executive director in February 2020. She also serves as associate vice president for alumni engagement and secretary of the UK Alumni Association Board of Directors. She has been an active volunteer with the Council for Advancement and Support of Education at both the state and district level. She is an advisor to the Delta Rho chapter of Delta Delta Delta and an active participant in Lexington area Tri-Delta alumni activities. She is a Life Member of the UK Alumni Association and UK Fellow and serves on several university committees. She and her husband, Ryan Smith, who is a UK College of Agriculture, Food and Environment graduate, have two children, Tanner and Emmy.