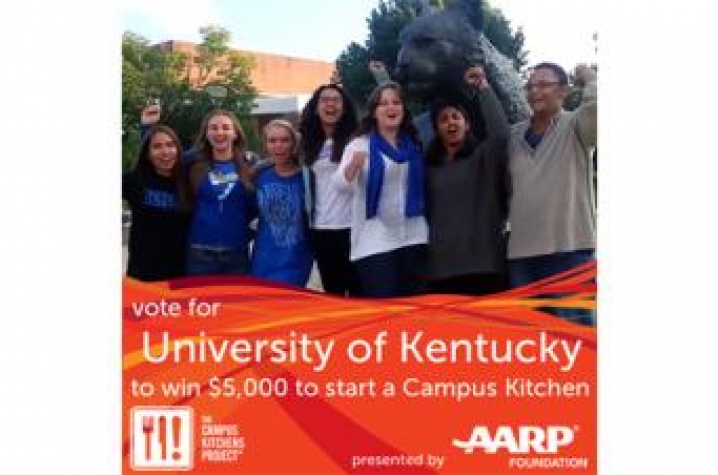 LEXINGTON, Ky., (Oct. 16, 2014) — University of Kentucky students are competing against students at four other schools through Tuesday, Oct. 21 to win a grant to start a Campus Kitchen.

If they are victorious in the competition, student volunteers would provide free, healthy meals to older adults by using donated food that would otherwise go to waste. Students will collect the food from locations such as dining halls, grocery stores, restaurants and farmers markets. The national organization, The Campus Kitchens Project Inc., was founded in 2001 with the goal of empowering college students to fight hunger and to raise awareness about poverty, garden initiatives, nutrition education and food policy where they live.

In order to qualify as one of the five finalists for the competition, students in the UK Department of Dietetics and Human Nutrition submitted a video explaining why Lexington would benefit from a Campus Kitchen. Supporters can vote for the students’ video every day for one week at http://www.campuskitchens.org/aarp. The school with the most votes at the end of the week will win a $5,000 grant from the AARP Foundation to fight older adult hunger in their community.

The rising senior population already includes nearly 9 million older Americans at risk of hunger, a staggering 79 percent increase in 10 years. Kentucky is 18th in the nation for senior hunger, and over 8 percent of the state’s seniors do not know from where their next meal will come.

“As the youngest of the baby boomers reaches 50, the number of seniors at risk for hunger will continue to grow,” said Sandra Bastin, chair of the UK Department of Dietetics and Human Nutrition in the College of Agriculture, Food and Environment. “A Campus Kitchen at UK is a simple solution to provide food and hope to Lexington’s older population.”

If awarded the grant, UK students would work with UK’s dining partner Aramark to collect food from campus eateries.

“Aramark is proud to support the Campus Kitchen at UK to ensure that surplus food is safely donated to those in need within the local community,” said Dan Palombo, Aramark’s vice president of operations at UK.

The winners of the launch grant video competition will join the 17 other Campus Kitchens that focus on fighting food insecurity among senior citizens.