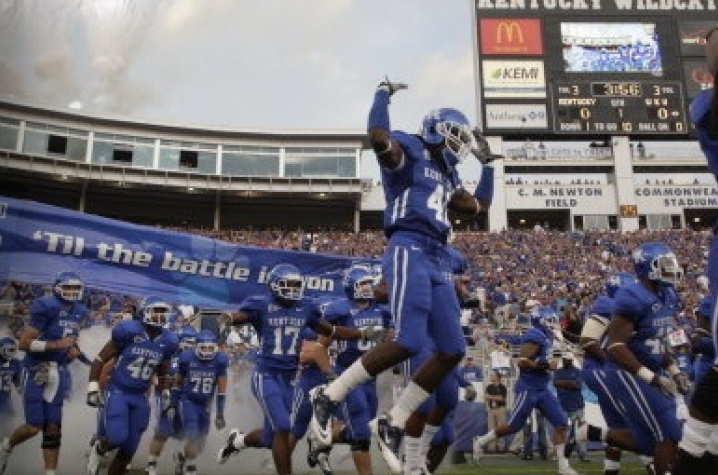 LEXINGTON, Ky. (Dec. 9, 2010) – The University of Kentucky football team has been recognized by the American Football Coaches Association for its graduation rate, it was announced Wednesday.

UK received honorable mention for the AFCA’s Academic Achievement Award, which is presented annually to the school with the nation’s highest Graduation Success Rate calculated by the NCAA. Northwestern University and Rice University shared the national award this year, while UK was among the schools receiving honorable mention for graduating at least 75 percent of its 2003 freshman class.

This is the fifth time that UK has garnered honorable mention, along with 1988, 1991, 1993 and 1994. UK won the overall national award in 1989 for having the highest graduation rate in the nation. The Academic Achievement Award was founded in 1981 by the College Football Association and taken over by the AFCA in 1997 when the CFA disbanded.

This year’s award marks the third time the NCAA’s Graduation Success Rate (GSR) formula has been used to select the winner. From 1981 to 2007, the award was presented based on a formula used by the College Football Association and AFCA. Since 2008, the criteria for the AFCA’s Academic Achievement Award is based on the highest NCAA GSR, at least 15 students in the GSR cohort, and a Federal Graduation Rate of 75 percent or better.

The GSR is based on a six-year graduation window for student-athletes which is a change from the five-year window used by the CFA and AFCA. The GSR was developed by the NCAA as part of its academic reform initiative to more accurately assess the academic success of student-athletes. The GSR holds institutions accountable for transfer students, unlike the federal graduation rate. The GSR also accounts for midyear enrollees.