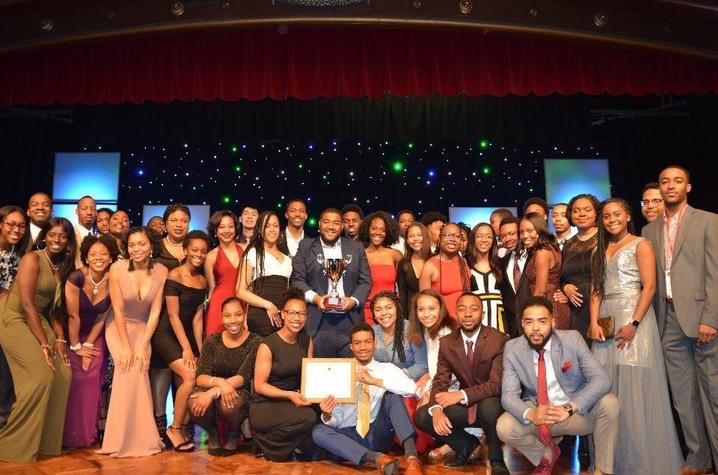 UK MANRRS was named the top chapter in the nation once again.

LEXINGTON, Ky. (April 17, 2018) — For the sixth consecutive year, the University of Kentucky MANRRS chapter was named National Chapter of the Year at the recent 33nd annual conference for Minorities in Agriculture, Natural Resources and Related Sciences. The chapter is housed in the UK College of Agriculture, Food and Environment.

Mia Farrell, interim director of the college’s Office of Diversity and chapter advisor, heaped praise on the students.

“Winning this award six times in a row displays to me that when members and advisors are committed to an organization, and put forth their best work, they reap the rewards,” Farrell said. “The students have worked diligently throughout the year to earn this recognition. The UK MANRRS scholars showcased the work they put forth in 2017 through community service, fundraising, executive board commitment, community engagement and much more.”

Farrell and chapter co-advisors Dale Morgan and Ashley Holt took more than 52 delegates to Greensboro, North Carolina, for the conference. The students’ written report and oral presentation to the national conference described the chapter’s membership, leadership development and community service, and contained ideas for promoting the national society.

“I love going to MANRRS conferences,” she said. “Witnessing minority excellence in agriculture on such a large scale reminds me of how much I love this organization. I can’t wait to help serve the society and represent our region this upcoming year. MANRRS has not only helped me discover my passion and purpose for agriculture, it has also opened so many doors for opportunities and mentors that I can carry throughout my lifetime.”

“The students are as busy as I am, so as an advisor I have to be as committed as the members,” Farrell said. “As a leader, I do not expect them to do what I wouldn't do. I have developed relationships, and we have seen continued success. I am very proud of these students and excited about the future of agriculture.”

For more information about UK MANRRS and the UK CAFE Office of Diversity, visit http://diversity.ca.uky.edu/.