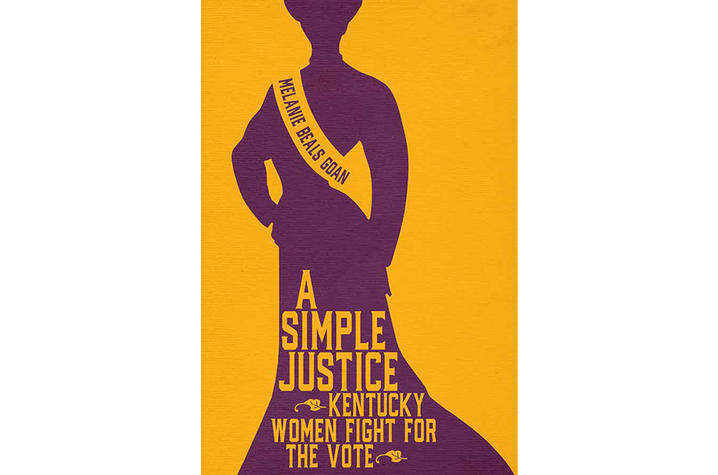 This timely study introduces readers to individuals across the Bluegrass State who did their part to move the nation closer to achieving its founding ideals.

LEXINGTON, Ky. (Nov. 17, 2020) — When the Declaration of Independence was signed by a group of wealthy white men in 1776, poor white men, African Americans and women quickly discovered that the unalienable rights it promised were not truly for all.

The 19th Amendment eventually gave women the right to vote in 1920, but the change was not welcomed by people of all genders in politically and religiously conservative Kentucky. As a result, the suffrage movement in the Commonwealth involved a tangled web of stakeholders, entrenched interest groups, unyielding constitutional barriers and activists with competing strategies.

In this new release from the University Press of Kentucky, “A Simple Justice: Kentucky Women Fight for the Vote,” historian and University of Kentucky faculty member Melanie Beals Goan offers a deeper understanding of the women's suffrage movement in Kentucky by following the people who labored long and hard to see the battle won.

Goan looks beyond iconic women such as Susan B. Anthony and Elizabeth Cady Stanton to reveal figures whose names have been lost to history. Laura Clay and Madeline McDowell Breckinridge led the Kentucky movement, but they did not do it alone. This timely study introduces readers to individuals across the Bluegrass State who did their part to move the nation closer to achieving its founding ideals.

"A fast-paced, compelling story about women who persisted year after year to secure their right to vote," said Melissa McEuen, coeditor of "Kentucky Women: Their Lives and Times." "Goan shows us a world where religious conviction, regional discord, reform movements, racism, and many other forces shaped and reshaped Kentucky's citizen-activists. And while these savvy women helped steer a national conversation on political equality, they disagreed mightily about how to reach their goals. In Goan's sure hands, this isn't just a Kentucky story; it's an American story."

Goan is an associate professor of history in the Department of History in the UK College of Arts and Sciences. Her research focuses on women’s history in the United States, with specific interest in Appalachia/Kentucky and medical history. She is the author of “Mary Breckinridge: The Frontier Nursing Service” and “Rural Health in Appalachia.”