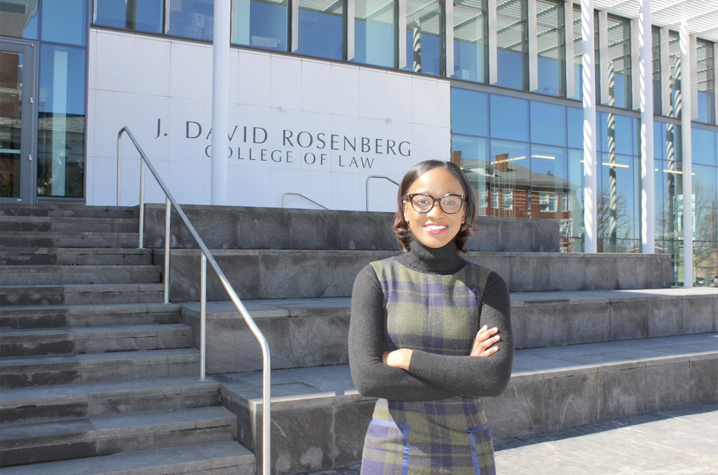 Kelly Daniel will serve as the first Black editor-in-chief of the J. David Rosenberg College of Law Kentucky Law Journal (KLJ) for the 2021-2022 academic year.

Daniel, a native of Boston, recalls one of her most memorable experiences in law school when, during her first year, she and other members of the Black Law Students Association (BLSA) traveled to Louisville, Kentucky, to attend a small gathering hosted by alumnus Steven Reed (’86).

According to Daniel, Reed told the students that leaders were needed across student organizations, and they shouldn’t limit themselves to one group. “And I took that with me throughout my time at UK, and I think that … really gave me the motivation to decide to run for editor-in-chief,” Daniel said.

“KLJ has been intentional this past year in its efforts to increase interest among diverse students to participate in the process for being selected to law journal,” said Danny Murphy, senior assistant dean of community engagement and operations/chief diversity officer. “Ms. Daniel being selected as its first Black EIC is evidence of great results stemming from having a broader representation and participation of highly talented individuals, who happen to also be diverse. Congratulations to Ms. Daniel and congratulations to KLJ for their commitment that shows UK Rosenberg Law is a place where diversity and inclusion are valued.”

"Ms. Daniel represents the kind of dedicated, talented, and passionate student we have at UK Rosenberg Law,” UK Rosenberg Law Dean Mary J. Davis said. “She will be a great leader of the Kentucky Law Journal and will enhance any community where she takes her legal talents. Congratulations to her, and the KLJ.”

As an undergraduate at Suffolk University in Boston, Daniel studied psychology. However, growing up, she saw her peers and classmates going to jail or prison, and she felt that adequate services were needed in her community to prevent that outcome. In addition, “there were few attorneys who looked like me,” Daniel said.

Daniel is a first-generation college graduate whose parents immigrated to the United States from Haiti. She worked at a criminal defense firm and then worked in the intellectual property department at a corporate law firm before enrolling in law school at UK in 2019.

Daniel applied to law schools across the country because she wanted to experience being away from home. She studied abroad in the Czech Republic as part of an honors program during her second year of college, and Daniel felt that she focused best when among strangers.

Daniel applied to law school at UK because of an application fee waiver, but a personalized note on Daniel’s acceptance letter from the admissions director won her over.

“It was clear that they looked at my entire application from top to bottom. They knew who I was, and accepted me for who I was,” Daniel said. “They thought that I would be a good addition to UK, and that sold me.”

Daniel said little can prepare a student for the rigor of law school, but four years of work experience between receiving her undergraduate degree and entering law school helped her to hone time management skills.

“The professors make this experience incredibly worthwhile,” Daniel said. “The coursework can be intimidating, but “every professor I’ve had has been willing to sit with me and help me understand dense legal material.”

Asked for advice she would give future students of color who want to serve on the KLJ board or as editor-in-chief, Daniel said students should talk to people on the board and attend events.

“Very few people know about what law review entails until they’re members,” Daniel said. “I thought that my questions were silly, but in actuality, they were reasonable questions.”

Daniel said she is excited about the upcoming year as EIC.

“I feel honored and am truly grateful that my peers thought I’d be best for this important position,” she said. “It still feels surreal.”