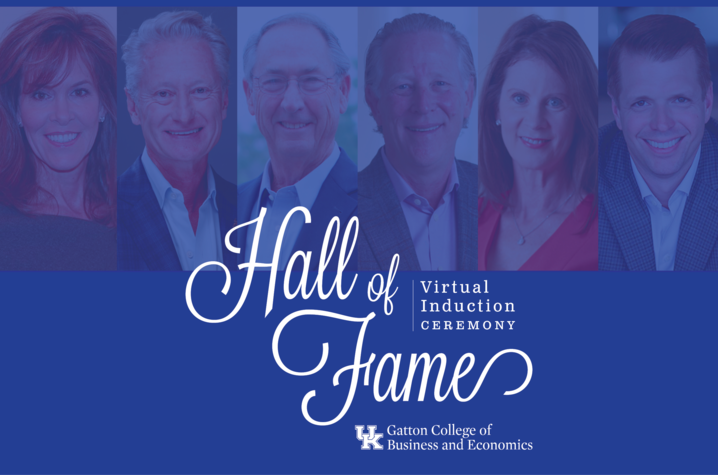 LEXINGTON, Ky. (June 1, 2021) — The University of Kentucky Gatton College of Business and Economics has inducted five members into its Alumni Hall of Fame.

The prestigious lifetime award recognizes Gatton alumni who have earned exceptional success in their careers and in their communities.

Welcomed into the hall of fame in a virtual event on Thursday evening, the 2020-2021 inductees are:

Dietrich is the senior managing director and head of America’s Corporate Sales and co-head of Upstream Oil and Gas for Macquarie Group’s Commodities and Global Markets division in Houston, Texas. She is a founding board member for the HAY Center and the Houston BARC Foundation and serves on the Finance Advisory Board at Gatton College.

Hemmings is the president and CEO of Provident Entertainment, a Sony Music Entertainment company in Nashville, Tennessee. He serves on the Recording Academy’s Board of Trustees, as well as the boards of the RIAA, Gospel Music Association and The Gospel Music Trust Fund.

Mabry served as president of The University of Texas (UT) at Tyler from 1998 to 2016. He led UT Tyler through an evolution — from a primarily commuter college to a comprehensive university that plays a significant role in the education and economic growth of the East Texas region. Additionally, Mabry has served on numerous civic and university boards in the Tyler community.

Thurston is a nationally recognized attorney in the commercial real estate industry. Based in Atlanta, Georgia, she is a partner with the global law firm of Alston & Bird LLP.  Thurston is a partner in the Financial Services & Products Group and leads the firm’s Real Estate Investment Trust (REIT) and Real Estate Funds team. Thurston also serves on the Gatton College Dean’s Advisory Council.

Thurston is the owner and principal of NetMOVE — a moving and storage company with locations in Georgia and North Carolina. He is a CPA with more than 35 years of experience in managing complex financial service operations in large corporate organizations. Additionally, Thurston serves as the chairman of the Emory Alliance Credit Union Board of Directors.

“Our 27th class of the Alumni Hall of Fame are among the finest and most accomplished graduates of the Gatton College of Business and Economics,” Simon Sheather, dean of Gatton College, said. "As members of the hall of fame, these five inductees join a group of outstanding individuals who have demonstrated leadership, creativity, service and excellence in all they do.”

On Thursday, Gatton College also presented the Distinguished Young Alumni Award to Nathan Winters, chief financial officer of Zebra Technologies in Lincolnshire, Illinois. The award is the college’s highest honor bestowed upon an alumnus under the age of 45.