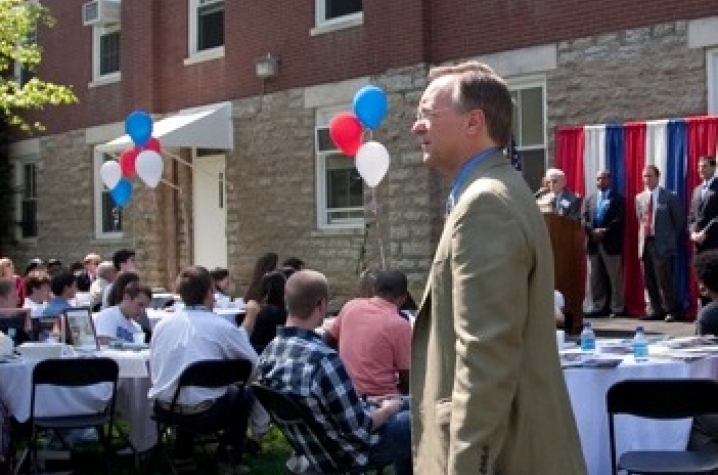 LEXINGTON, Ky. (April 16, 2010) - Hundreds of people, including high school and college students, faculty, staff and community members, gathered Wednesday to hear the views of six candidates for the U.S. Senate at a forum on the lawn of the University of Kentucky Student Center.

"How many? Well, let's just say we cooked 600 hot dogs on the patio grills and we had no leftovers," said Buck Ryan, director of the Citizen Kentucky Project of the Scripps Howard First Amendment Center at UK.

Ryan's freshman Discovery Seminar Program class, "Citizen Kentucky: Journalism and Democracy," invited all 10 candidates from the Kentucky Senate race to the event as a class project that combines research with public service.

Provost Kumble Subbaswamy opened the forum by citing Winston Churchill's famous quote about democracy: "It has been said that democracy is the worst form of government except all the others that have been tried."

Ryan then invited all the candidates and their high school and college questioners to the stage to recite an excerpt from the poem "Horatius at the Bridge" that Churchill memorized at the age of 13, and it was dedicated to all those facing "fearful odds," including soldiers fighting for freedom, candidates feeling down in the polls and teachers trying to teach civics.

"The Citizen Kentucky Project is about civic education, especially about engaging young people in civic life," Ryan told the gathering.

The forum is available to watch online at Wildcat Student Television at http://wildcatstudenttv.org/?p=416.