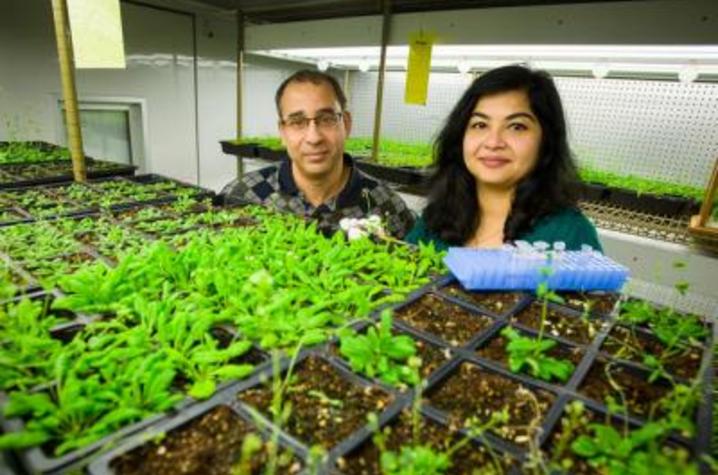 LEXINGTON, Ky., (April 22, 2016) — Faced with a pathogen, important signaling chemicals within plant cells travel different routes to inform the plant to turn on its defense mechanisms, according to a recent University of Kentucky study.

Plant pathologists Aardra and Pradeep Kachroo study how plants fend off secondary infections, a defense mechanism known as systemic acquired resistance. In previous studies, the UK College of Agriculture, Food and Environment scientists identified several chemicals within plant cells that help trigger this resistance. Their most recent study, published in Cell Host and Microbe, looked at the paths three of those chemicals travel. Understanding these pathways and chemicals may shed light on new ways scientists can help plants fend off a wide range of pathogens.

“Animals have a circulatory system that makes it very easy for one part of the body to communicate with another,” Aardra Kachroo said. “This is not the case for plants, which makes communication more difficult between various parts. That’s why it’s important for scientists to understand how that happens.”

Their research found that two of the chemicals travel through the same opening between cells, called the plasmodesmata. They are helped through this “doorway” by proteins that also control the opening and closing of the “door.”

The third signaling chemical, salicylic acid, the active ingredient in aspirin, travels a different route, going out of one cell into the plasma membrane and then into another cell.

“This is a similar route via which aspirin in taken up in the human body,” Pradeep Kachroo said.

In plants, after moving to the neighboring cell, salicylic acid can also shut the door in between the cells that the other two chemicals traveled through.

“This knowledge is very relevant to how we use chemicals for protecting our crops in the field,” Pradeep Kachroo said.

The Kachroos' results suggest that although current strategies of using chemicals that activate the salicylic acid pathway maybe an effective short-term strategy to manage specific diseases, it could potentially have long-term negative repercussions on the plant’s inherent ability to induce broad-spectrum systemic immunity.

Kachroo lab members who contributed to this work include Gah-hyun Lim, M.B. Shine and Keshun Yu. The Kachroos’ research was funded by the National Science Foundation’s Division of Integrative Organismal Systems.