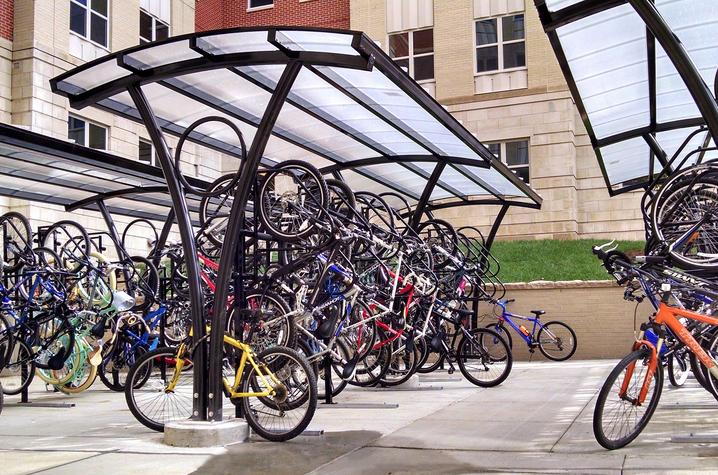 LEXINGTON, Ky. (Sept. 6, 2016) — University of Kentucky Parking and Transportation Services (PTS) demonstrated its continued commitment to investing in campus bicycle facilities this summer, with considerable improvements to both on-street and end-of-trip bicycle infrastructure.

The university worked with Lexington-Fayette Urban County Government in connecting two key segments of the existing campus and city bicycle road network. On Woodland Avenue, bike lanes were added from Rose Lane to Euclid Avenue. Rose Street between Rose Lane and Euclid Avenue is currently being widened to allow for bike lanes on both sides. This will provide a connection between the Euclid Avenue bike lanes and the Rose Street bike lanes. This project is currently in progress and expected to be completed in late September or early October.

Bicycle parking has been expanded or upgraded at multiple campus locations, including:

In total, these improvements signify more than 700 new or upgraded bicycle parking spaces on campus, nearly half of which are covered.

PTS invests over $200,000 annually in campus bicycle infrastructure, education and encouragement projects, many of which are guided by the leadership of the Bicycle Advisory Committee. These efforts have been recognized by the League of American Bicyclists, in designating UK as a Silver level Bicycle Friendly University.