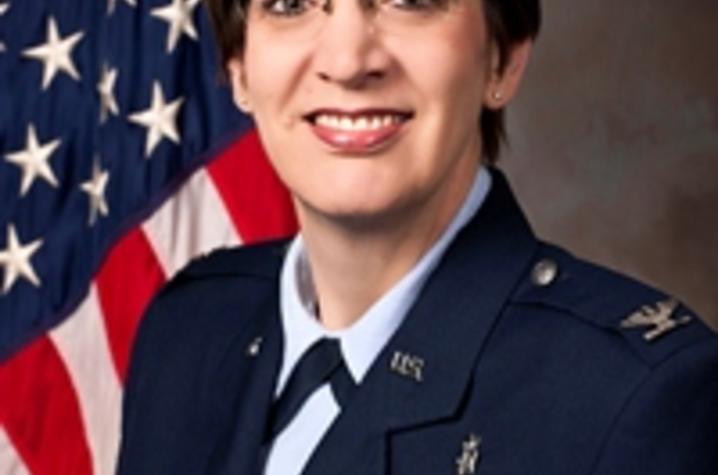 LEXINGTON, Ky. (Oct. 5, 2016) — A leader in military and civilian nursing, Col. Marla De Jong will discuss the nursing profession’s ability to elevate scientific knowledge as the first speaker in the 2016-2017 University of Kentucky College of Nursing Leadership Lecture Series.

A 2005 graduate of the UK College of Nursing, De Jong will deliver “Advancing Nursing Science through Leadership and Knowledge” on Oct. 6 at 4 p.m. in the UK Chandler Hospital Pavilion A auditorium.

De Jong serves as interim associate dean for research and director of the Faye Glenn Abdellah Center for Military and Federal Health Research. In addition, she is a U.S. Air Force advisor to the dean of the Daniel K. Inouye Graduate School of Nursing. Prior to this, she served as dean of the United States Air Force School of Aerospace Medicine.

In addition to her military nursing service, De Jong has contributed to nursing research, publishing 40 journal articles, one book and nine book chapters. Her interests include hypothermia, buccal pulse oximetry, aeromedical evacuation, and the linkage between anxiety and outcomes for patients with heart failure.

The three-part Nursing Leadership Lecture Series was created as a forum for nurses and health professionals in the community to examine leadership practices in an evolving health care environment. Future speakers include Tonda Hughes, associate dean for global health at the University of Illinois at Chicago College of Nursing, in April, and Kim Glassman, senior vice president of patient care services and chief nursing officer of New York University Langone Medical Center.

“Col. De Jong has shaped military and civilian clinical practice through her transformative research and scholarly achievements,” said Janie Heath, dean of the UK College of Nursing and Warwick professor. “We are honored to have someone of such high merit speak at this year’s Nursing Leadership Lecture Series.”