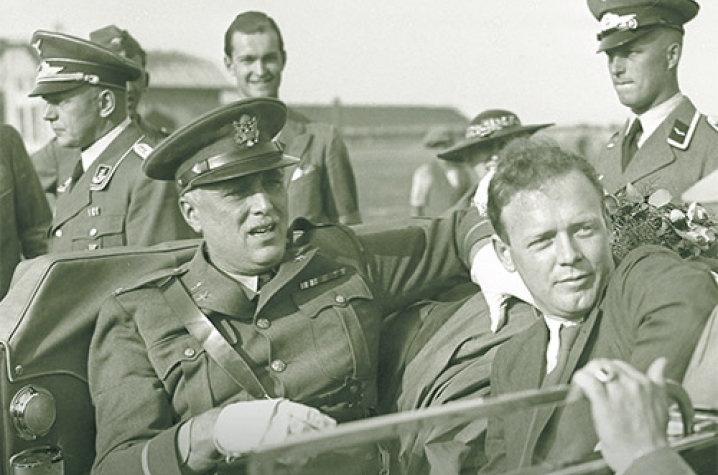 LEXINGTON, Ky. (June 24, 2014) — The Army Historical Foundation recently recognized outstanding contributions to U.S. Army history that were published in 2013. Among those select works honored by the foundation was “Exposing the Third Reich: Colonel Truman Smith in Hitler’s Germany,” by University Press of Kentucky (UPK) author Henry G. Gole, which won the Distinguished Book Award in the category of biography.

The Army Historical Foundation is a member-based, nonprofit organization dedicated to preserving the history and heritage of the American soldier. Established in 1983, the foundation funds projects such as educational programs, research, publication of relevant historical materials and the acquisition and preservation of Army artifacts.

"Exposing the Third Reich" was recognized at an annual awards program June 18, at the 17th annual Members’ Meeting at the Army-Navy Country Club in Arlington, Virginia. The finalists were judged by a select awards committee of distinguished military historians and writers against a set of criteria, including significance to U.S. Army history, historical accuracy, and quality of writing.

In the early 1930s, most military and political leaders in the United States and around Europe did not take Adolph Hitler’s rise to power in Germany particularly seriously. Col. Truman Smith was an exception. In “Exposing the Third Reich,” Gole tells this soldier’s story for the first time. An American aristocrat from a prominent New England family, Smith was first assigned to Germany in 1919 during the Allied occupation and soon became known as a regional expert. During his second assignment in the country as a military attaché in 1935, he arranged for his good friend Charles Lindbergh to inspect the Luftwaffe. The Germans were delighted to have the famous aviator view their planes, enabling Smith to gather key intelligence about their air capability.

Smith’s savvy cultivation of relationships rendered him invaluable throughout his service, particularly as an aide to Gen. George C. Marshall, however the colonel’s friendliness with Germany also aroused suspicion that he was a Nazi sympathizer. Gole demonstrates that, far from condoning Hitler, Smith was among the first to raise the alarm: he predicted many of the Nazis’ moves years in advance and feared that the international community would not act quickly enough. Featuring many firsthand observations of the critical changes in Germany between the world wars, this biography presents an indispensable look both at a fascinating figure and at the nuances of the interwar years.

Gole has taught at West Point, the U.S. Army War College, the University of Maryland and Dickinson College. In addition, he served as a rifleman in Korea and completed two tours as a Special Forces officer during the Vietnam War. He is the author of four books, including "General William E. Depuy: Preparing the Army for Modern War."

UPK is the scholarly publisher for the Commonwealth of Kentucky, representing a consortium that now includes all of the state universities, five private colleges and two historical societies. Led by Director Stephen Wrinn, its editorial program focuses on the humanities and social sciences. Offices for the administrative, editorial, production and marketing departments of the press are found at the University of Kentucky, which provides financial support toward the operating expenses of the publishing operation.