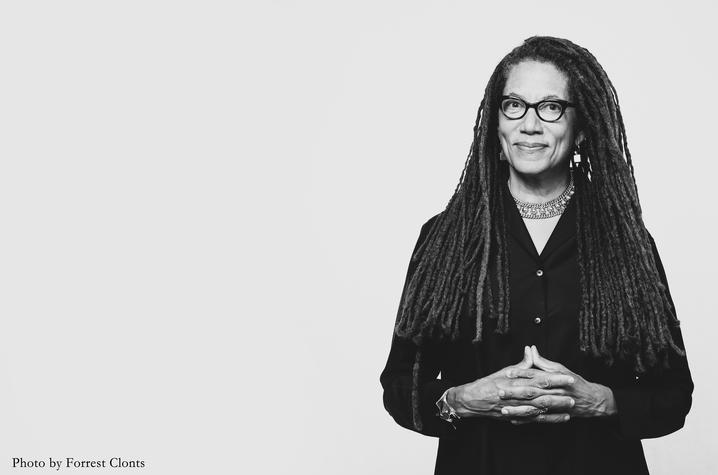 UPDATE 12-16-21: Nikky Finney is no longer attending the December 2021 ceremony. She will be awarded her honorary degree at a future ceremony.

LEXINGTON, Ky. (Dec. 16, 2021) — The University of Kentucky will present educator and author Nikky Finney with its highest honor tomorrow at the December 2021 Commencement Ceremonies.

Finney, who is the John H. Bennet, Jr. Chair in Creative Writing and Southern Letters at the University of South Carolina, will receive an Honorary Doctorate of Humanities during the 3 p.m. ceremony Friday, Dec. 17, at Central Bank Center at Rupp Arena.

Finney spent more than 20 years as a faculty member at UK where she held the Guy Davenport Endowed Professor of English. She was an influential educator and left a legacy of excellence in the departments of English, Creative Writing and African American and Africana Studies at UK.

Finney has written six books and dozens of poems and essays that explore and confront the experiences that have shaped life in the South for herself and countless other African Americans. Her work has been honored with multiple awards from organizations across Kentucky and the country — most notably the National Book Award for Poetry for her 2011 book “Head Off & Split.” Other honors include the NAACP Image Award for photography in 2012; awards from the Kentucky Arts Council and Kentucky Foundation for Women in 1994, 1995 and 1999; and the Golden Crown Literary Society Award in 2012.

Finney was active with UK’s Martin Luther King Center and helped co-found the Affrilachian Poets in 1991 to elevate voices and faces of the Appalachian region that had previously gone unrecognized by the world at large. She has further empowered African American writers and poets by serving as faculty on the Cave Canem Writing Retreat.

The honorary doctorate for Finney was approved and recommended by the University Faculty Senate and the Joint Committee on Honorary Degrees in 2020.

More information about Finney is available at https://nikkyfinney.net/.