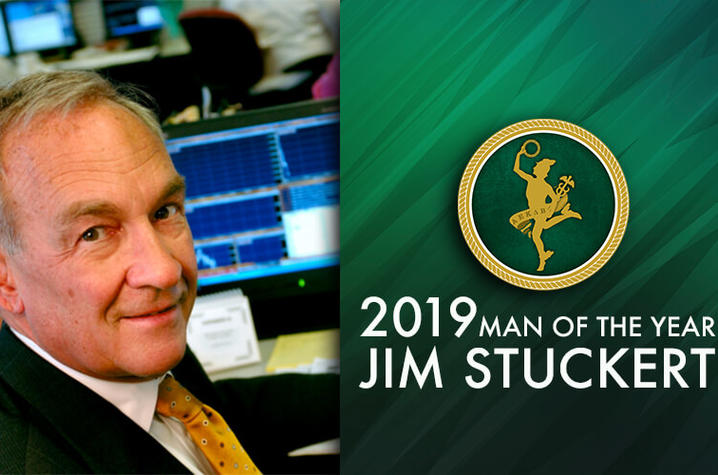 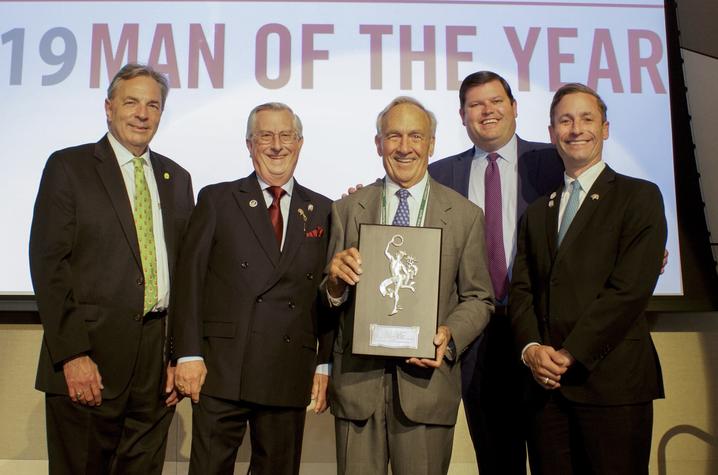 LEXINGTON, Ky. (April 14, 2021) — Active alumnus and generous friend of the University of Kentucky James Stuckert will be honored by the national fraternity that he joined as a freshman at UK. The Supreme Executive Committee of Kappa Sigma Fraternity selected Stuckert as the 2019 Kappa Sigma Fraternity Man of the Year. Delayed due to the pandemic, a special banquet recognizing Stuckert will be held Saturday, April 17, on the UK campus.

Stuckert is an April 22, 1956, initiate of the Beta-Nu Chapter of Kappa Sigma at UK, where he graduated with a bachelor's degree in mechanical engineering in 1960 and an MBA in 1961. He was heavily involved in the fraternity as well as being a member of Omicron Delta Kappa and Phi Tau Sigma chemical engineering honorary. During his undergraduate years, he served as business manager for the Kentucky Engineering Magazine and was the Student Government Association representative from the College of Engineering.

Stuckert had the following advice for UK students today, “Study hard, work hard, have fun, and learn to spend time wisely. Pay attention, be involved and always be a part of the solution, not the problem. Be a positive influence and appreciate what you have.”

Most of Stuckert’s professional career was with Hilliard Lyons, where he served as chairman of the board and chief executive officer from 1995 to 2003. His allegiance to UK has been evident in his service and philanthropy.

In 1976, Stuckert was elected to serve as president of the UK National Alumni Association and still remains on its board of directors. In 1980, he received the Distinguished Service Award for Exceptional Service to the UK Alumni Association. In 2009, Stuckert was appointed to the UK Board of Trustees for a term of six years. He served as vice chairman of the Board of Trustees and as chair of the board’s Finance Committee for five years. He also served as chair of the UK Presidential Search Committee in 2010 and 2011, resulting in the hiring of President Eli Capilouto.

Stuckert's service is equally matched by his philanthropic activities on behalf of the university. He has chaired the UK Development Council, a capital campaign and a fundraising committee for construction of the William T. Young Library. Stuckert is a Presidential Fellow and was recognized with the UK Career Center being named the James W. Stuckert Career Center in his honor in October 2000.

Stuckert was inducted into the Alumni Hall of Fame of the UK Gatton College of Business and Economics in February 1997. He was inducted into the UK Hall of Distinguished Alumni in May 2000 and to the UK Engineering Hall of Distinction in April 2002. Among other honors, Stuckert was the recipient of the Honorary Doctor of Letters from UK in May 2004.

“Jim Stuckert’s name is synonymous with everything that is excellent at the University of Kentucky,” said Kappa Sigma Fraternity Executive Director Mitchell B. Wilson, a fellow Beta Nu and UK alumnus. “There has not been a more loyal alumnus to our alma mater. He has constantly provided leadership to the University of Kentucky since the first day he set foot on campus as a freshman. The brothers of Beta-Nu Chapter have been blessed to have (his) guidance and support for the 64 years of his membership in Kappa Sigma. He has shared his treasure with the University of Kentucky, the Kappa Sigma Endowment Fund and the Beta-Nu Chapter and has been a significant role model and mentor for me personally. I treasure his friendship.”

Stuckert has remained active as a member Kappa Sigma and as an initiate of Beta-Nu Chapter throughout his life. He was involved in the founding of Kappa Sigma chapters at Western Kentucky University in 1964 as well as the University of Louisville in 1984. In 2008, he received the A Greater Cause Distinguished Alumnus Award from Kappa Sigma Fraternity.

Kappa Sigma is the largest college social fraternity in the world with more than 200,000 living members, including over 20,000 undergraduates and 320 chapters and colonies located throughout the United States and Canada. Founded in 1869 at the University of Virginia, Kappa Sigma international headquarters is based in Charlottesville, Virginia.