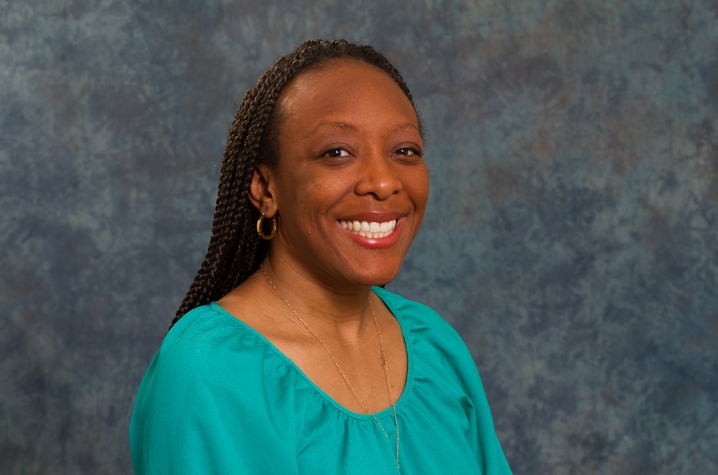 LEXINGTON, Ky. (March 23, 2015) — Concussions and brain injury have become topics of social concern in response to controversies involving sports — namely the National Football League. But Tanea Reed, who earned her doctorate from the Department of Chemistry in the College of Arts and Sciences at the University of Kentucky, has been researching therapeutic interventions in traumatic brain injury since long before concussions became matters of public concern.

While Reed’s research predates popular interest in issues related to traumatic brain injury, she says her interest in this field is a direct result of her time spent working on her doctorate at UK — specifically her time in Patrick Sullivan’s laboratory at the Spinal Cord and Brain Injury Research Center.

“I had no interest before working at UK. This all sparked after I started on the project at UK and saw the impact this could have. That’s my research focus now — looking at therapeutic strategies for helping individuals after they’ve had an injury,” Reed explained.

Reed earned her bachelor’s at Virginia Tech, where she engaged in research on biomedical breakthroughs. She then came to UK to pursue her doctorate, and during her time at UK she also worked in a laboratory with Allan Butterfield researching protein profiles as indicators for the development of Alzheimer’s disease.

“Allan Butterfield was a great mentor. He encouraged me to apply for an international award for research, and I won it and got to present my work in Italy. I would have never done that on my own,” she said.

For Reed, the impact of her time at UK has as much to do with the cooperative atmosphere of the department as it does with exposure to new research fields. “One of the most important things was just the community aspect of working in a research lab where you’re in the same environment with like-minded individuals who have the same goals you do,” she said. “There is a built-in community of support.”

In the fall of 2014, Reed helped form the Chemistry Alumni Board, a group aiming to help alumni stay connected with the UK chemistry department and promote the work done by department graduates. “So many different alumni are all over the world doing chemistry and science, and nobody knows about it. One of the reasons for the network is to keep chemistry alumni involved with what’s going on in the department,” Reed explained.

“When you’re in graduate school you’re in close proximity and you make really good friendships and relationships. But when you graduate that sadly ends. Fixing that is really the focus of the alumni board,” she continued.

Reed is currently an associate professor at Eastern Kentucky University (EKU), where she specializes in proteomics (the study of the structures and functions of proteins), Alzheimer’s disease and traumatic brain injury. She says she was planning on working as a research scientist before her experiences as a tutor near the end of her studies at UK.

“I was working with students and really started enjoying it, to see that light bulb moment where they really start to understand what something means and how ideas connect. After that I thought I wanted to go into teaching,” she explained. After leaving UK, Reed taught at Berea College before moving on to EKU — coincidentally filling a position previously held by a co-researcher from Allan Butterfield’s lab at UK.

She finds her work at EKU particularly rewarding because smaller classes help her connect with students and because she has the chance to expand the institution’s culture of research. The research side of Reed’s work allows her to expose students to intellectual and professional opportunities they hadn’t considered before.

“When you give them opportunities to do a project with you — that really unlocks a passion in research for different students. Then they apply to graduate school, they work as a research scientist — it really is a benefit to them,” she said.

And for students interested in graduate research, Reed would encourage them to follow in her footsteps at UK’s Department of Chemistry.

“UK is a great place to go to graduate school for the community aspect and the fact that they really want you to succeed — they want you to be the best you can be,” Reed said.