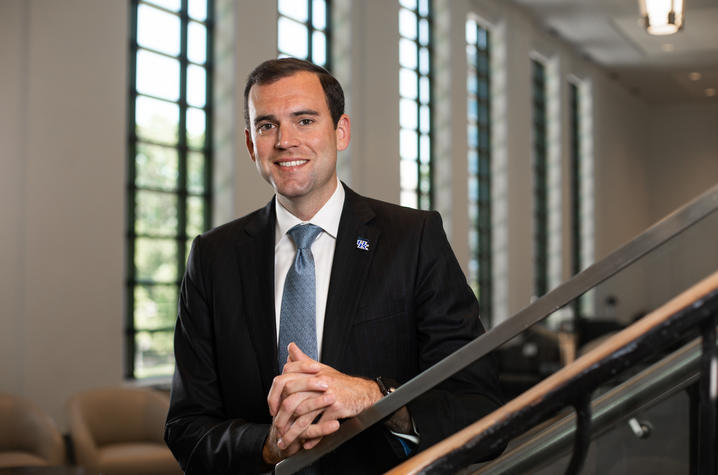 LEXINGTON, Ky. (May 21, 2021) — Eric King, executive director of federal relations for the University of Kentucky, was honored Thursday by the Association of Public and Land-grant Universities (APLU) for his overall successful congressional advocacy efforts for higher education and most recently for leading the higher education advocacy effort that resulted in federal COVID-19 relief funding for public colleges and universities nationwide.

The Coronavirus Aid, Relief, and Economic Security Act (CARES Act) passed by Congress included the Higher Education Emergency Relief Fund (HEERF) that provided millions of dollars for college and universities to overcome the challenges posed by the pandemic and continue providing high-quality education to the country’s students.

The APLU is a research, policy and advocacy organization dedicated to strengthening and advancing the work of public universities in the U.S., Canada and Mexico. The association's membership consists of 244 public research universities, land-grant institutions, state university systems and affiliated organizations.

During the APLU’s Council on Governmental Affairs (CGA) virtual spring meeting, King was presented with the prestigious Jennifer Poulakidas Outstanding Achievement Award that is given for outstanding, specific contributions to, and achievements in, university governmental relations.

“I am honored to be receiving such an important award. Thank you to my colleagues in the APLU community for this recognition,” King said. “I am truly humbled to work for the University of Kentucky and with colleagues that inspire me every day.

“Advocacy in Washington, D.C. has drastically changed over the past year and has required us to innovate and work together more than ever. I want to acknowledge the prolific work done by each member in this community and the meaningful contributions they make to their institutions and the people they touch.”

As executive director of federal relations at UK, King represents the university and its federal priorities in Washington, D.C., while building upon and maintaining its relationships with members of Congress, their staffs, and federal agencies.

Speaking at the award presentation, UK President Eli Capilouto noted how valuable King’s work in the nation’s capital has been to UK and the APLU.

“Eric has unmatched integrity, and with that comes a deep trust in his ability to carry out critically important responsibilities ...not just on behalf of the University of Kentucky, but as a representative for public and land-grant universities,” Capilouto said.

In nominating King for the Jennifer Poulakidas Achievement Award, Steven Beckham, director of federal relations at the University of South Carolina said, “Eric King has contributed immensely to the advocacy success of APLU institutions through his effective lobbying and deep collaboration with APLU Gov Affairs and the CGA.”

“Eric has made incredible contributions in advocacy to support public universities and those we serve,” said Craig Lindwarm, vice president of governmental affairs at APLU. “This award is a reflection of his accomplishments, appreciation for his partnership, and the high esteem in which he is regarded by his public university government relations colleagues throughout the nation.”

“As Council on Governmental Affairs chair and federal relations officer for the University of Florida, I’ve seen firsthand the tireless work Eric has contributed to our university advocacy community,” said Alex Krigstein. “His strong political sense and can-do attitude always pushes the CGA to achieve our shared goals. To my friend and colleague, congratulations on receiving the Jennifer Poulakidas Outstanding Achievement Award.”

Before coming to UK seven years ago, King served as senior advisor to Senate Minority Leader Mitch McConnell in Washington, D.C. In several pivotal roles over five years in the U.S. Senate, King served as an adviser on energy, agriculture and environmental policy. He played a significant role in managing Senate passage of the Farm Bill, which ushered in the legalization of hemp production and research. During his tenure in the Senate, King developed an extensive network of contacts among congressional offices and federal agencies. King is a graduate of Murray State University, where he was student body president and a member of the university’s Board of Regents.