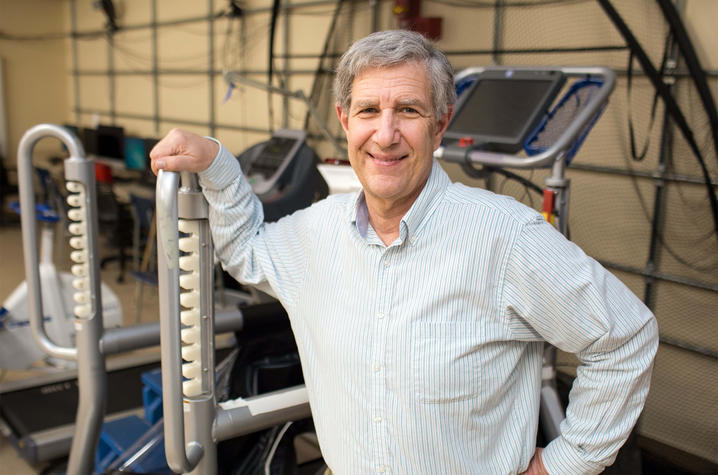 LEXINGTON, Ky. (Sept. 24, 2020) — Robert Shapiro wants students to chase their wild ideas — scientifically, yes, but also with a bit of audacity, a willingness to take risks.

That's what Shapiro did in the 1970s, and he found that pursuing his curiosity led him to groundbreaking research, which recently landed his work in the National Baseball Hall of Fame.

Shapiro was the founding director of the University of Kentucky’s multidisciplinary biodynamics laboratory, studying the science of biomechanics and human performance. Growing up in Brooklyn, New York, he was not aware of the biomechanics field, or that he could connect his aptitude for mathematics and science to the world of sports.

His first love was baseball. A young Shapiro was there in 1962 when the Mets won their first home game at the Polo Grounds, and his uncle took him to his first game at Yankee Stadium in the late 1950s. He attended Mickey Mantle Day with his father on Sept. 18, 1965, when a subway ride was 15 cents.

He played varsity baseball and soccer at Brooklyn College, where he intended to become a physical education teacher and coach. While applying to schools for his master’s degree, a coach recommended sending an application to Penn State. The moment was serendipitous.

“I got a call from the director of PSU’s Sports Research Institute,” Shapiro said. “He had looked at my materials and saw I had taken calculus and physics and offered me a research assistantship in the institute. I somehow landed in the best sport biomechanics program in the world at the time. My student colleagues at Penn State were the future leaders in the field. My professors were world leaders in the study of biomechanics. This unique experience couldn’t have been planned, it just happened. I had no idea what biomechanics was when I went there.”

Shapiro’s master’s degree thesis was on baseball batting mechanics. Later, during his doctoral dissertation at the University of Illinois, he developed methodology to perform 3D analysis of movement which he applied to baseball batting.

“The White Sox agreed to provide funds and the opportunity for me to collect data on pitching at their games,” Shapiro said. “I started taking high-speed films of pitchers during games, which nobody else was doing at the time. The pitching coach and manager were interested in the work. The research went on for a number of years. I wrote a report for them in 1983, which is now part of the collection in the hall of fame.”

The high-speed film Shapiro used captured beautifully clear details, such as how the hand moves during the release of different pitches. Shapiro would use the film to take measurements, such as the length of the pitcher’s step and the timing of pitch phases.

“We could do some rudimentary things they had never thought about doing,” Shapiro said. “When seeing movements at 30 pictures a second, there’s a lot of motion from picture to picture that you don’t see, so your brain just paints the image and it looks like a continuous image. Filming at 250 fps, you actually see the true motion. When I showed the team and coaches how a pitcher releases a ball, they said, ‘No, that’s not how you do that.’ In reality, they hadn’t seen it before, because it happens too fast. The film provided the images they couldn’t see, like motion of the arm or legs they thought only occurred on certain pitches, but actually happened on every pitch.”

Shapiro’s time with the White Sox continued into the 1990s after taking a faculty appointment at the UK College of Education in 1985 in the Department of Kinesiology and Health Promotion. He mentored students studying biomechanics where his baseball footage became teaching material. Over time, the lab expanded biomechanical analysis to other sports, such as Olympic diving, golf, horseback riding, sprinting, tennis, rifle, football and — being at UK of course — basketball, as well as less athletic endeavors, such as mechanics related to factors contributing to ACL injuries, measuring the gait of people with different types of artificial knee implants, the gait of children with cerebral palsy and the effect of body armor on performance in soldiers.

In 2017, when Shapiro retired from the UK College of Education, among his gathered belongings lay the box of 16mm films he had taken during his time working with the White Sox.

“I was looking around my house, and I had this box of film and thought, ‘Who would be interested in this?’” Shapiro said. “I found the name 'Roger Lansing' at the Baseball Hall of Fame and emailed him. I sent him a film of Tom Seaver, a Hall-of-Famer, who pitched for the White Sox in the1980s. I told Roger, ‘I have 80 rolls of film like this from games, regular season and spring training, some hitting, mostly pitching.’ He said, ‘Let me take it to the acquisition board.’ The next day, he emailed back and said, ‘We would love to have this.’ When we talked, he said, ‘I think these are the only kind of films like this that exist for that time period.’”

Shapiro is glad the films, the "Dr. Robert Shapiro Collection," will be taken care of into the future by archivists at the hall of fame. While motion analysis has been revolutionized by the arrival of new digital capabilities, Shapiro was a pioneer in the field. He shares his experience with students today to help them see possibilities for their careers.

“The human body in motion is very complex,” Shapiro said. “I was always good at math and science, but when you sat in math class, nobody ever made an application to sport. Math and science have a tremendous application in fields like biomechanics, sports medicine and orthopedics. Just over the last 30 to 40 years, the field has exploded.”

To learn more about majors and graduate programs in the UK College of Education Department of Kinesiology and Health Promotion, visit https://education.uky.edu/khp/.