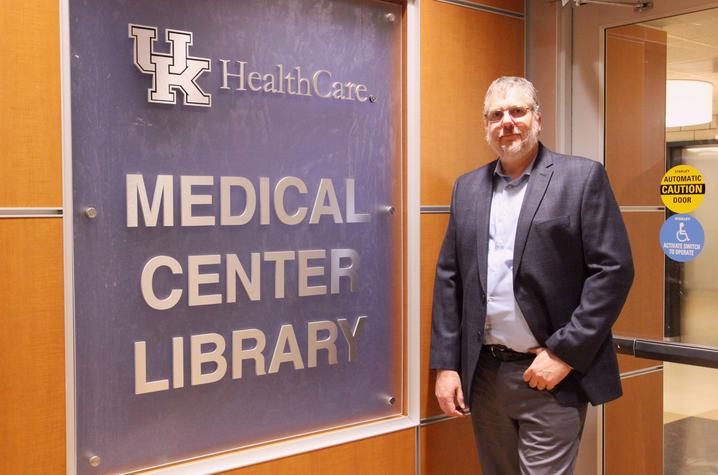 LEXINGTON, Ky. (Sept. 29, 2022) — University of Kentucky Libraries Associate Professor Jason Keinsley has been named the 2022 Outstanding Senator by the University Senate. Keinsley works within the Medical Center Library as a liaison to the College of Agriculture, Food and Environment and previously held the position of agriculture librarian for seven years.

“Jason demonstrated exemplary service to the University Senate during his tenure as a senator,” said Senate Council Vice Chair Leslie Vincent, who convened the subcommittee that reviewed nominees for the Outstanding Senator Award. “He volunteered to serve as the chair of the University Senate Hearing Panel twice in the last two years. This process has not been used very often at the university and required a great deal of time and dedication on his part. He represented the senate well in the ways he and his committee dealt with sensitive matters. “

“Jason is an example of the person that the university and the senate in particular find so valuable. He volunteered where needed and went above and beyond the call of duty in the ways in which he served.” Collett added, “In his role with the University Senate Hearing Panel, he worked tirelessly to adhere to the senate process for such hearings, coordinate communication between relevant parties, and represent senate in a professional manner.”

Keinsley is no stranger to service work. He is the Libraries representative on UK’s International Advisory Council and also served on the Libraries Tenure and Promotion Committee. As part of his election to the senate by his colleagues in Libraries, he also became a member of the Libraries Faculty Council. His service within Libraries includes many years as a member and as chair of their Professional Development Committee. Keinsley is also a member of the Senate Retroactive Withdrawal Appeals Committee (SRWAC), which renders decisions on student appeals for retroactive withdrawals. He uses every opportunity that presents itself to elevate achievements and accomplishments of UK’s faculty librarians.

“Jason’s history of service throughout the university speaks to the depth of his contributions, as well as the breadth of the areas in which he has so capably served,” said Collett. “He has demonstrated incredible professionalism and diligence in his role as the chair of the University Senate Hearing Panel, as well as within his other roles.”